An unlikely venture between Disney's consumer products division and two edgy streetwear brands aims to yield some magic for all partners.

By Nola Sarkisian-Miller on May 19, 2005
View Slideshow 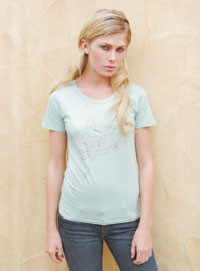 LOS ANGELES — An unlikely venture between Disney’s consumer products division and two edgy streetwear brands aims to yield some magic for all partners.

Disney’s licensing deal with British line Religion and Tokyo-based Hysteric Glamour is to produce Tinkerbell T-shirts, which are striking a chord with those consumers who aren’t ready to grow up or leave behind the characters of their youth. Hysteric Glamour product is hitting stores, such as Meltdown in Los Angeles, next month following its spring launch in Japan. Religion’s pieces arrived in stores earlier this season, including Kitson in Los Angeles and boutiques in London.

“We’re seeing all over the world that girl empowerment is a big issue, and we figured no character has more attitude than Tinkerbell,” said Dennis Green, senior vice president of Disney consumer products.

And, Green said, there’s more material to resurrect from the character well.

“‘Alice in Wonderland’ is in the pipeline,” he said. “When you see these characters inspiring other designers, it makes sense to resurface the properties.”

Religion’s spring pieces feature whip-stitched and raw-edged shirts with Tinkerbell in pencil prints, accented with foil text or appliqués. One highlight is a longer shirt with an allover Tinkerbell print. Hysteric Glamour’s take includes a ruffled tank top and boy-cut shirt featuring the fairy with a wand swatting at a star. For fall, it plans to add a silky, shaggy dress with an allover Tinkerbell print accented with Swarovski crystals. Both collections, which wholesale from $50 to $75, use their own labels, another way to impart hipness in the line.

This story first appeared in the May 19, 2005 issue of WWD. Subscribe Today.

“We think Tinkerbell can be cool again,” said Ken Kawaminami, general manager of Hysteric Glamour, which operates 50 stores in Japan and two in Hong Kong, along with its wholesale business. He expects the line to pull in about $500,000 in sales.

Retailers said adding a little pixie dust can’t hurt their inventory mix, even though they thought the collaboration was unusual.

“Surprising is a good word,” said Gaston Dominguez-Letelier, head buyer at Meltdown. “The pieces look very elegant and very simple. They’re iconic and it’s great to see Disney be flexible and Hysteric Glamour be receptive to their rules.”