WWD caught up with the designer the night before the Louis Vuitton show in Shanghai. 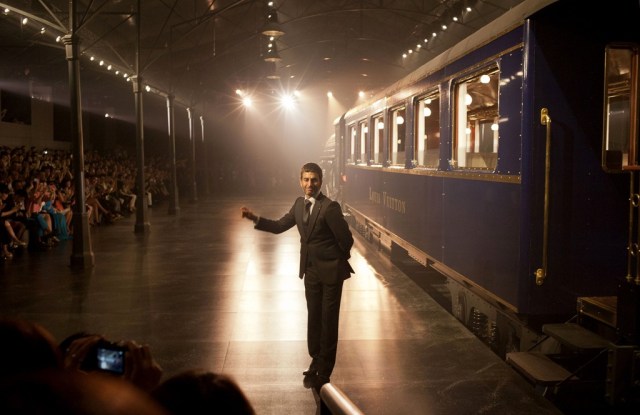 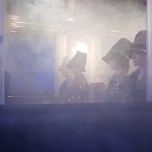 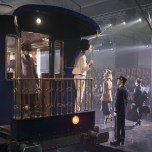 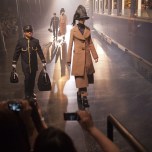 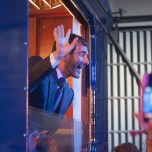 SHANGHAI — “When we first arrived it was dark, and seeing all the lights, I just thought, ‘Wow, it’s so futuristic-looking,’” Marc Jacobs said of his arrival in Shanghai. Though he has visited Hong Kong several times, this marks his first time to Mainland China. “The little time I’ve been here so far, I’ve enjoyed, and it looks cool.”

Jacobs made the trip for the major initiative celebrating the reopening on Wednesday of Louis Vuitton’s newly renovated, massive Maison store in the Plaza 66 shopping mall. Two days of festivities concluded Thursday night with a complete restaging of the brand’s fall travel-themed ready-to-wear show, for which the now-famous, specially commissioned train was shipped in.

WWD caught up with the designer the night before the show. Sporting a black kilt and red-and-black platform shoes (and a Band-Aid on his forehead, covering a cut sustained in a fall earlier in the week) he sat for an interview in an 85th-floor suite of the Park Hyatt, its windows overlooking the hazy skyline, a seemingly endless stretch of high-rise buildings. “It’s not like I’ve gone out late at night,” he said, explaining his limited impressions of the city. “I haven’t been too adventurous. I’ve not walked around the shops or done anything like that.” He did manage a visit to one antiques market and a dinner with Vogue China editor in chief Angelica Cheung.

The idea of restaging Vuitton’s train extravaganza in Shanghai came out of a conversation between the designer and LVMH Moët Hennessy Louis Vuitton chairman and chief executive officer Bernard Arnault after the original show in Paris in March. “He, of course, is very keen on us doing more things in Asia…and the next thing you knew, the train was being boated over to Shanghai,” Jacobs said.

He noted a key difference between doing the show here and executing the original one in Paris: having a complete collection. “It was so funny to see everything ready and made and finished, because the frenzy to put on this show in Paris was so different. [There] we were holding up one sleeve of an ostrich jacket and looking for a bolt of fabric that wasn’t in the right color but would eventually arrive in the right color later that evening.…The atmosphere downstairs [here] was so calm.”

Between puffs on Marlboro Golds, Jacobs noted that it’s “a good public relations practice” to take fashion shows on the road, bringing them closer to the actual consumers in various global markets. Yet he cautioned it’s important to keep such productions occasional, rather than routine, events. “You have to be a little bit careful. I think there’s something very special about doing something like this, if it isn’t something you do all the time,” he said. “It all sounds very exciting, but then when you read too often of the same thing, it sort of feels like, ‘Well, that is what everyone is doing’.…it doesn’t have the rarity or special, you know, feeling.”

Jacobs, who will be in Shanghai until this evening, is looking forward to checking out a few antique places and art galleries. A fan and collector of contemporary art, he is open to the possibility of collaborating with a Chinese artist at some point should the right opportunity present itself. Vuitton has famously collaborated with three Japanese creatives — Takashi Murakami, Comme des Garçons’ Rei Kawakubo and, most recently, Yayoi Kusama. Jacobs said it is mere coincidence that all three hail from the same country, and that he reacts to art instinctively rather than by nationality. “Any of the collaborations we’ve had or that I’ve participated in, it’s been very instinctive,” he said. “It was because of a particular artist or person whose work really affected me at that moment. If I had that experience with an artist anywhere in the world, you know, then I would certainly extend the same invitation.”

Similarly, Jacobs maintained the luxury sector’s fascination with China has not affected his creative process; rather, it is up to the merchandisers to adapt the product assortment to local tastes. “You kind of need to be free of working by demographics or anything like that,” he explained. “You just need to have a free, creative mind in order to really produce something that has the integrity of design.”

That said, marketing to the global landscape clearly presents its challenges. Just a few weeks ago, Jacobs’ name was trending on Weibo, China’s answer to Twitter, as Chinese Internet users complained about Marc Jacobs’ Free Tibet range of products. Some went so far as to propose a boycott. The chatter appears to have died down, and Jacobs seems eager to keep it that way. He added that the Free Tibet range of products was “short-lived” and no longer in production. He drew a parallel with how some people at LVMH reacted negatively to his own brand’s pro-Obama stance and anti-George W. Bush store windows four years ago, and said he’s learned a lesson.

“I guess politics and fashion, you’ve always got to be a bit careful because somebody’s going to get offended or somebody’s going to feel it isn’t right,” he offered. “I don’t want to sound stupid or ignorant or anything, but I spend my time in the studio choosing fabric and colors and trying to figure out what we’re going to make.…If you want to avoid controversy, you just don’t do [political] things like that.”

While he also hesitates to categorize global markets superficially, he acknowledges that even in his limited exposure to life in Shanghai, this trip has proved an eye-opener. “I hate to talk about places as if they are new markets or something like that. I mean, it’s not the way I think,” he said. “But to be in a particular place that I’ve never been before and, you know, to hear about how enthusiastic people are about fashion here…to bring [the train show] to somewhere to show people outside Paris. I think that is a nice thing if you afford to do it. This is going to be my big Shanghai moment.”