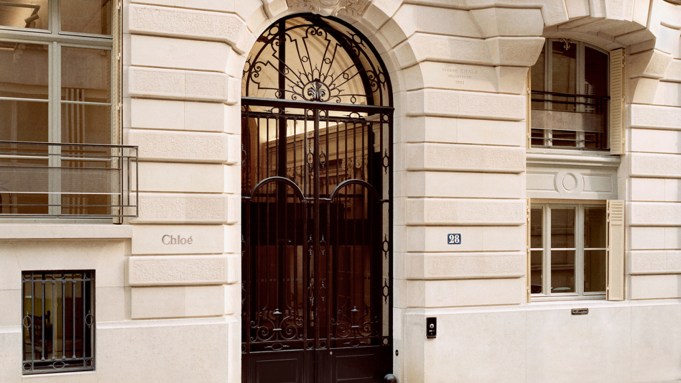 Located at 28 Rue de La Baume in the 8th arrondissement, a hop away from the brand’s headquarters on Avenue Percier, the lovingly restored, five-story, Haussmann-style building (think light herringbone parquet flooring and marble fireplaces) will have both a public and private function. It is home to the Chloé showrooms, VIP fitting rooms and working archives, but also boasts exhibition halls and events spaces, with a program of exhibitions designed to create a dialogue and provoke reflections around the subject of femininity and the story of the Chloé girl.

“Chloé girls now have a maison,” said Geoffroy de la Bourdonnaye, the brand’s chief executive officer. He described the site as being “open to all artistic expression [around femininity], a canvas of feminine freedom open to the world.”

“[House founder] Gaby Aghion dared to challenge the haute couture status. She hired haute couture talents to invent luxury ready-to-wear. She wanted to be independent, to work, but also look feminine and elegant therefore she injected fluidity, lightness and freedom into the modern wardrobe and empowered women,” he added. “Gaby was the first Chloé girl….Today the soul of Chloé is embodied by [the house’s new creative director] Natacha [Ramsay-Levi].”

Judith Clark, who curated the exhibition, said that starting with Bourdin, whose collaboration with the house stretched across three decades, opens the conversation “in earnest.” Clark also worked on the “Chloé. Attitudes. 1” exhibition for the house’s 60th anniversary, held at the Palais de Tokyo in 2012. “The photographer was closely associated with the house for years, but people don’t [necessarily connect the two.] They think of Charles Jourdan or maybe Thierry Mugler, but they certainly don’t think of Chloé, and I think it sheds light on both archives,” said Clark during a preview of the space.

“The Chloé girl needs to be humorous, she needs to be culturally curious, but, as you will see, she’s more diverse, she’s not perhaps the archetypal Chloé girl that is featured in some of the ad campaigns,” added Clark. “The archive shows her to be very different, and very conspiratorial. I’ve really tried to use the fact that it’s girls — plural — that there’s a kind of conspiracy between them that is exciting, and in Guy Bourdin’s hands, it’s of course more exciting, sexually exciting.”

Greeting visitors to the space is an archives-themed installation in the site’s mezzanine, titled “Chloé Girls: The Anthology A-Z.” Divided into 26 sections based on the letters of the alphabet, the theme of the exhibit, described by Clark as a “potted history of Chloé,” and the company’s designers, nods to Aghion’s habit of naming the looks in each of her collections after a specific letter.

The space will feature cabinets and drawers, decorative floors and pieces exhibited on mannequins and metal structures, partially covered in sheets of Tyvek, “so it’s like undressing a mannequin.” There will also be a couple of “guest appearances,” hinted Clark, with a recording of the alphabet and “a reimagining of one of the show catalogues as Chloé girls chatting.”

The Bourdin exhibition opens with cabinets presenting the photographer’s “favorite medium”: magazines. “It starts with how Parisian women would have encountered him and Chloé together,” said Clark. “Believe it not, between 1956 and 1986, there are all these very different stagings of Chloé clothing through the eyes of Guy Bourdin.”

The actual photos, “framed in white, as his estate prefers,” will be exhibited on the wall’s of the upper floors. Interspersed will be structures recalling the archives downstairs, with dresses that are featured in the photographs. “It shows the tale of two archives,” said Clark.