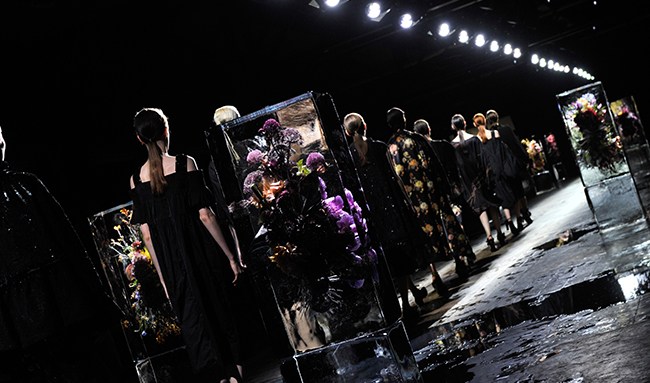 “Familiarity must be unsettled.”

A tough one to disagree with if you work in fashion, yet it happens all too infrequently. The statement comes from the show notes of John Galliano’s latest show for Maison Margiela — a heady exploration of creative unsettling — but it applies to fashion in general.

Too often today, the fashion of fashion gets short shrift, treated as something other than the main event, its primary value to fuel social media or be available to buy right now. But then we hit Paris, and all seems possible. John Galliano for Maison Margiela, Bouchra Jarrar for Lanvin and Dries Van Noten all showed collections that unsettled familiarity or expectations. For that matter, so, too, did Rihanna, who in her manner of showing her Fenty Puma by Rihanna collection and the clothes themselves – a romancing of ath-leisure-cum-lingerie – proved that a pop star show doesn’t have to be God-awful. Rihanna’s line was the anti-Roosevelt Island.

Sartorially speaking, unsettling familiarity isn’t easy. But creatively speaking, Galliano has never taken it easy. He wouldn’t think of it. He takes existing elements — current, historical, fantastical — and others of his own invention, and turns them into a kind of wondrous chic all his own. His is emotional fashion rooted in vivid imagination, endless research, skilled execution and most of all, a stratospheric level of talent. For spring, Galliano challenged our reading of the familiar in a collection that was compelling to watch, interesting, sometimes to the point of quizzical, and glamorous in ways obvious and out-there.

Don’t think of Galliano as an ath-leisure kind of guy? As with anything, it’s not the reference, it’s what you do with it. Galliano worked elements of sport in with other basics — trenchcoat, LBD, workwear, shirtings — in ways that made you rethink each one. Case in point: the trench, shown over and over, worn like a coat or slung around the body as a dress-cum-apron as only he would think to do. Along the way, athletic mesh became decorative flou; a thick, vibrant striped sweater was secured around the neck like a life vest; thick bubbles of rubber trimmed mohair; a wetsuit pulled off the torso formed a vibrant peplum over a neon skirt. Within this explosion of ideas, Galliano went back and forth between ease (two-piece sweater dressing) and polish (chi-chi belted suit). All together, it intrigued with a fanciful take on chic. Broken down, it was packed with great clothes.

The models wore cloche hats of sorts — a parade of fashion-sci-fi Mercurys. An intentional reference to the god known for having a thing for winged headgear? Perhaps. This collection was loaded with fabulous real clothes, and there were great looking bags, to boot. Among his other distinctions, Mercury is the god of commerce.

In her first outing for Lanvin, Bouchra Jarrar unsettled familiar notions very differently. It’s typical when a new designer takes over at an established house that she will do a deep dive into the archive, discover the “codes,” and find the points of convergence between them and her own vocabulary.

Not so with Jarrar. “I’ve been chosen for one thing,” she said during a preview in advance of her debut collection. “This is to be me, to make what I am, and I am interested in making fashion of today. So it’s Bouchra Jarrar for Lanvin. It’s Bouchra inspired by Lanvin.”

That self-assurance proved well-placed, as Jarrar’s first collection for the house was a study in unstuffy chic. It may also have been a study in savvy, as well. Unlike so many designers who find employment at major houses, Jarrar must come to grips not with the legacy of founder Jeanne Lanvin, but that of Alber Elbaz, who brought the house back from Nowheres-ville to the forefront of fashion, along the way making himself a beloved industry personality. He casts quite a shadow.

So it was smart for Jarrar to announce her arrival at Lanvin by doing Bouchra. She started with the elements that have won her acclaim — the perfect tailoring, the play of black and white, the incongruous pairings of materials — and worked from there. A pragmatist at heart, Jarrar believes that luxury (even couture) can function for everyday. Thus, her attention to tony sportswear, starting with her favorite combination: a perfecto jacket over pants. She went more languid with pin-striped suitings. That was Jarrar’s way of unsettling familiarity — Lanvin under Elbaz was never a go-to stop for tony separates. To that end, her era at Lanvin could be marked by the emergence of a business in chic basics — along the lines of first, Hedi Slimane and now, Anthony Vaccarello at YSL, only far more refined and not at all retro. That said, Jarrar knows that cocktail and evening are the backbone of the Lanvin identity. Here, she pushed herself to deliver flou in sheer, diaphanous white kilts, saucy minidresses and lovely bi-color gowns.

Still, Jarrar may find her confidence and her range tested. On the former point, she takes over the creative helm of a challenged business; both retail and wholesale have declined significantly since Elbaz’s departure. On the latter, while Jarrar has presented a new course for Lanvin, hers is a very specific vocabulary. It’s already highly refined. Now, her challenge will be to advance it.

Dries Van Noten has made unsettling the familiar a hallmark of his career. After last season’s dazzling treatise on gender identity (and how to work snake imagery with aplomb), he took spring as an opportunity to be less specifically story-driven, delving deeply into what seems like a basic idea: opposites. He intended the theme literally, during a preview running through a litany of specific clothing-related counterpoints: “from burlap to more sophisticated jacquards; black to white; oversize to small.” And, of course, the base contrast of feminine-masculine plays from harmonious to dissonant.

Van Noten showed on a set that instilled wonder, installed with a series of floral bouquets running the length of the runway. Big and joyful, yet frozen in giant blocks of ice by artist Azuma Makoto, they looked eerily beautiful. (In a bit of unintended contrast, the hands-off blocks of ice made the steamy show space feel all the hotter — sort of like the mirage of a crystal lake in the desert.)

The models walked between the two rows of floral ice. Among the contrasts they embodied was that of simplicity and adornment, so Van Noten opened with a perfectly plain white T-shirt and off-white canvas shorts. Around the neck: a small black Victorian embroidery. The counterpoints would intensify throughout the collection: the T-shirt gave way to intense jacket constructions; lowly white cotton and linen to big, splashy flowers and intricate silk jacquards; a hint of jeweling at the neck to major embroideries, the snappy white to black rendered as a deliberately mournful take on chic.

And chic it was. Van Noten is a master at making us feel so much emotion, we can lose sight of the parade of great merch passing by — almost. In typical fashion, he offered a trove of wardrobe wonders — great coats, dresses, skirts, pants — some plain, some fancy, all equal parts practical and powerful. Familiarity unsettled to fabulous effect.