Major Kimono Fashion Exhibition to Open at the V&A

Kimono exhibition "Kimono: Kyoto to Catwalk" at the V&A.

LONDON — The Kimono is arguably the most distinct Japanese garment to the world of fashion, and it has been a source of inspiration for European designers even before the Meiji Restoration when Japan reopened its border after 220 years of isolationist foreign policy.

With all eyes on Japan for the upcoming Olympic Games, London’s Victoria and Albert Museum is opening “Kimono: Kyoto to Catwalk” to showcase a full spectrum of the symbol of Japan, from style evolutions over the past 400 years to designer iterations from the 21st century. The exhibition will run from  Feb. 29 to June 21. 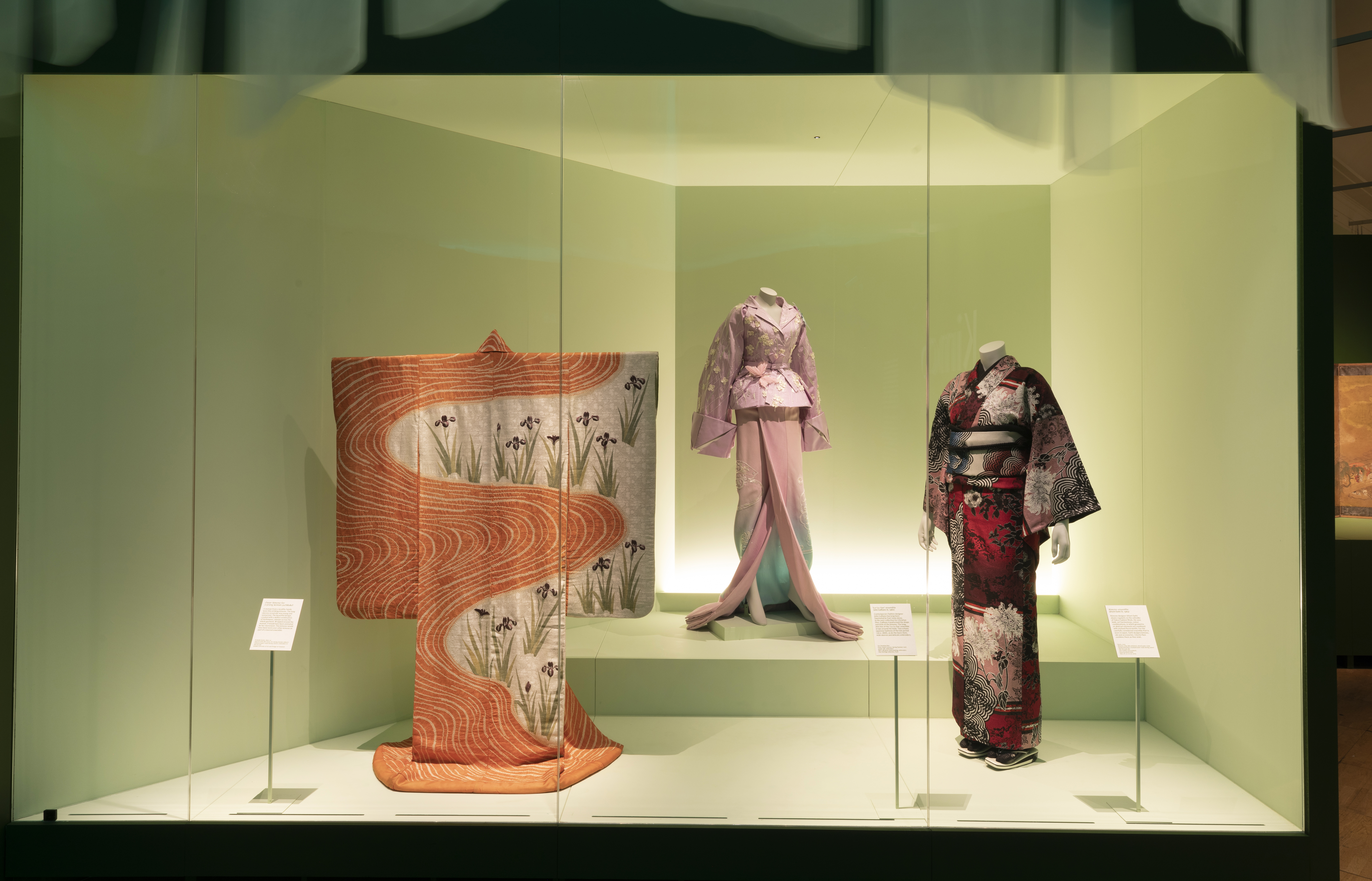 “Kimono: Kyoto to Catwalk” at the V&A.  Peter Kelleher/ Courtesy

Josephine Rout, one of the curators of the exhibition said the purpose is to show aspects of Japanese culture and history that people are less familiar with and hopefully inspire a new generation of designers.

“Many of them know about kimono, but they might not know that it’s had such a long, rich history, and it is such a key part of the global fashion history. Our main aim of the show is to inspire people. They might not be able to get to Japan, but they can come and see our exhibition,” she said.

The exhibition is divided into three parts: the first thing you see is a trio of kimonos from the early 19th century, John Galliano’s Dior era and Japanese designer Jotaro Saito’s design from last year, representing the past, present and future of the garment. 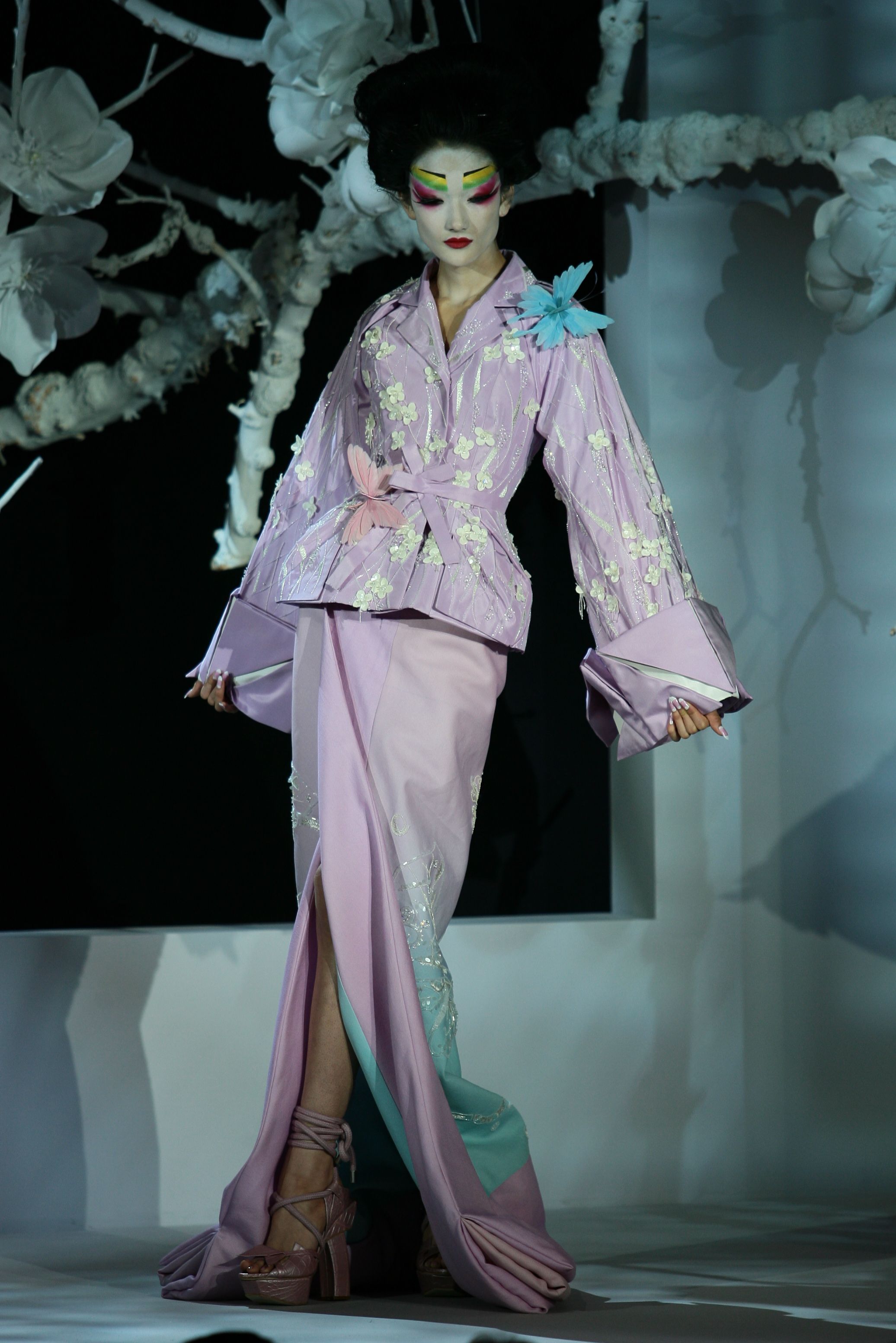 The first part of the exhibition features kimonos from the Edo period when Japan saw unprecedented growth. Luxurious embroidery of peonies and maple trees can be seen on multiple kimonos.

The highlight of this section is a late 19th-century outer-kimono that was made for a high-ranking courtesan to be worn on special occasions. It is richly embroidered with a man performing a kabuki play, clouds, flowers and a kirin, a mythical hooved chimerical creature.

Rout said this is the hardest part to curate as very few kimono from this era survived. “They are very rare and fragile. A lot of those pieces were borrowed from Japanese institutions,” she added. 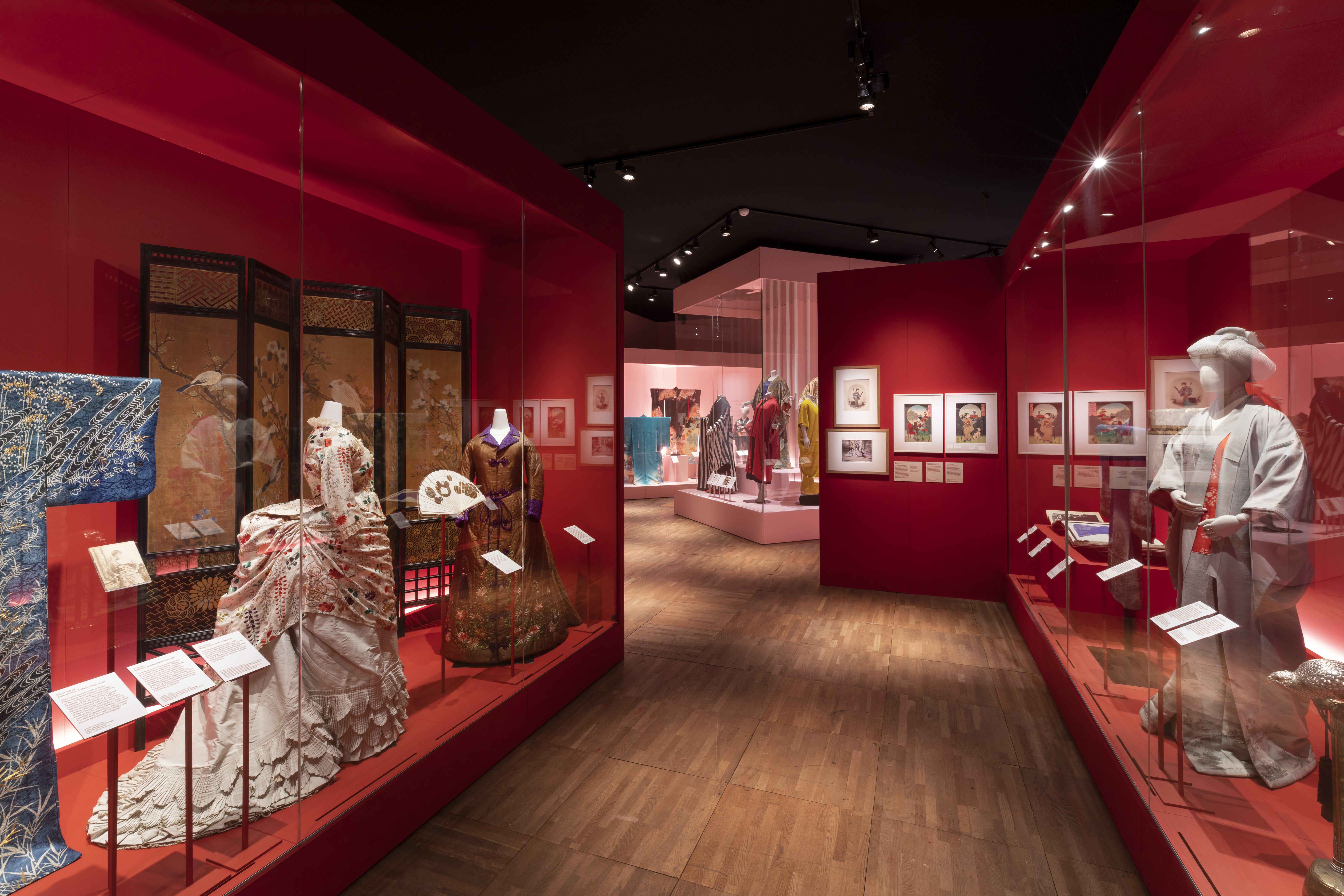 Kimono Exhibition “Kimono: Kyoto to Catwalk” at the V&A.  Left center: Sisters Margaret and Emma Turner, a dressmaking duo from the late 19-century re-tailored a kimono imported from Japan to a Victorian day dress for a client.  Peter Kelleher/ Courtesy

The second part showcases the kimono’s influence in the world. The Dutch East India Company was among the firsts to bring western fabric to Japan and ship kimonos back to Europe during the Edo period. Later on, with trade restrictions removed, a craze was developed for wearing kimonos and its straight-seamed shape exerted huge influences on European designers, especially in the early 20th century.

Society ladies from that period would use Japanese fabric to make court dresses and wear them when getting painted. For example, on display here is a Victorian day dress by sisters Margaret and Emma Turner, a dressmaking duo from the late 19 century. They retailored a kimono imported from Japan for a client.

There are some big names in this section as well. You can find a mustard yellow mantel from Paul Poiret, a red evening coat by Jeanne Lanvin, an evening dress by Lucile, designed by Lady Lucy Duff-Gordon and a cream-colored wedding dress by Madeleine Vionnet. These are some fine examples of Westen fashions inspired by the cocoon shape of a kimono. 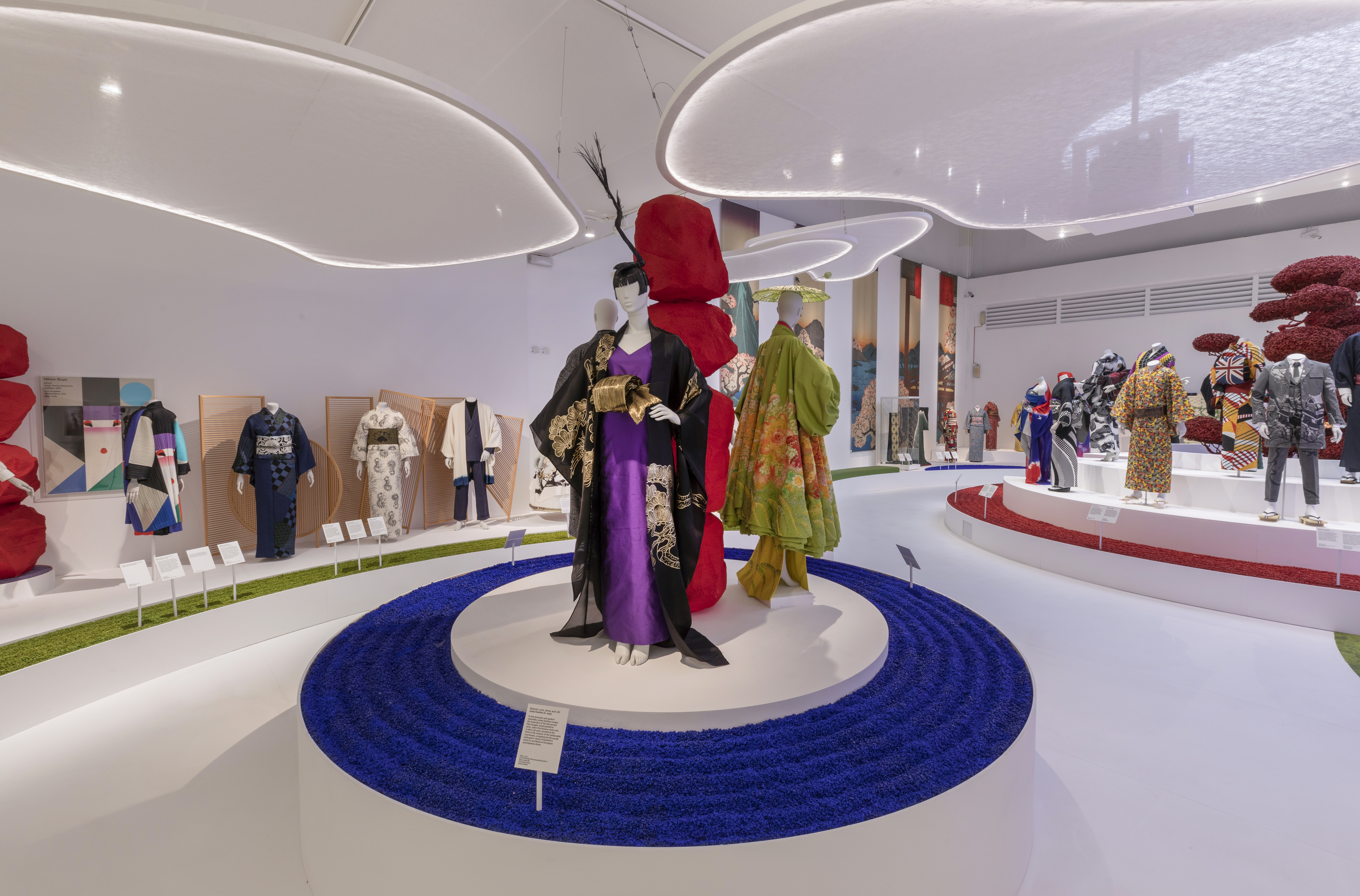 The final section of the exhibition is the most exciting part for fashion lovers, as it shows how the kimono has continued to inspire designers. Works from Yves Saint Laurent, Thom Browne, Duro Olowu, Bill Gibb and Hanae Mori, as well as Japanese designers Yohji Yamamoto, Rei Kawakubo, Jotaro Saito and Hiroko Takahashi and many more, are displayed in a futuristic Japanese rock garden setting.

Opposite them are a men’s kimono worn by actor Toshiro Mifune in “Sanjuro,” a 1962 black-and-white Japanese film directed by Akira Kurosawa, Oscar-winning costumes from “Memoirs of a Geisha” designed by Colleen Atwood and a gown worn by Queen Apailana, played by Keisha Castle-Hughes in “Star Wars: Episode III — Revenge of the Sith.”

Toward the exit of the exhibition, there are pictures showcasing how modern-day Japanese infuse kimonos into their street styles and a kimono, titled “Fuji Heartbreak,” specially designed by Milligan Beaumont, a recent Central Saint Martins graduate, for the exhibition. It features symbols of Japan such as Fuji mountain, koi fish, cherry blossom and several mystical creatures.

“I think that’s been the most exciting part of doing a show like this. She [Beaumont] was constantly sending us updates and asking us questions. Getting to meet the designers and learn about their processes, their motivations, their aspirations is what I enjoy the most about this exhibition,” Rout said. 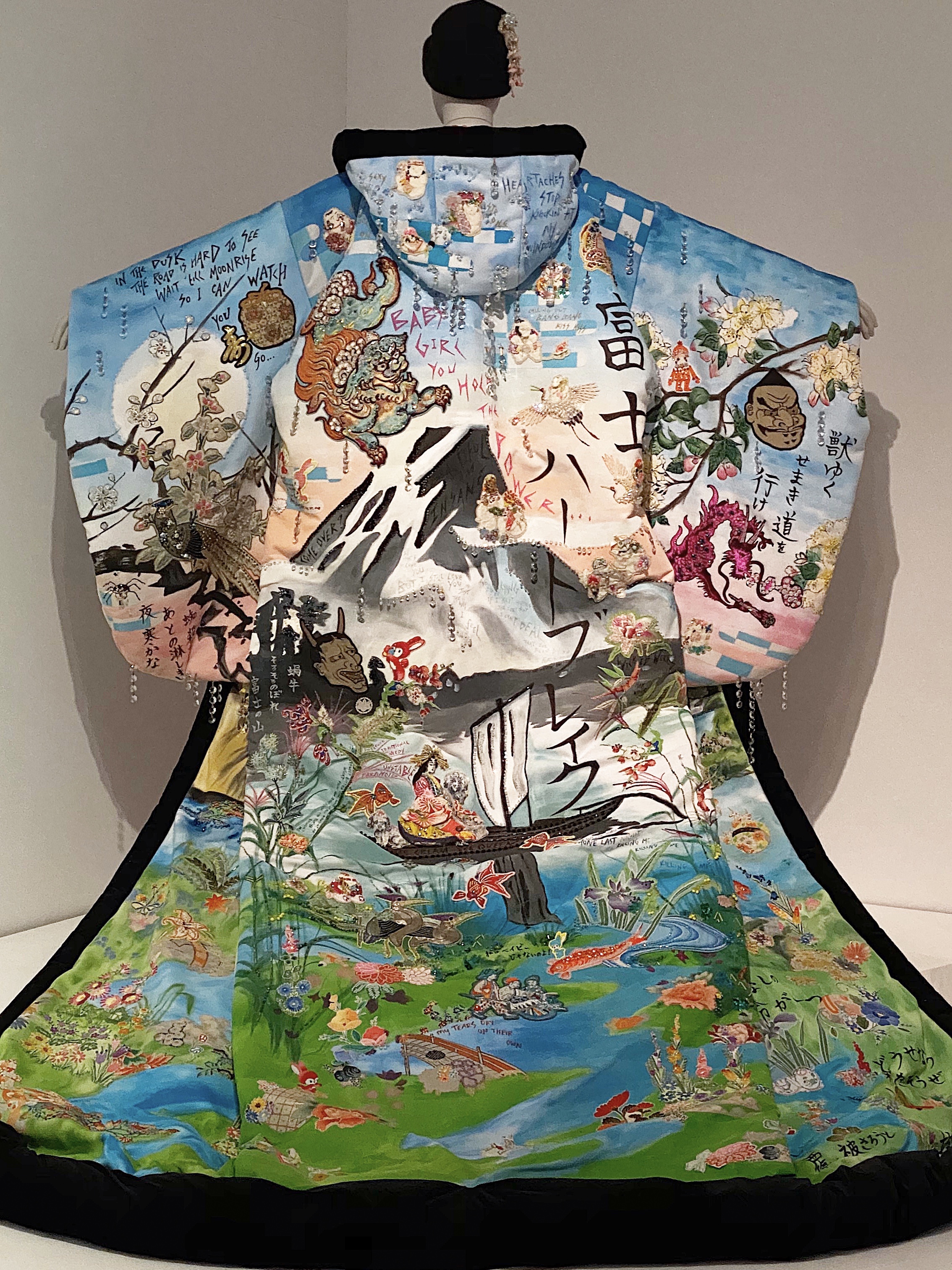