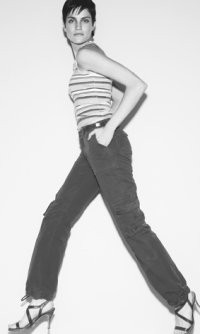 With casualization the most important trend of the last decade and apparently here to stay, casual sportswear has been adapting. It’s becoming sexier and more stylized. At the same time, there’s only limited evidence that more structured trends are returning, with the unemployment rate high and people job hunting.

The department store chain sees a big demand for utilitarian and cargo items, as well as denim, “ath-leisure,” sexy sweats and cashmere, Guion said, citing private labels INC and Charter Club as among the best-selling lines. “Casual fashion is for everybody,” she added.

Department stores represent 14 percent or $3.67 billion of the casual sportswear market, according to STS Market Research of Cambridge, Mass.

“They’re hanging Juicy, D&G, So Low and Illia Leisure with denim lines like Joie, Seven for All Mankind, and Paper, Denim & Cloth,” Moreno said. “But they have freshened the look with a strong cargo story — a must-have for spring. It feels like Bloomingdale’s believes in it, even as something with stand-alone potential.”

Moreno added that West Coast teens have been turning athletic looks upside down.

“Dressing up that active vibe and wearing high heels with it, that’s kind of a hip look,” she added. “It’s showing up in the clubs and it’s young and fresh.”

Sandy Richman, co-president of retail consultants Directives West, cited Macy’s West and Bloomingdale’s for having a handle on casual merchandise. Macy’s does the “status” contemporary especially well, while Bloomingdale’s is strong at better casual.

“It’s definitely the casual side of the business that continues to be the driving force in all zones of the apparel business,” Richman said.

As Kohl’s expanded, it became more astute about casual, though its stores nationally are heavily stocked with casual sportswear.

It took three years for Kohl’s to research Southern California’s lifestyle preferences before the Menomonee, Wisc.-based retailer placed 28 stores in the region with a broader assortment of street active and true activewear. President Kevin Mansell said Kohl’s has added 50 percent more activewear at West Coast stores and positioned the departments close to entrances, prominently displaying Nike cropped workout pants for $32 and Gloria Vanderbilt velour track suits ranging in price from hoodies at $12.99 to pants at $17.99.

In the mid-Atlantic region, casual is also uppermost on the minds of merchants, particularly when it comes to selling the blue-collar crowd.

“Casual is all about color and about light, lively, feel-good kinds of clothes,” said Thomas S. Crystal, senior vice president and general merchandise manager of ready-to-wear at Boscov’s, the $1.1 billion regional department store chain based in Reading, Pa.

He cited as key casual brands Erika, Rafaella, Liz Sport, Hilfiger, Polo and Caribbean Joe. As for trends for spring and summer, “We continue to see alternative length bottoms,” Crystal said, from flood pants to capris.

“We feel that skorts are very important for spring into summer and we are getting some early selling on miniskirts…in denim and twill,” he said, adding that key casual top trends are in prints, peasant looks and onion skins. “With bra tanks and tank tops in general, and the Hawaiian-feeling, we feel very bullish about that Tommy Bahama look.”

“Of all the categories, casual sportswear is one of the most difficult to define because it is such a broad range,” said Gerald Barnes, general merchandise manager of NM Direct, the catalog and e-tail branch of Neiman Marcus Group. “What one woman wears to go shopping or carpool is totally different from what another will wear. I was at a softball game with my daughter in 105-degree heat and one woman wore a Gucci belt and white designer jeans and a designer black-and-white striped top, while a lot of other people were more casual.”

About two-thirds of the category’s annual business is done in the spring, driven by linen, denim and cotton viscose blends in a variety of silhouettes, from pull-on pants to narrow capri’s with a cropped jacket, Barnes noted. Leading brands that account for 80 percent of the category’s revenue are David Dart, Democracy, Eileen Fisher, Joan Vass USA and private label.

Active-inspired looks are coming on strong at Neiman’s stores and catalog, led by sexy French terry sweats by Juicy Couture, he noted.

“The true warm-up suit business is just getting started, and whether that will extend to all age groups is yet to be seen,” Barnes said. “But this Juicy Couture stuff is so strong we may be headed in that direction, because if all the kids are wearing it, then everybody will want to look like that.”

Utility is the buzzword for casual sportswear this spring and fall, led by cargo pants and pants with novelty pockets and satin trims in corduroy, suede, denim and nondenim fabrics, according to Kathy Bradley Riley, divisional merchandise manager for sportswear at Doneger Group in New York.

“There is a big movement out of the contemporary market of more nondenim bottoms,” Bradley Riley said. “We have been in a denim cycle for quite a while and there is a different balance out there in contemporary with twill, cotton nylon and ripstop, so we see that as big within the casual market as well. All markets are attempting to be a little younger in attitude.”

At the Proffitt’s and McRae’s divisions of Saks Inc.’s Department Store Group, “comfort wear,” or “pseudo-athletic wear” is the hottest trend, according to Barb Schrantz, general merchandise manager over both divisions.

The knit-driven category, which includes two-piece hooded zippered jackets and drawstring pants in French Terry or more lightweight knits, is up 150 percent in sales over last year. Its private label Relativity represents around 70 percent of the casual weekend wear business.

The comfort category trend started third and fourth quarter 2002, and should last into fourth quarter of 2003, said Schrantz, at which point it could settle into a staple.

“Once consumers find something comfortable, they tend to stay with it,” she said.