From high-fashion goods to hand cream, getting noticed in Hollywood isn’t just for starlets anymore. 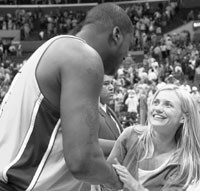 When Halle Berry wore an Elie Saab gown while accepting her Oscar, it was a well-known Cinderella story: Struggling, unknown designer catches the attention of a megawatt movie star, does whatever it takes to dress her and suddenly becomes the toast of the town — and a few dollars richer.

Be they global houses or fledgling local designers, making it now means making it in Hollywood.

The photo ops run the gamut from product placement on a hot TV show to a home-run hit on the red carpet, and hometown brands certainly benefit from the proximity to their targets.

The next best thing for those with headquarters faraway, of course, is local representation. Those who don’t have someone on staff at their Rodeo Drive flagship invariably hire one of the many boutique firms that have popped up in recent years to meet the need.

“In general, and especially during awards season, the eyes of the world are on Hollywood and celebrities,” said Marilyn Heston, whose company, MHA Media in Los Angeles, specializes in marketing luxury brands. MHA was responsible for making Jimmy Choo a red carpet staple, and for getting that gown on Berry at the 2002 Oscars. “It’s branding and exposure on many levels year-round, not just two months out of the year.”

But exposure doesn’t come cheap. Start-up companies looking for an introduction to Hollywood may choose to partner with an event marketer to get their product into a suite or VIP lounge at a single, multibrand event such as the Grammy Awards, spending $5,000 to participate on top of the cost of product giveaways and samples. Those who keep a local publicist on retainer can pay anywhere from $2,500 to $10,000 a month. On top of that, key events that happen year-round could mean another $20,000 for a lunch to woo stylists and the well-connected, or a party for 300 with open bar and entertainment for $150,000. Then there’s all that inventory to be loaned or given away as gifts.

The strategy can take many approaches: placing the product in editorial pages to ensure the “cool” factor; getting it in the hands of the right stylists, costume designers, publicists and celebrities, and doing whatever else it takes to get the word out to those in the know. Like mere mortals, many stars need to hear the buzz on something before they have to have it.

The formula has worked for products ranging from drugstore cosmetics to platinum bracelets. After all, the celebrity tabloids don’t discriminate in their pages as long as a star is attached. Even dressed-down photos generate as much heat as the glam pics. “You can see China Chow in Juicy and Ashley Judd in Armani at the same event, which has paved the way for designers who aren’t couture-level to get coverage,” said Lara Shriftman of Harrison & Shriftman, which does branding for L.A. brand Juicy Couture, as well as New York-based Delman and De Beers, among others.

But Shriftman warns that while the fashion biz clamors for Juicy’s cachet, “It didn’t just happen. That’s where the misconception is. We were getting feedback [from stylists] for years.” Shriftman’s firm also pioneered the multibrand suites and parties around products to raise awareness and get VIP photos placed in print. “I see people wanting to give away product all the time. But you won’t get anything from that unless you have a strategy,” she insisted.

Ted Byrnes of London Misher Public Relations, whose clients include Frankie B. jeans and Loree Rodkin jewelry, concurred. “We’ve all heard stories about jeans that are given away and end up nowhere.

To me, that’s not a real program. You have to be aggressively pitching day after day.”

But even the most well-planned campaign can strike out. “It’s pretty common. When products are marketed to too small a niche, it becomes a problem,” said Byrnes, who likened last year’s high-end Vertu cell phone launch to the doomed Bennifer movie “Gigli.”

And it’s all the more rare that a new product just happens to find its way onto an A-list star and get photographed in one fell swoop.

But that’s exactly what happened when Gwyneth Paltrow purchased a pair of Blue Cult jeans and wore them to a Calvin Klein fashion show last year. “That style immediately shot to our number-one seller and we renamed it ‘The Gwyneth,’” said Blue Cult’s public relations director, Melissa Rappaport. Incidentally, Rappaport wasn’t at the company then: Her position was subsequently created after the Paltrow sighting to manage the buzz.

Last spring, when the company introduced an updated Gwyneth style, Rappaport sent pairs to Halle Berry and Jennifer Lopez, who were both photographed in the jeans the week their relationships went bust. “That style was not moving for us until Halle got photographed in it,” she said. Now, she added, “My salesgirls thank me every day because it increases their business so much.”

Britt Johnson of Mediaplacement, which organizes celebrity awards show lounges and places products on “Friends” and “Will & Grace,” said that often, pulling out the celebrity photos is the best part of a sales pitch for clients trying to get picked up by retailers. “They save them until the end for that ‘wow’ factor. It helps get their products into stores from Target to Fred Segal. That’s more valuable than a picture in People magazine.”

Troy Nankin of the Century City-based publicity house BWR has reprimanded companies that link products to his clients without permission. But when launching Nyakio, his own beauty line, he had personal endorsements from his clients Selma Blair, Hilary Swank and Amber Valletta. “I knew I had an advantage going in. But I also knew that if my clients didn’t like it, they would say so,” he said.

Now, over a year after the launch, the line sold out at Fred Segal three times over Christmas. “Magazines are always saying so-and-so loves something when they’ve never even used it. My clients would rather support my product than someone’s they don’t know.”

The same can be said for celebrity stylists who launch their own lines. Tanya Tamburin, who designed costumes for Britney Spears, got plenty of ink when she launched her line Joey & T — particularly because she got the pop princess to attend her runway show during L.A. fashion week in April 2003.

And actress Joy Bryant, who once lived down the hall from up-and-coming L.A. designer Pegah Anvarian, acted as a kind of unofficial spokesmodel for her neighbor, wearing her cashmere tunics at Hollywood events and dropping Anvarian’s name whenever the press asked.

In fact, the Hollywood-fashion connection has bred a new hybrid, the well-connected liaison. She serves to literally bridge the gap between celebrities (and the social set) and the house she represents.

Still, Heston is surprised by how few New York- or European-based firms prioritize the Hollywood hookup. “They say they don’t have the dollars to hire in L.A., yet they want someone to wear their dress to the Oscars. It doesn’t make sense.”

For all the maneuvering, winning the game is far from an exact science. Observed Byrnes: “There’s only a couple of reasons things work. One is strategy and the other is luck. The good ideas usually involve both.”