With a renewed focus on boosting apparel exports, organizers look to lure international buyers to Aussie and Kiwi events.

By Patty Huntington on May 25, 2005
View Slideshow 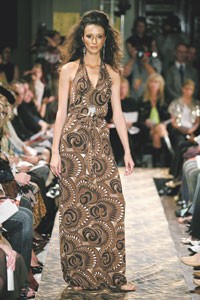 SYDNEY — They might be a more expensive place to shop nowadays for some, but Australian trade shows hope to lure record numbers of international visitors — with a little help in high places from the Australian and New Zealand governments.

The buying contingent included an additional 55 retailers from 14 markets that were hosted by the Australian government’s key export agency, Austrade, which came onboard this year for the first time in MAFW’s 10-year history. The cost of the exercise, according to Austrade, was roughly $114,000.

Although Federal Trade Minister Mark Vaile announced a mandate in 2001 to double Australia’s exports by 2006, the organization only recently started focusing on the apparel sector.

Given the export figures, some action was required. According to the Australian Bureau of Statistics, Australia’s exports totaled $93.3 billion in 2001, of which the textile, clothing and footwear component accounted for $82.3 billion. By the end of 2004, total merchandise exports had fallen to $89.6 billion, with TCF accounting for just $591.6 million.

“It’s something that Austrade has been putting a serious number of resources into over the last 12 months,” said Austrade’s new export advisor/fashion, Julianne Merriman. “The number of fashion clients alerted us to the fact that there were so many more out there.”

One of the key aims of Reed Exhibitions’ next Reed Gift Fairs in Brisbane, Melbourne and Sydney will be boosting the shows’ international attendance. Although the first two fairs — July 9-12 at the Brisbane Exhibition and Convention Centre and Aug. 6-10 at the Melbourne Exhibition and Convention Centre — remain largely unchanged, Reed hopes to lure 200 international buyers to the Sydney fair Sept. 24-27 at the Sydney Convention and Exhibition Centre, offering them a dedicated exhibition area with catering, communications and a matchmaker program to help facilitate appointments.

Why is Reed’s Sydney fair getting the special buyer treatment over its sister shows? Because as Fashion Exposed project manager Sue Dight discovered in February when her company, Australian Exhibitions & Conferences, moved the volume-focused fashion and apparel show to Sydney for the first time — and saw its international visitor numbers jump 47 percent — Sydney is a “gateway.”

Rebooking from February’s Sydney event is at 80 percent. The Melbourne show, to be held Sept. 4-6, expanded by 16 percent, to 226,000 square feet at the convention center. Dight also projected that international numbers could climb by 20 percent in September if the show receives assistance from Austrade.

Fashion Exposed’s high-end fashion component, Preview, continues to expand. Exhibitor numbers will increase by a third to 100 vendors, and Dight said her company is looking to eventually make Preview a separate trade event. For the Melbourne show, Dight is expecting 10,000 attendees, a 12 percent rise on attendance at the September 2004 event.

“We’re booming” said Dight. “We’re getting about five to six inquiries a day. We still have a waiting list in certain categories, such as accessories, shoes, handbags. The women’s wear section is already full.”

Touting itself as the largest Australian apparel trade show, the sourcing expo TCF International/IMPEX, which is staged by Australian Exhibition Services, takes place June 7-9 at the Melbourne Exhibition and Convention Centre and is scheduled to attract some 5,000 attendees and 250 to 300 exhibitors from 20 countries.

Poland will exhibit in Australia for the first time at IMPEX, with a 30-person delegation.

“Poland seems quite keen to get into some exchanges,” said exhibition manager Sharon Lethbridge. “Most European countries export to the U.S. and Europe, but I think because things have changed internationally, they don’t want to put all their eggs into one basket. They’re looking at Australia — and may use that as a distribution base back into Asia. People forget that we have a lot of experience networking into Asia, maybe more so than Europeans.”

New to the event this year will be a series of daily seminars on offshore sourcing opportunities, global supply chain management, business in China and free trade agreements, held in association with the Victorian Employers Chamber of Commerce and Industry.

Meanwhile trade relations between Australia and neighboring New Zealand were somewhat strained at May’s MAFW in Sydney, when a brouhaha erupted over Austrade’s alleged chaperoning of key buyers away from Kiwi designers.

Although Austrade has flatly denied the rumors, several of its key buyers missed two of the four New Zealand shows at MAFW, with three of the buyers attending an Austrade-organized Australian designer workshop held at the same time as Kiwi Kate Sylvester’s show.

New Zealand Trade and Enterprise said it was talking to MAFW organizers about ways to increase the profile of New Zealand designers at upcoming MAFW events. One initiative may be to sponsor more international buyers.

Another suggestion is to increase the synchronicity of the New Zealand and Australian autumn-winter showcases. Last year they ran back-to-back for the first time, with a handful of representatives from the U.S., Japan and Singapore attending both.

Three of the New Zealand labels that showed in Auckland last October — Zambesi, World and Sabatini White — showed again in Melbourne a week later. But given the boost in international buyers at MAFW’s May event in Sydney, industry sources speculated that some of the larger New Zealand labels might eschew Auckland this year in favor of Melbourne.

Not rising Kiwi fashion star Trelise Cooper. Cooper’s seven-year-old business now boasts a $10.7 million wholesale turnover. Significant growth is coming from the U.S. where, Cooper said, her business has grown from $250,000 to $2 million in six seasons. She shows her collections at two events: MAFW in May for spring-summer and ANZFW in October for fall-winter.

“I want to be part of ANZFW,” Cooper said. “Our winter show is just that little bit earlier [than MAFW]. And it means that those fabric-ordering balances can still be tweaked, whereas the show in Melbourne is still too late. By MAFW I’ve had everything ordered and being milled and under way.”