Black is back, and a constellation of design categories -- from perfume to furniture to restaurants -- is cast in its shadow.

By Katya Foreman and Laurent Folcher on July 28, 2006
View Slideshow 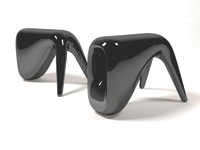 PARIS — Black is back, and a constellation of design categories — from perfume to furniture to restaurants — is cast in its shadow.

The success of Apple’s black iPod nano, for example, introduced in September 2005, prompted the launch of the brand’s first black MacBook in June. Black walls provide the backdrop for “Artist’s Choice: Herzog & de Meuron, Perception Restrained,” which runs through Sept. 25 at the Museum of Modern Art in New York. Swiss architects Jacques Herzog and Pierre de Meuron darkened the gallery with dim lights, painted the walls midnight and adorned them with pieces from the permanent collection. And late last month L’Oréal USA unveiled the men’s fragrance Polo Double Black, the latest installment in its series of Polo fragrances.

The rising popularity of the darkest color also prompted a black design-theme auction at Paris’ Hotel Dassault earlier this summer. A total of 261 black pieces — black art, photography, jewelry, and, especially, furniture dating to 1900 — went under the hammer.

“One of the prize pieces is an extremely rare prototype of Martin Szekely’s Eighties’ masterpiece, the ‘Carbon Chair,'” said Fabien Naudan, the auction’s design curator, who spent months coaxing designers to release often unseen black pieces from their ateliers.

As a result, a number of rare prototypes were featured in the sale, including items by designer Marcel Wanders and French industrial designer Cedric Ragot. “I came across one extraordinary black stool, called ‘La Chose’ (The Thing) by Ragot, who I hadn’t even realized was working in black,” Naudan said. “It looks like a black animal that’s about to spring into life.”

Black is even seeping into interior design. “I start a lot of projects with a black box — it’s my blank page,” said runway production wizard Alexandre de Betak, who channeled his dark thoughts into the interior design of Black Calavados, the black-theme Parisian nightspot that opened last March. Betak said he chose the color to bring warmth to the venue.

“By incorporating low-intensity lightbulbs, the black walls swallow up the light, leaving only the filament, which gives an almost candle-like effect,” he said, characterizing black’s comeback as a reaction to the minimalist Nineties, when open white spaces were the rage.

“The Nineties killed white in favor of many things — and black is one of them,” he said, adding that what was once considered a taboo tint is now making its way into people’s homes.

Hans, however, doesn’t see herself a “black designer,” as such, but refers to her pieces as happy accidents of the treacherously accurate black porcelain procedure.

“It is extremely difficult to control the shape of an object when working with black pigment in a kiln,” Hans explained. “That’s why my porcelain always looks so wobbly; I’m making fun of the black world of perfection.”

She’s not the only designer to make a business out of black rejects. In 2003, Philippe Starck reignited Baccarat’s black crystal line, first launched in 1844, with the debut of his “Starck Darkside by Baccarat” collection featuring a box of five black crystal Harcourt glasses.

Christened “Un Parfait” (Perfect One), the set contains one perfect glass as well as the four imperfect ones that it took to achieve it. Until then, their destiny had been the garbage can.