Making Sense of 21st-century Fashion? Not So Fast… 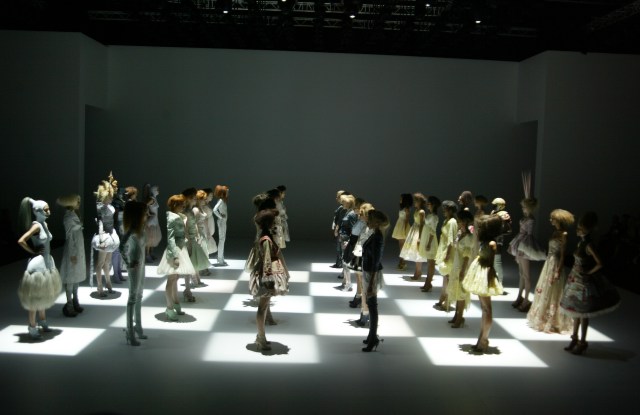 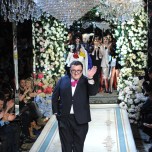 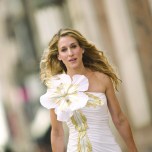 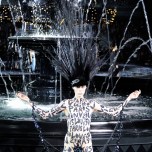 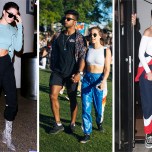 The year 2000 and the great anticipation — and anxiety — that came with the countdown to it was almost two decades ago. Much has changed in the 17 years since the new millennium, including from a fashion perspective, but not so drastically that identifying a look of the post-2000 era is easy. Spacesuits and aerodynamically designed clothes did not immediately catch on as futurists of yore imagined, though ath-leisure certainly did. The defining aesthetic of the Aughts and the years after is rather elusive when you think about it. Unlike Fifties fit-and-flare, Sixties Swing, Seventies sensual freedom, Eighties poufy excess and Nineties street and minimalism, there is no single stylistic sign of the times, but more of a collection of moments and trend frenzies that have hit hard, then faded, and in some cases come back again. Where to begin?

It so happened that a culture-shifting fashion occurrence presented itself rather early on in 2000, specifically on Feb. 23, the night of the Grammys when Jennifer Lopez wore a green palm-printed Versace dress with a neckline that plunged past her belly button and into history. It was a significant, defining moment not because throngs of women ran out and bought green, naval-bearing dresses and fashion tape, (although many probably did) but because the whole world wanted to see J. Lo in that dress. It drove search queries on Google to a then-unprecedented level, so much so that Eric Schmidt of Google later explained that Lopez in Versace at the Grammys was the direct impetus for Google Images.

“That moment of Jennifer Lopez in that green Versace dress was a true unlock and a true turning point in what was a very insular industry,” says Andrea Lieberman, the former stylist who put Lopez in the dress, and now has her own contemporary collection A.L.C. “All of a sudden the fashion houses really understood the relationship between fashion, celebrity and entertainment. Everything shifted and after that, fashion became entertainment.”

Around the same time, another major style lightning rod, love it or hate it, was delivered via the nexus of fashion and candy-colored, velour-covered celebrity tushes — the Juicy Couture tracksuit. “It was just incredible synchronicity when the world was ready for that kind of dressed-down/dressed-up look, which was a very L.A. look at the time,” says Gela Nash-Taylor, who, along with her Juicy Couture cofounder Pamela Skaist-Levy, is responsible for the early aughts terry tracksuit trend. “We kind of invented a little bit of that L.A. look because of the car culture. You can wear any kind of shoes you want, and people just wore track pants with little Chanel jackets and kitten heels to Mr. Chow’s. Every celebrity was mixing and matching each other’s names on tracksuits and going to Laker games in it. It was kind of crazy.”

One of the reasons the suits took off the way they did was that Juicy was early to the celebrity gifting game. Skaist-Levy and Nash-Taylor’s publicist at the time had the idea to do a celebrity suite at Chateau Marmont, where tracksuits were given out with matching manicures and pedicures. “That was before there was all of that celebrity product placement,” said Skaist-Levy. “Because we were based in L.A., we had people coming to us that were styling movies and shows. Everybody was here.” In 2003, Skaist-Levy and Nash-Taylor sold Juicy Couture to Liz Claiborne for $53.1 million.

Meanwhile, in New York by way of Hollywood and HBO, a single thirtysomething woman who managed to survive in Manhattan on a freelance writer’s salary despite a hopeless addiction to designer shoes, bad puns and the wrong men, was fueling a fashion and shopping phenomenon that still reverberates more than a decade after the last episode of “Sex and the City” aired in 2004. The personal style of Carrie Bradshaw, the series’ protagonist and fashion plate, was a collaborative effort between Sarah Jessica Parker and the stylist Patricia Field, who explains the unique aesthetic they created as the ultimate mash-up.

“We put together unexpected things, whether a T-shirt with pearls or the high-low,” she says, finding the words for what may well be the defining style characteristic of 21st-century fashion. “People responded to that idea as it unleashed a new way of gals approaching fashion. Before that, there were uniforms for this and uniforms for that. The women wore suits, for example. We broke away from that whole idea. I wasn’t feeling it and couldn’t really be that creative in it. All the mix-and-match, people got it.”

Ask Stefani Greenfield who founded Scoop NYC, the multibrand retail chain with the tagline “the ultimate closet” that defined a certain gleeful, social shopping experience of the early millennium. “That was so much about the times,” she says. “Think about it, back then the breakthrough was mixing a designer and J. Crew. We had permission at Scoop to sell Alaïa and Stella McCartney with Adidas pants and Seven jeans, because for us it was all about your personal style. It was right at that moment when celebrity culture was starting to explode…‘Sex and the City’ in its day was huge for us, because Carrie would wear a tank top with a flower on it and it could become the new uniform.”

Greenfield described Scoop as “a commodity business.” She bought deep into items, such as Seven For All Mankind jeans; flirty, going-out tops; DVF wrap dresses, which Scoop helped revive. The store’s own reusable plastic shopping bag became a covetable item and genius marketing ploy in its own right. And, of course, there was the Juicy Couture tracksuit. “That was my first $1 million order,” said Greenfield.

While Scoop and Carrie Bradshaw opened women’s eyes to the idea of kooky, mix-it-up styling that had previously belonged in the pages of magazine editorials, Simon Doonan, creative ambassador of Barneys New York, sees another major impact of “Sex and the City.”

“It sort of legitimized that idea of designer fashion indulgence,” he says. “Shopping and obsessing about shoes was no longer just a superficial thing. It was that idea that shopping is a legit pastime, it’s creative, it’s fun. Even a brainy girl like Carrie could be obsessed with her shoes. It didn’t negate her other side. That was a new thing.”

Suddenly Manolo Blahnik, Jimmy Choo and Christian Louboutin and his slick red-soled stilettos were household names at $400 a pair, a price tag that seems quaint by today’s tariffs. For every pair of “It” shoes, there was an “It” bag — the Fendi Baguette, the Balenciaga Lariat, the Chloe Paddington. For spring 2003, Marc Jacobs literally reinvented the art of the handbag, enlisting Takashi Murakami for a Louis Vuitton accessories collaboration, the first of many artist hook-ups for the luxury brand.

Shoe and bag obsessions drove the designer accessories business, which in turn, drove fashion businesses overall. Saks expanded the shoe department of its Fifth Avenue flagship to have its own zip code and Doonan recalls that Barneys revamped its floor plan so that handbags took over the beauty department’s traditional space on the department store’s ground floor.

Fashion lovers who couldn’t afford Barneys were no longer the have-nots. High-low took a more concrete form in 2004 when Karl Lagerfeld became the first luxury designer to collaborate with fast-fashion behemoth H&M, which, it stands to note, opened its first stores in the U.S. in 2000. From there, collaborations with everyone from Stella McCartney to Comme des Garçons to Alber Elbaz to Versace ensued, triggering gleeful and sometimes aggressive shopping frenzies.

It marked a new level of access to the rarified world of designer luxury, which only snowballed to seismic proportions as the digital age progressed. There’s been more than a little retail road kill along the information highway. Scoop closed its doors in 2016. “On my tombstone it’s going to say, ‘Loving wife, loving mother, founder of Scoop, add to cart,’ because I buy everything online now,” says Greenfield.

It used to be that you had to be part of the working fashion elite — the editors, the buyers, the clients — to see the best of the best on the runways. In the new millennium, that would be the work of Nicolas Ghesquière at Balenciaga, Alexander McQueen at the height of his creativity, Jacobs at Vuitton and his own collection, Riccardo Tisci at Givenchy, Elbaz at Lanvin, Phoebe Philo at Céline, Pierpaolo Piccioli and Maria Grazia Chiuri at Valentino. But the Internet and iPhones changed all that.

“Now, anyone with Wi-Fi can watch the Valentino couture show as it’s happening and have a better view of it than I do,” says Mickey Boardman, Paper Magazine’s editorial director. “I’ve met kids on every social media platform — Facebook, Twitter, Instagram — who, whether they’re in the middle of Kansas or the middle of Serbia, can look at a picture of Sarah Jessica Parker from 2004 and say, ‘Oh, that was McQueen fall 2004.’”

That doesn’t mean they’re wearing McQueen. The all-access pass and democratization that’s been digitally granted the planet over hasn’t translated to mass influence for a single designer. There have been small moves of the needle, such as the proliferation of Philo and Piccioli and Chiuri’s modest silhouettes, Hedi Slimane for Saint Laurent’s glam-grunge tornado, Alexander Wang’s model-off-duty and Demna Gvasalia’s hand in the ironic streetwear frenzy, but it feels incorrect to say that Jacobs or Lagerfeld, or any one designer, no matter how brilliant, how influential, has changed the way the world dresses.

The convergence of fashion, celebrity and digital life has bred brand and image obsession. Look at the rise and ubiquity of personality-based brands such as Tory Burch and Michael Kors, whose stint on “Project Runway” bore out a blockbuster IPO that became a unicorn of the fashion business. A handful of celebrities have crossed over into fashion legitimacy, including Victoria Beckham and Ashley Olsen and Mary-Kate Olsen. Kanye West, through his music/streetwear/Adidas tie-ups, has made a mark. With him comes a nice segue to the entrepreneurial phenomena with enough tentacles to cover just about ever money-making segment of the fashion/beauty/retail/branding/digital pie: the Kardashians.

Indeed, Kim Kardashian and her sisters, through their unyielding media — social and editorial — presence and reciprocated interest in the fashion world have moved millions of women to embrace their taste for sexy, body-skimming clothes and athleisure, as well as their predilections for ever-altered, curvy silhouettes and contour-driven cosmetics. But, again, for every photo of a Kardashian floating around the Internet waiting to inspire someone’s fashion or beauty choice, there’s a million more of something else to dilute the style ether.

“It’s everywhere, it’s all over the map right now,” says Field when asked what 21st-century fashion thus far will be remembered for. “I don’t think there’s a leading look other than sports gear and yogawear, and that’s part of all over the map.”

It goes high to low, and increasingly low to high. See the Supreme/Louis Vuitton collaboration of earlier this year, and Alessandro Michele’s Gucci, the fashion brand that’s coming closest to world domination at this point. His vision has been filed under glam, eccentric granny-chic, but from a what’s-selling standpoint, it’s commodities: loafers, logo Ts and sweatshirts, gilded tracksuits.

“Pam and I always say Gucci is the Juicy of today,” says Nash-Taylor. “It’s a candy store.  It’s like the big crazy diamond ring key chains we had — Gucci has the same kind of fun, wacky accessories. And right now, everything is back to track suits! Every designer does sweatshirts and tracksuits and track pants. Tom Ford is doing track now. Roberto Cavalli is doing track now, and the homage Vetements did to the Juicy tracksuits that we went crazy over was just brilliant. So it comes full circle.”

Who knows, maybe a Vetements x Versace green dress collaboration is next.