As the final countdown of what will make it down the runways gets under way, WWD asked a crop of top designers to share their collections’ overall mood. 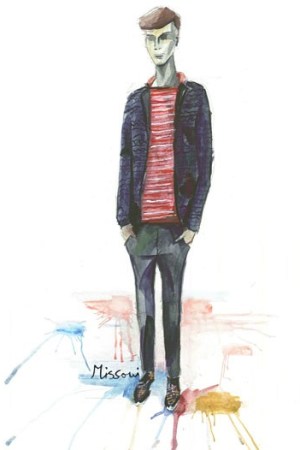 MILAN — As the final countdown of what will make it down the runways gets under way, WWD asked a crop of top designers and brands to share the season’s must-have look or their collections’ overall mood. New printing or knitting techniques; navy blue pleated trousers; contrasting elements and reinventing the classics have emerged as highlights heading into the Milan men’s shows that kick off Saturday. But since all work and no play make for a dull fashion pack, designers also suggested their favorite, off-the-beaten-track spots, from cozy watering holes to edgy shops.

MISSONI
Angela Missoni
The anchor piece: A moss stitch knitted suit with a blazer that features a multistitch jacquard panel.

Soundtrack: The show will be set in an old raw foundry that used to make church bells, so the music is based around celebratory events with an energetic and classical twist.

GIORGIO ARMANI
Giorgio Armani: “For the upcoming spring collection, I have developed a new concept of the print with a pearlized and luminous effect. The print used on the both shirts and pants creates an interesting visual effect that elongates the figure. The silhouette is defined by a formal contrasting jacket, soft and fluid, and with lapels that set off the proportions.”

EMPORIO ARMANI
Giorgio Armani: “The taste of modernity becomes an expression of extreme lightness obtained with a mix of fluid and deconstructed shapes and the layering of fabrics in different weights. The suit takes center stage, renovated in its proportions and with tapered pants featuring a double pleat.”

ROBERTO CAVALLI
Roberto Cavalli: “The inspiration is that ideal place that I call the Riviera: sea, happiness, a carefree attitude, color and freshness. A place where different cultures meet, a mix that inspired my collection. It’s thought that a gentleman with strong values attracts women with his innate elegance and character, not with his clothes, which are only an expression of his character. The Italian tailoring side is enriched with colors, embroideries and exotic details. California-style leather biker jackets are made by Florentine artisans and paired with colorful printed and embroidered jeans.”

BRIONI
Gianluigi Di Nino, director of men’s wear: The anchor piece — the Piuma, or feather jacket — is the lightest style ever made by Brioni’s master tailors. “The Brioni man wants to always be impeccable, consciously elegant. His starting point is classic attire and the jacket an ideal ally that becomes very light and ready to be a new icon. Totally unlined, with silk-covered stitching, it’s completely deconstructed. This construction is obtained with two different type of fabrics: a silk-linen blend that weighs less than 200 grams per meter and a linen-silk-wool blend that is both fresh and bright.”

Cool hot spot: The new Conti Bar & Restaurant in Via Montenapoleone. Conti is a Milanese “confetti” maker and shop.

Cool hot spot: The Pasticceria Sissi, a bakery and cafe with a small garden in Piazza Risorgimento.

Soundtrack: “We usually decide the music at the last minute, but we have been listening to The Baseballs and their covers of Lady Gaga and Rihanna.”

ETRO
Kean Etro
The anchor piece: The new navy blazer with knitwear pockets and lapels. Each one comes with a fabric flower in the buttonhole.

ERMENEGILDO ZEGNA
Anna Zegna
An important theme is certainly the “jacket-set,” a combination of one piece of outerwear and a jacket in the same material that is best represented by a three-button duster and jacket in micro silk worn over linen slim fit pants. Fabric contrasts and colorblockings are also key elements.

Cool hot spot: Bacaro del Sambuco, a small cafe-restaurant with few tables that opened a few month ago in a courtyard on Via Montenapoleone. It’s a lovely place for breakfast, light lunch or an afternoon tea.

Z ZEGNA
Alessandro Sartori
The anchor pieces: A shirt-weight blouson jacket in glazed silk, a boat-neck T-shirt and a derby shoe in either cotton, leather or silk.

Cool hot spots: The Wait and See shop in Via Santa Marta that opened four or five months ago and a restaurant called Giacomo Arengario in Piazza del Duomo.