This lineup of gowns, cut in the same shiny fabrics as his suits, exhibited touches of Eighties drama. 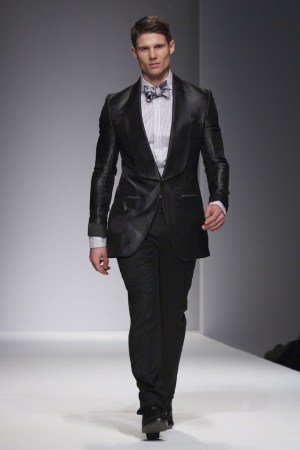 Malan Breton is becoming known for his colorful silk men’s suits (he once worked at Turnbull & Asser), but he also trained under Arnold Scaasi. Thus, this lineup of gowns, cut in the same shiny fabrics as his suits, exhibited touches of Eighties drama. It’s his pants and jackets that are his strong suit for both ladies and gents: for him, a slim multicolor floral jacquard suit with cropped pants; for her, a white sateen tuxedo jacket with red satin trousers.