When the Limited Brands launches a new retail concept, it usually chooses Easton Town Center for its first location. 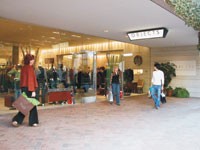 NEW YORK — When the Limited Brands launches a new retail concept, it usually chooses Easton Town Center for its first location. That’s because the mall, in Columbus, Ohio, is close enough to Limited Brands’ headquarters for chief executive officer Leslie Wexner to drive over and check its progress.

The Limited can roll out stores just about anywhere, but smaller entrepreneurs and start-up retailers need more attention. When it comes to new concepts, certain malls are more prepared than others to nurture stores along, especially those centers that seek out local and regional retailers that may not have the mind-set or the financial wherewithal to ramp up a business.

“It requires patience to work with these entrepreneurs,” said Tracy Gotsis, senior vice president of marketing for the Macerich Co., which operates the Biltmore Fashion Park, in Phoenix, among other properties.

But all the work is worth the effort, said Gotsis. “Local retailers are hitting the mark and able to customize their buys to the market,” she said. “We have a person who specializes in going out and working with local retailers and educating them about shopping centers.”

Macerich offers newbies temporary lease agreements, which allows them to give the shopping center business a try. “As they’re able to build their shopping center base, we begin to talk to them about permanent deals,” said Gotsis, adding that deals with smaller players are “based on different financial structures.”

Amy Inc., said Gotsis, “picks up on designers that work really well in Arizona, such as Ivan Grundle.” At Haus, a contemporary home design store that carries eccentric furniture and accessories, Jonathan Adler is a top seller.

“Mom-and-pop shops are interesting,” Gotsis. “Consumers are tired of seeing the same thing in every department and specialty store.”

“The center is open-air, so people can spend more time,” he said. “Our amenities include a big grass area with movies in the park, a herb garden where people can have a cup of coffee, and a fire pit outside of Starbucks. There’s also a kids’ area with jungle gyms.

“Lenders generally like to see national tenants in projects,” Himmelman said. But a certain number of unique tenants make a center interesting, he added.

Zoomie’s, a Seattle-based youth-oriented store for snowboard enthusiasts, and Thomas Station, for aficionados of Thomas the Tank Engine, are among the   novel names at Victoria Gardens. There’s also ISSI, a fashion retailer that has a store at the Beverly Center in Los Angeles, and Jaloux Jaloux, a purveyor of junior fashions, which opens in March.

“Girl Mania has some legs,” said Himmelman, indicating that the chain for girls 4 to 14 years old has potential.

“The Limited and Gap at one time were mom-and-pop concepts,” he said. “You always need to be on the lookout for unique, niche retailers. It’s much more difficult today. If you find them and nurture them and incubate them, they can become very good regional retailers and even national retailers.

“Most of the national retailers that are doing well either have a new concept or are contemplating a new concept or have one in design,” said Michaels, who is most impressed with Ruehl. “Their [Abercrombie & Fitch’s] Hollister chain has done fabulously. That filled a void in the market. Ruehl will be more selective. Ruehl can have 150 stores, at most.”

He’s also bullish about Soma’s lingerie concept from Chico’s. “Victoria’s Secret has had this business all to themselves forever,” Michaels said. “It’s too early to tell whether the customer that thinks Victoria’s Secret is a little edgy will go to Soma as opposed to department stores. We’re doing a lot of business with them.”

Michaels expects to do more deals with MetroPark, a store from the founder of Hot Topic. “They have 10 or 12 stores open so far,” he said. “It’s a fun store and much more interactive than most.”

In addition, Michaels expects C.O. Bigelow stores, another concept from Limited, to open in General Growth centers. “We think it’s going to be successful based, on what’s happened at Easton Town Center,” he said. “The new Bath & Body Works will be a tremendous success, based on what we’ve seen in the renderings.”

When it comes to new retail concepts, national retailers often work on the herd mentality: Identify an underserved target audience and you’ll soon have company. That happened when the teen craze reached its apotheosis three years ago and chains such as Wet Seal, Forever 21, Hot Topic, PacSun Rampage and Hollister rushed to expand.

At the time, Marshal Cohen, chief industry analyst at The NPD Group, said that overall, the large number of chains catering to the teen market was staggering compared with the scant few that serve a mature customer.

Today, the mature customer is feeling neglected no more. In addition to Ruehl, American Eagle Outfitter’s Martin + Osa and Gap’s Forth and Towne have sprung up to offer women in their 20s through 40s more sophisticated styles than low-rise jeans and belly shirts.

“They’re jumping to this market because of the success they see in that age group,” Michaels said. “If you look at demographic studies, that is where the highest apparel spending is. It all started from Chico’s success. People looked at it and said, ‘How did we miss this age group?’ Besides, the teen category is, if not full, getting full.”

Michaels would have expected more innovation, however, from department stores, he said. “Whether it’s Federated or J.C. Penney, I would think you would see some new ideas from them and you don’t. We’ve talked to Federated about Bloomingdale’s SoHo. It’s a great concept that could fit into a number of markets. They want to keep testing it. The good thing about retail is, it’s always changing.”