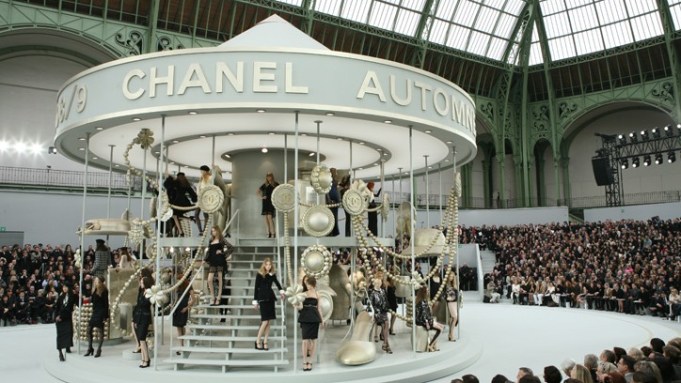 Karl Lagerfeld enters his futuristic new apartment on the Quai Voltaire—which resembles the command deck of some ultraluxurious spacecraft—and flicks a switch. Suddenly, the milky glass walls lining his vast living room/study splinter into panels that swivel open to reveal bookshelves, the motorized system emitting a high-pitched whir redolent of a Formula One race.

The sound effect is apt for the on-the-go life of Lagerfeld: a dizzying whirl of collections, fashion shows, editorial and advertising photography, exhibitions and book publishing. And yet the man still finds time to send countless handwritten notes and faxes, stay up to date on news and gossip, shop for the latest Japanese men’s wear (N.Hoolywood being his latest find) and run his own bookshop—seemingly knowing every word and image in each title it stocks.

“I hate leisure,” the designer hisses gleefully from behind his mirrored Michalsky wraparound sunglasses, “except reading. I’m really a person made to work, if sketching is considered work. I’m pretty lucky to be doing what I’m doing in beyond-perfect conditions.” Lagerfeld also counts himself lucky for having robust health and a disposition—merciless though it may seem—that drives him to forever ask, “What’s next?”

The answer, as always, is plenty. While scores of designers make a beeline for the beach or a spa to collapse and recharge after the grueling pace of fashion weeks, Lagerfeld keeps zooming, locked in high gear. After presenting widely praised fall collections for Fendi (24-karat gold fur skirts), Chanel (pared-down French chic) and Karl Lagerfeld (terrific tailoring), plus hosting a Fendi store opening and Amy Winehouse concert, he was heading to Hong Kong to celebrate the otherworldly Zaha Hadid pavilion he commissioned for Chanel’s ambitious “Mobile Art” project. After that, he was off to New York to lens campaigns for Chanel, Karl Lagerfeld and Fendi ready-to-wear and perfume; to Miami to present Chanel’s cruise collection poolside at the Raleigh hotel, and to Lille, London and Versailles for a trio of photo exhibitions. Not to mention the catalogue-cum–fashion magazine he concocted to showcase Chanel’s pre-fall collection, for which he shot the fashion pages and even the fake ads.

Lagerfeld’s chockablock schedule is a mystery, even to him, though his chronic lateness attests to its utter intensity. “I’m very much a last-minute person,” he says. In fact, he does not like much advance notice on what tasks await him. “I hate to cut my time into pieces,” he says. “I’m not selling my free time, and in any case, I have nothing to sell.”

Given his whirlwind of projects, Lagerfeld’s arresting carousel set for Chanel’s show at the Grand Palais was a witty commentary on both his nonstop life and the fashion world’s relentless pace. It served another purpose, too. The 10-ton structure, which took five weeks to sculpt, was a way for Lagerfeld to pare down his Chanel catwalk, putting the quilted bags, camellias, pearls, bows and hats on his merry-go-round instead of on the models. That put the focus on his long and lean suits, cozy knits, frothed-up miniskirts and low-key evening looks. “I was tired of too much stuff on the girls,” he says in his mile-a-minute parlance. “I wanted to clean up my act a little bit.”

That Lagerfeld dreams up the spectacular sets for all his fashion shows—a towering circular staircase one season, a giant Chanel jacket the next—is testimony to not only his fecund imagination, but to the outsize, anything-is-possible scale of his thinking. And he credits the Wertheimers, who own Chanel, for daring to dream big and invest big.

“When you make a movie, you have to build a set,” he says with a shrug. “This show is shown all over the world. I think [the set] frames a collection in a way. Sometimes you might want to see fashion in a better way in a room with 100 people. But today, you invite 100 people and you make 3,000 enemies.”

For all his obvious talents, Lagerfeld is not a numbers person. He says he has no idea how much the shows and events he envisions cost. Just to install the carousel and the platform on which it stood in the Grand Palais took nine days. The setup necessitated an underground passage to ferry a prostrate Lagerfeld on a wheeled trolley from backstage to underneath the center of the merry-go-round, from which he emerged triumphantly in a wide-shouldered suit by Martin Margiela. “It was like working in a mine in the 19th century,” Lagerfeld says. “I loved it.”

Yet Lagerfeld has no doubts that his incredible bespoke sets bring an avalanche of publicity in return. He notes, for example, that the carousel immediately won Chanel double-page spreads in two major German news magazines, Bunte and Focus, to name a few.

It’s a fair guess that plenty of front-row guests jettison, or ignore, the pack of press photographs Lagerfeld places on the seats at each of his shows for Chanel and Karl Lagerfeld. Not so the editors from far afield, who might not have the budgets to hire top models and photographers or stand a chance of borrowing a Chanel garment. Lagerfeld goes that extra mile, winning recognition for the French brand. “I must tell you, it’s very important to do it yourself,” he says. Likewise for all the photography work he does for fashion magazines: “It is interesting to stay in touch with the fashion world.”

Asked if he ever feels like he’s drowning in work, Lagerfeld replies without missing a beat: “I know how to swim and to dive. I don’t even have the feeling like I’m overstretched. For me, it’s like breathing, as long as it’s fresh.”

It was restlessness that drove Lagerfeld to introduce the Métiers d’Art collection for Chanel: a range of luxurious pre-fall rtw made with the savoir faire of the couture ateliers Chanel owns, among them the embroiderer Lesage, the shoemaker Massaro, the feather artisan Lemarié and the silversmith Goossens.

Lagerfeld, who always has a thick sketch pad at the ready, picks up a pen and maps out all the collections he does for Chanel, including couture and pre-collections, and jabs his pen accusingly at the gap between October and January. What started as a low-key—albeit star-studded—show at Chanel’s Rue Cambon ateliers has morphed into one of Lagerfeld’s roving fashion spectacles.

Last year’s blowout in London, which included a fleet of double-C logoed taxis to ferry guests between a number of glitzy events, will be followed up in December by a show in Moscow. In Lagerfeld’s mind, it’s essential to feed a global brand with fresh fashions every month or so. “Temptation has to be permanent,” he says, flashing a big smile.

Lagerfeld is not prone to self-reflection, but muses on his uncanny ability to juggle such a workload. “I have very little social life. I can do without a social life. At the same time, I cannot cross a street alone,” he says. “Fashion and the way it is now, it’s like the life of an athlete. It’s OK with me, I’m used to it. Appetite comes from eating.”

One time-saver for Lagerfeld is that he doesn’t have a proper office and he never, ever does meetings. He confesses he’s not even sure where to find the offices of key executives at Chanel, like Bruno Pavlovsky, president of fashion. If he or Alain Wertheimer need to discuss something with Lagerfeld, they come see him in the studio.

And when he sets down his pen, his camera and his books, he sleeps seven hours a night without waking. “It’s the payback of a healthy life,” he says. “Collections, books and photos—that’s what I’m interested in most.”

The one thing he fights to find time for is illustrations. “I love to do illustrations. I have several book projects, but I have no time to do them.”

Not that he’s complaining. “I’m open to everything. When you start to criticize the times you live in, your time is over,” he says. “The most important thing in fashion is lucidity, if you want to last.”