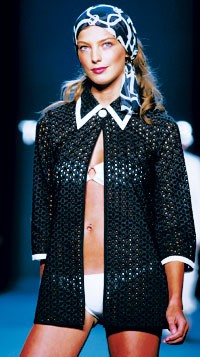 Proenza Schouler: Tough-chic girl, take a hike. Spring’s fetchingly proper young lady is muscling in on your turf — oh-so-politely, of course. After a fall of gloomy angst, Jack McCollough and Lazaro Hernandez decided to embrace a “new conservatism.” In so doing, they went back to their roots, if such an expression can apply to a pair so young. Either way, these two quite talented neophytes started out with a belief in grown-up dressing for ladies with just a hint of attitude. Having tinkered about with other motifs as every good designer — young, old or in between — should do on occasion, for spring they revisited that approach, with greater confidence and a more highly developed point of view.

Yes, the clothes they showed were ladylike and chic. And some vaguely retro cuts in coats and jackets displayed a surface conservatism. But if, back when, a sleek turban was the mark of matronly haughtiness, it had a different effect here, as did the stiff corded silks splashed with giant palm fronds. While these nodded at the Glorious Guinness set (and the tropical beach prints, toward Prada), they beckoned the young and hip with a hearty ring. And what’s so old-school about ultraconstructed, sequin-encrusted corset dresses and bustiers less suited to a prim deb’s night out than to a high-glam super heroine done up in her evening finest?

Throughout, McCollough and Hernandez concocted plenty of alluring combinations, many involving deft masculine/feminine counterpoint — gilded sequined tank over boy’s Bermudas, anyone? At other times, they let a girl be all girl — and a good girl, at that. Case in point: the divine finale of sheer, printed chiffon gowns worn over bodysuits, so that a girl’s inner lady and vamp might revel happily together in the joys of nightlife.

H Hilfiger: Hello, sailor! In his return to the runway after a brief hiatus, Tommy Hilfiger had some deft juggling to do. His megafashion success clearly has not obliterated whatever adolescent rock star fantasies Hilfiger may have had as an upstate Elmira, N.Y., youth, because no one works the fashion-rock connection more shamelessly — or more gleefully — than he, whether that means sponsoring the tours of major artists from the Rolling Stones to Britney Spears, endowing the Tommy Hilfiger at Jones Beach Theater, enlisting the David Bowies as his poster couple or filling his front row with the hottest names of the moment. But when he has taken that synergy to the runway, Hilfiger has been known to flop. (Remember those python pants?) Not this time, since, in the H Hilfiger collection the designer showed on Thursday night, he confined the musical imagery to his front row, in the presence of a glittering array of stars including, among others, Sean “P. Diddy” Combs, Jennifer Lopez, Janet Jackson, Lil’ Kim, The Black Eyed Peas and Ludacris.

On the runway, Hilfiger opted for a leisurely sailing motif, inspired by a summer yachting trip with friends and family — a wise starting port, especially since the theme’s unfettered cleanliness offered the potential of pleasant respite from fashion’s current preoccupation with embellishment. Hilfiger started strong, with a floor-length stretch of navy-and-white stripes worn by Naomi Campbell, who has never looked more gorgeous. He went on through snappy sweaters; billowing, bold-printed cotton skirts; crisp shirt variations, and a delightful Gidget Goes Sexy bikini in turquoise terry cloth trimmed in white. Seafaring references came in the form of peacoats, sailor pants and a natty knot print. Too often, however, Hilfiger’s tailoring felt dated, and he sometimes drifted far afloat into the waters of H.M.S. Lauren. Nevertheless, when he managed to avoid such pitfalls, it all made for a smooth, enjoyable sail.

Vera Wang: Vera Wang’s Friday morning message couldn’t have been taken any other way. By opening her show with a sporty tank done in men’s shirting over a crocheted skirt, she was saying, “I’m not just about glamorous dresses. I can do sportswear.” And do it well. True, she’s been showing — and starting runway presentations with — sportswear for a few seasons. But this time, it all had the air of a grand arrival, what with the very recent appointment of Susan Sokol as president of apparel and the imminent launch of a lower-priced dress line. (For more on Wang, see page 55.)

Even Holly Hunter, Wang’s faithful front-row celebrity who shops for red-carpet fare each season, approved of the designer’s direction. “I loved her daywear,” Hunter said after the show.

And there was a lot to like — sporty tanks, soft cashmere sweaters, the oh-so-chic cropped and kimono-style jackets in rich brocades. She worked the brocade, too, in all those skirts — straight, flared and pencil — which will surely catch the eye of the luxe-loving lady who seeks Wang out for dresses. But lest things get too heavy, there was frothy relief in the form of a series of gauzy blouses and ethereal layered skirts.

The same rich-versus-breezy motif ran through her beautiful evening looks. Hunter and Jennifer Connelly, also in the front row, doubtless took astute notes on the sleek silk sirens with smart tucks and pins. And for those hoping for something a little less obvious, Wang whipped layers of rosy chiffon over delicately sequined gowns or added a beaded obi-style band to the waist of another. The designer’s only misstep was in over-detailing what was lovely in its simplest form, as in the mid-thigh ruffling on a champagne silk column or the too-busy prints she introduced here and there.

Still, there was so much else to focus on. Like those men’s shirtings. They’re an idea Wang should explore a little more, because a handful of tops and a sweet tie-front jacket weren’t enough.

of nude, pink, yellow and blue, and the white crocheted dress and subtly knit cashmere sweaters looked great. The beautiful tulle tops with fine appliqués paired with metallic pants or skirts were also among her strongest pieces. Miller eschewed her typical bold prints this season, which worked to her advantage. The silhouettes on some of the jackets, however, missed the

mark, and a few of the Celtic motifs got the better of her.

Spring also marked the launch of Miller’s new higher-priced line, Nicole Miller Signature. Its pretty micro-paillete-embroidered gowns and separates in luxurious fabrics were sprinkled throughout the show and showed off her new, more sophisticated look. Overall, it was a strong effort for Miller, who does well with a light touch.

Monique Lhuillier: Monique Lhuillier, once best-known as a bridal designer, has now staked her claim as a ready-to-wear designer. After last season’s spectacular effort, the pressure was on for a repeat performance, and she delivered.

This time, Lhuillier introduced even more casual looks to her lineup, nicely rounding out an evening-centric collection. These came in the form of delicate little cashmere sweaters in sorbet colors paired with pretty lace tops and cropped or jeans-style pants. Some got the perfect dash of sparkle with silver belts or gold sequined tops. Lhuillier also teamed cardigans and billowing chiffon blouses with sexy floral swimsuits.

Of course, what she knows best is evening, and there were plenty of gowns for her PYT customers. Consider, for example, the string of lovely numbers in lemonade yellow and teal satin with chunky beaded necklines and the sexy twinkling gowns with plunging necklines. Only a yellow bustier dress suffered from an overabundance of frayed silk appliqués. Pretty clothes for pretty ladies is what Lhuillier does, and she does it well, but it would be nice to see her give them a sassy edge sometimes.