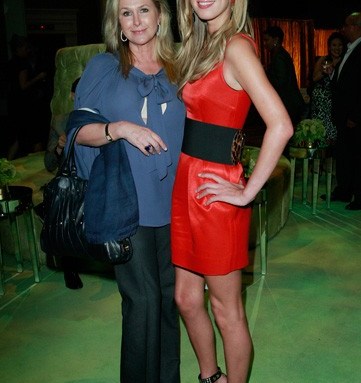 BEVERLY HILLS — Manolo Blahnik got star treatment here. Hundreds of fans gathered on the cobblestoned Via Rodeo, off Rodeo Drive, on Thursday night when the shoe designer was honored as the 12th recipient of Beverly Hills’ Walk of Style Award.

“This is a city of dreams, and it’s wonderful to see that luxury still exists here,” said Blahnik, who stressed that he owes a great deal to legendary Hollywood costume designers such as Gilbert Adrian, Walter Plunkett and Travis Banton. “It’s those boys, not me, who should be receiving such an award. If not for them, who would have created the looks for Bette Davis and Joan Crawford that inspire us all?”

Via Rodeo was decked out to resemble Marie Antoinette’s boudoir — Blahnik designed the shoes for the Sofia Coppola film — with tufted sofas and pastel macaroons. Blahnik ascended to the balcony of the Versace boutique to accept his plaque, which will have a permanent spot on Rodeo Drive.

Blahnik, who described himself as “terrified of crowds” was introduced by China Chow, daughter of his late friend Tina Chow, and actress Lucy Liu.

“I love how much he loves women and the elegance and sophistication he brings to everything he does,” Liu said.

Hilary Duff, Nicky Hilton and actress Jennifer Coolidge were among those who attended the ceremony and cocktail party.

“The first pair of high heels I ever bought were Manolos,” said Duff, recalling the mustard yellow pumps she bought at age 14. “I remember they were so expensive and they made me feel so grown-up.

” Referring to the current economic turmoil, Blahnik said: “These times are uncertain. I never got into this business to make money, but I hope that women will still want to invest in beautiful shoes, even if they buy less.”