For hairstylist Marc Anthony beauty is in the details. 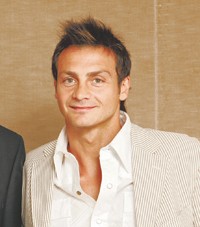 NEW YORK — For hairstylist Marc Anthony beauty is in the details, which is why the Toronto-based styler will attempt to fend off the current onslaught of competition in mass hair care with an updated offering and two new collections slated to bow later this year.

The company will introduce both efforts through a $10 million print advertising campaign that takes turns spotlighting each of Marc Anthony True Professional’s core collections, and reinforces the brand’s salon heritage with a thumbnail photo of Anthony.

Less than two years after repackaging his namesake hair care brand, Anthony has ditched the line’s sleek, clear bottles in favor of a rainbow of opaque, rectangular ones. Concerned with making the solution-based products easy for consumers to spot and shop, each collection is color coded with names in bold type running vertically down the bottle. The company will begin to phase in new packaging this July, and reintroduce the re-dressed collections with a series of print ads breaking in July beauty books.

“We are an $8 brand,” said Brad Kirk, who joined Marc Anthony Cosmetics last fall as chief operating officer and executive vice president. “We have to let people know there’s a superiority here,” he added, referring to the line’s premium price point and positioning.

Anthony, who looks to his salon for inspiration, plans to round out his offering — which currently includes Instantly Thick, Strictly Curls and Simply Straight — with the introduction of two new collections, Ultimate Moisture and Moisture Gloss.

The five-item Ultimate Moisture collection is designed to rehydrate hair with shea butter and natural soy. “I didn’t want to just mask the problem of dry hair,” said Anthony. “I wanted to create something that would correct it.” He added that the products regenerate the scalp, cleanse hair follicles and infuse the hair’s cortex with moisture. The items are Replenishing Shampoo, Daily Deep Conditioner, 30 Second Conditioning Treatment, Daily Leave In Conditioner and Replenishing Finishing Cream, which has become one of Anthony’s favorite products. Ultimate Moisture, housed in blue bottles, will launch in select retailers this summer, including CVS, Rite Aid, HEB and Ulta, with plans to roll out to wider distribution next year.

This summer, the company also will introduce Moisture Gloss to a handful of retailers — namely Ulta and HEB — with a wider launch planned for next year. Leveraging an existing product, called Moisture Gloss Daily Drops, the company created a four-item collection designed to impart weightless shine into the hair. The collection, dressed in pink bottles, comprises Brilliant Shine Shampoo, Brilliant Shine Conditioner, Diamond Shine Finishing Cream infused with mica and Moisture Gloss Daily Drops, which is now billed as an antifrizz and shine serum.

While executives would not comment on sales, industry sources expect Ultimate Moisture and Moisture Gloss to generate $10 million to $12 million in sales through 2007.

Anthony is also hard at work strengthening the brand’s ties to Hollywood. Over the last year, he has stationed himself backstage at the 2006 Alma Awards, where he met the singer Marc Anthony, set up a private lounge at the Oscars and attended the Daytime Emmy Awards.

“We are a true salon heritage brand backed by an active celebrity stylist,” said Kirk, noting the differences between Marc Anthony True Professional and the influx of other mass market brands billed as professional. The brand, which is currently sold in 23,000 U.S. doors, will face competition from Unilever’s Sunsilk, which makes its U.S. debut this month, and the upcoming revamp of Clairol’s Herbal Essences and Vive by L’Oréal Paris. Anthony acknowledged it will be an aggressive year in the space, but remarked: “One constant has always been that shelf space is tight.”