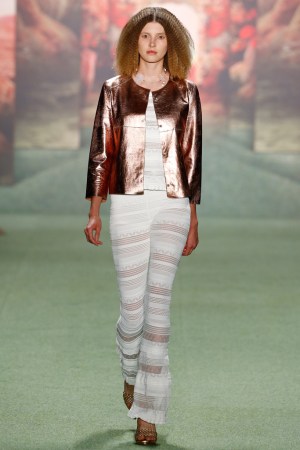 Festival-inspired fashion, Coachella or otherwise, was a major theme at retail this spring and summer, and commercial German powerhouse Marc Cain kept the story going for spring 2016 during Mercedes-Benz Fashion Week Berlin — though in a more sylvan form. The brand’s prerequisite dance-act opener had a flurry of damsels with rippling, unbraided hair and headbands skipping down the runway, holding hands, wearing all manner of flowing white attire. Unusual this season was that many of these looks then made it into the show lineup, including silky sheer peasant tops delicately smocked at the wrists or incorporating zigzag lace insets down the front, paired with long white skirts in stiffened cotton or short, flared skirts that billowed like curtains.

It was a pretty big span, but the kind of variety with which Marc Cain has made its name, and catered to divergent tastes, in an ever-expanding market base around the world. With Hudson Bay Company and Lord & Taylor executives spied in the audience — not to mention the American ambassador, John Emerson, and his wife Kimberly — North America could be next.