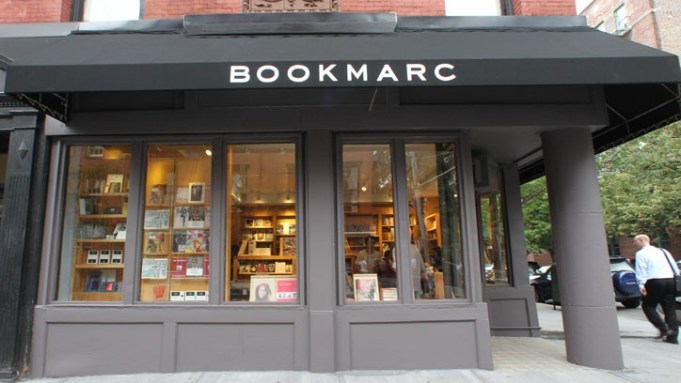 The opportunity for a name like Bookmarc, as the latest chapter — a bookstore — in Marc Jacobs’ mini West Village empire is called, would be hard to pass up. The store opened Friday at 400 Bleecker Street, formerly home to Biography Bookshop, and a space that president Robert Duffy had been eyeing for years. “It’s caddy-corner to our women’s collection store and I’ve always desired that space,” says Duffy. “We’ve always had a mix of books in our stores, so it was my dream to eventually one day have a bookstore on Bleecker Street.”

Duffy says he had no intention of making the space anything but a bookstore if not in the classic sense. “Bestsellers? No. Not unless it’s a friend of mine,” he says of his inventory. “We’ve developed a very big business in books. It’s more art books, it’s more photography books, and then it’s very personal to the company.…We have the luxury of picking somebody and commissioning something. I can ask one of the people that I work with that’s an artist that inspires me to do something, and we can make a book.” For example, “The Men and Women of Marc Jacobs,” by Brian Bowen Smith. The store will also carry vinyl records, CDs, a line of Bookmarc colored pencils and notebooks and customized Bookmarc Sharpies.

Bookmarc makes six Marc Jacobs stores in the West Village, with four on Bleecker alone. The company’s local expansion has received its share of criticism from neighbors. “I could have taken one giant space and knocked all the walls down like other people have done,” says Duffy. “Is it good for the neighborhood, bad for the neighborhood? I don’t know. My original store there was a dentist office that was in terrible disrepair.…I did my research. I found the original pictures of that store from 18-whatever, and I put in big plateglass windows, which were there in 18-whatever. Did it revitalize the street in a way? Did it make it a shopping street in a way? I didn’t ask everybody else to follow me there.…I think that having the men’s stores on West Fourth is much better than having two empty storefronts.” And to those who complain about the long lines pouring out of the store on Bleecker and Perry, Duffy’s listening: That store was turned into a collection accessories store last weekend. “There’s not going to be a line,” says Duffy. “I hope there is — but there won’t be a line of people to buy $3,000 handbags.”