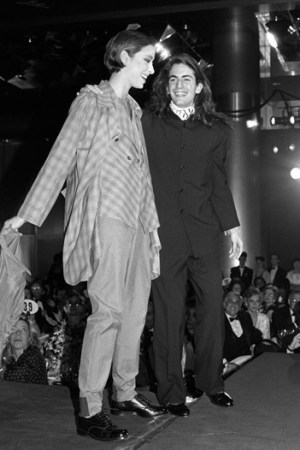 He was turning into the Angela Lansbury (or Susan Lucci) of fashion. But last Monday, perennial CFDA nominee Marc Jacobs took home the prize for Womenswear Designer of the Year. The last time he did so in the category was in 1997 and, before that, in 1992, the year of his notorious grunge collection for Perry Ellis. We decided to turn back the clock even further, to April 12, 1984, when WWD covered Jacobs’ senior fashion show at Parsons The New School for Design (then known as Parsons School of Design).

A retailer’s observation that “Parsons students seem to have greater polish and refinement” was, as the article noted, evidenced by “the assured demeanor of Marc Jacobs,” who won a trifecta of honors that night for his “vibrantly colored sweaters and innovative sportswear”: — Chester Weinberg’s Golden Thimble, Perry Ellis’ Golden Thimble and the Student Designer of the Year awards. “At Parsons, when something works, they make no bones about accepting it,” said Jacobs at the time. “If it’s totally foolish, they say so. The catalogue states emphatically that the school is about SA. One of the most wonderful things said to me there was, ‘Why not bring some of your colors and shapes into a more commercial context?’ It’s much harder to solve that problem and still be creative, wearable and functional. Bust darts in first year had little excitement — but you use the knowledge for something else.”

Also quoted in the story was designer Perry Ellis, who was Jacobs’ senior designer critic. “Ellis says he hires so many Parsons graduates that ‘they’re like an army running around his design room,’” the reporter wrote. Of course, the house of Ellis would go on to famously hire — and fire — the young designer. But that Parsons graduation show would prove more important in providing Jacobs with a long-lasting friend and business partner: A man named Robert Duffy was in the audience.