One wily shopper, who asked to remain anonymous, confessed to some rather underhanded tactics. 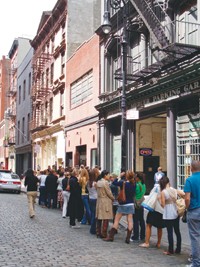 NEW YORK — It was 11:30 a.m. on Friday, and Nina Sernaker, a nanny, was on her way to Washington Square Park, stroller and tot in tow. Cutting through SoHo, however, something caught her eye: a sign in a window at 163 Mercer Street reading, “Marc Jacobs Secret Sale.” Putting her park plans on hold, she planted herself and her charge in line for the chance to buy the designer’s handbags, which were going for $150 a pop. According to Robert Rich, director of retail public relations, about 600 bags from Jacobs’ resort 2000 collection were shipped in just for the sale.

“Of course, I’ll wait,” Sernaker said. “This is when you call your friends in other cities and tell them what they’re missing out on.” And wait she did — for about 30 minutes, but that was nothing compared with some of the other shoppers. Megan Marsanico-Byrne arrived an hour and a half before the shop’s 11 a.m. opening and was still eighth in line. “I think the first girl got here at 8:45,” she noted. But it paid off — Marsanico-Byrne walked away with three candy-colored leather totes.

“People were literally running in and scooping up six bags at a time,” added Cortni Tuck, Nylon Magazine’s marketing and communications manager. “Twenty minutes before the store opened, the line was halfway around the block. I wanted the kelly green tote and it was gone by the time I got in. For me, it was very anticlimactic.” But that was hardly the case for the company — by 2 p.m., roughly 500 bags had already been sold, Rich said.

One wily shopper, who asked to remain anonymous, confessed to some rather underhanded tactics. “I weaseled my way to the front,” the 23-year-old admitted, “and shimmied along the wall and hopped in line.”

The huge crowd amassed merely through word of mouth. “They say ‘loose lips sink ships,'” remarked Pablo Migoya, director of sales for Thompson Hotels, who left before getting into the store. There were, as expected, plenty of fashion editors and public relations types, but also students like Susan Siegal, a senior at FIT. “I’ve only been waiting around for 20 minutes,” she said, “but I would wait five hours for Marc.”