Marc Jacobs' voluminous collection caused quite a stir - some liked its direction and some didn't - as the New York shows rolled on. 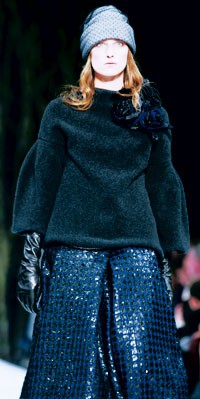 Marc Jacobs, consider yourself warned. People were livid over the outrageous wait, an anger not evaporated overnight as has been the case for the past 20 years. New York fashion, consider yourself lucky to be home to a company whose designer can stir the wild passions so evident on Tuesday morning, as retailers and editors hotly debated the merits of a remarkable show. Love it or hate it, this collection went to the core of this industry’s essential issues, and the complicated tangle of artistic, social and commercial themes that keeps it afloat.

When Beyoncé Knowles finally emerged from backstage at the Lexington Avenue Armory somewhere near 10:30 last night, she was greeted by a raucous round of boos the likes of which seldom pulse through major fashion show venues. Turns out, she was wrongly accused, as K.C.D. staffers then ran a lap of interference around the front row, explaining, “The clothes are all here now. We’ll start soon.” And so, after 90 minutes of mass scowls, sighs and swearing to skip it next time, the crowd settled in for 10 minutes of audacious brilliance in which Jacobs showed one of the best collections of his career. It was certainly his gutsiest since grunge, made more so by the circumstance of his stature: A designer at fashion’s pinnacle has so much more to lose than a renegade kid.

Of course, fashion is nothing if not a judgement call. The event caused a level of partisanship and ill will to rival that of the last Presidential election. While Bloomingdale’s Kal Ruttenstein — a major Jacobs’ fan, there from the beginning — said, “I think it was my favorite Marc Jacobs collection, even better than grunge,” at least two senior-level audience members, albeit less inclined to speak for attribution, used the word “hate.” Others took a less impassioned view. “Sometimes you’re leaving Marc’s show, and you’re not sure you got all of it,” said Neiman Marcus’ Karen Katz. “But then over the next few seasons, it becomes very influential.”

But no one defended the wait. “Marc’s an incredible talent, but this called for an apology,” said In Style’s Hal Rubenstein. “When you meet Marc in person, he’s so charming and has such incredible respect for what other people do. But when a show begins like that, there’s a disconnect. Because all of a sudden, you feel that this person doesn’t give a crap about anything I have to do and about my requirements. That doesn’t match with Marc, and I don’t understand. That’s the part I’d like you to print.”

Certainly, the preshow mania provided ample fodder for those who take glee in lampooning fashion’s considerable follies. A young woman known to absolutely no one, but done up lesser-celebrity style in full runway regalia, got the same paparazzi treatment as Uma Thurman. The photographers circled around, shouting, “Ma’am! Ma’am!” (A pop star from Hong Kong, it turns out.) She and Uma had long settled in before Beyoncé’s rude welcome when the locusts swarmed again. Let’s face it, ticked or not, no photographer could risk missing the shot. Finally, the pack retreated. Some had to be nearly dragged away, while others sashayed quickly at the sight of “Shorty,” the star’s mammoth bodyguard.

By show time, the crowd mood ranged from antsy to hopping mad, but none would dare be the uncool kid who got up and left. Still, with enough support, Joan Kaner is set to take a hike next time out. “If you get people there at nine, and you can’t get it done by 10, then move it to 10 the next morning,” she said. “We should all just get up and walk out.”

It is, of course, testimony to Jacobs’ clout, his significance to New York fashion’s worldwide reputation, that that has never happened, and that reality in turn irritates people all the more. Which may or may not have impacted the conviction with which both retailers and editors voiced morning-after opinions. Calling it “grunge couture,” Kaner cited “lovely jackets and coats. But all those long, heavy skirts don’t cut it.”

Not surprisingly, the most overt loathing was kept off the record. Since she’s on the record today anyway, Suzy Menkes spoke up. “I knew what Marc was trying to do, but a lot of it can only be done in a couture atelier,” she said. “I know he spends a lot of time in Paris, but he shouldn’t neglect the American essence which is about charm, ease and prettiness. I don’t think any of that was in the show.”

Elizabeth Saltzman of Vanity Fair acknowledged that this was far from her favorite Jacobs collection. “Maybe it was just a step forward,” she said. “Look at Miuccia Prada last season. People were less accepting of her show, and now we’re seeing its influence.”

Influence schminfluence, countered others. According to one retailer, “It looked like clothes for the Addams Family.” Told that that may have been the point, the executive responded: “Well, then he succeeded.”

But such sarcasm aside, the observation has merit. Jacobs indeed set out to de-prissify his approach, finding inspiration in Violet, the glum teen heroine of the cartoon film “The Incredibles” and Tim Burton’s “Nightmare Before Christmas.” Folding in doses of Saint Laurent (to the chagrin of some) and Yohji, and a soupçon of Ellis Island, he had the making of a fashion controversy, and a major change of direction. Although he has been on a phenomenal spree for some time, he has felt personal pressure to move on from his ultraluxe, slightly ironic lady-like look. He tried once before and failed — his fall ’03 Courrèges fling — but the itch remained, and he was determined to break away this season.

In merch terms, the primary news was volume amped up to the max. Yet there was much more to the message than big skirts in weighty fabrics. This show offered a darker, broodier world view than anything Jacobs has proposed in years, yet clung to a hopeful romance. And though the designer is fond of saying that, “In the end, the [collections are] all about grunge,” this one flaunted mega renaissance at every turn.

It also reflected the broadening of Jacobs’ perspective in Paris, and his ongoing friendships with women such as Sofia Coppola, Rachel Feinstein and Elizabeth Paxton. “These are not Gucci girls,” he said. “A group of us went out dancing in Paris one night, and Sofia wore a Lanvin gown and flat shoes. The look is a little do-it-yourself, not too sophisticated or show-offy.”

But surely there’s more than one way to show off. “No question, I felt a certain confidence I didn’t have before,” Jacobs said. “I had conviction about this collection. Even doing the looks with Venetia [Scott], I felt very sure of what I wanted.”

Even the show’s most ardent critics might be persuaded in the showroom. Sure, some skirts sported a clunk factor, only the artsiest editors will call in the clown smocks, and flashy, zillion-dollar chevron minks have limited potential. But step right up for the coats, the little jackets and spiffy cropped pants, the amazing cashmere sweaters covered in lace. And how about the fabulous jeune fille eveningwear, especially dresses in red and burgundy velvet? As for the accessories, with the mouse shoe now a classic, Jacobs’ myriad flats, some done up with rosettes, look like clear winners, as does the major expansion of the handbag line, now on view in the showroom.

“I thought it was a brilliant collection,” said Robert Burke of Bergdorf Goodman. “I find it very interesting that so many people want to penalize American shows for making a statement, while in Paris, it would be perfectly fine to do such a show.” Burke added that the Bergdorf’s crew is not “shaking in our boots over what to put in our store. When I go to the showroom, there will be plenty to buy.”

Barneys New York’s Julie Gilhart loved “the story, the music, the set. Marc upped the ante. It’s not American fashion, but international fashion. I felt like I was in Paris, I was so happy.” And in her joy, she did Burke one better: “At 11 p.m., I didn’t want it to end.”

— With contributions from Lisa Lockwood and Marc Karimzadeh