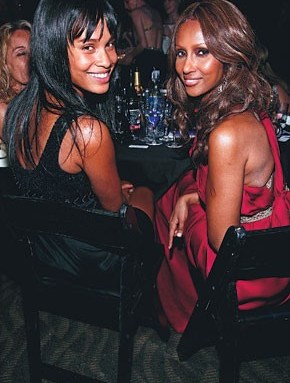 Theatergoers en route to “Jersey Boys” did a double take Wednesday night outside the Roseland Ballroom next door, where Marchesa’s name was up in lights along with St. Jude Children’s Research Hospital.

Marchesa’s Georgina Chapman and Keren Craig rounded up Diane Kruger, Maggie Rizer, Iman, Michelle Monaghan, Joy Bryant, Molly Sims and some of their other fashionable friends for Design Cares’ “A Night of a Thousand Lights,” a benefit for St. Jude’s. Phillip Bloch emceed the event, which raised $300,000.

Having already presented the collection they showed Wednesday night to the fashion crowd, Craig and Chapman were unruffled by the hundreds of people crowding the bar and various food stations before the Roseland show. “I just hope we raise the money needed to help these children. That’s really our mission here tonight. That’s a little more important than fashion,” Chapman said.

Craig added, “Everyone is doing this for nothing,” referring to the production team and the scores of volunteers on hand for the event.

Kruger said she has been busy visiting hospitals for an upcoming film project about Mexico’s black market organ donor business with Forest Whitaker and Dylan McDermott. Dressed in a backless blue Marchesa gown, the actress said she plays a woman whose husband resorts to going south of the border for help to try to save their dying child. Writer-director Baltasar Kormákur, who is best known for “Jar City,” will start shooting in three weeks, Kruger said.

Rizer, who wore a long-sleeve, short Marchesa dress, is looking to give dogs some extra care. The model and her boyfriend, Alex Mehran, have been scouting the West Village for a spot to open a dog day care center and spa. The latter will be for pets and their owners. Trying to find a ground-floor, glass-front 3,000-square-foot space has not proved to be easy, but the pair hope to open a place in the early fall. The building will be Apple store-inspired, in that there will be as much glass as possible to allow visitors and passersby to see what’s going on.

Rizer’s father raised golden retrievers and she has two of her own. “They’re like my children,” she said.