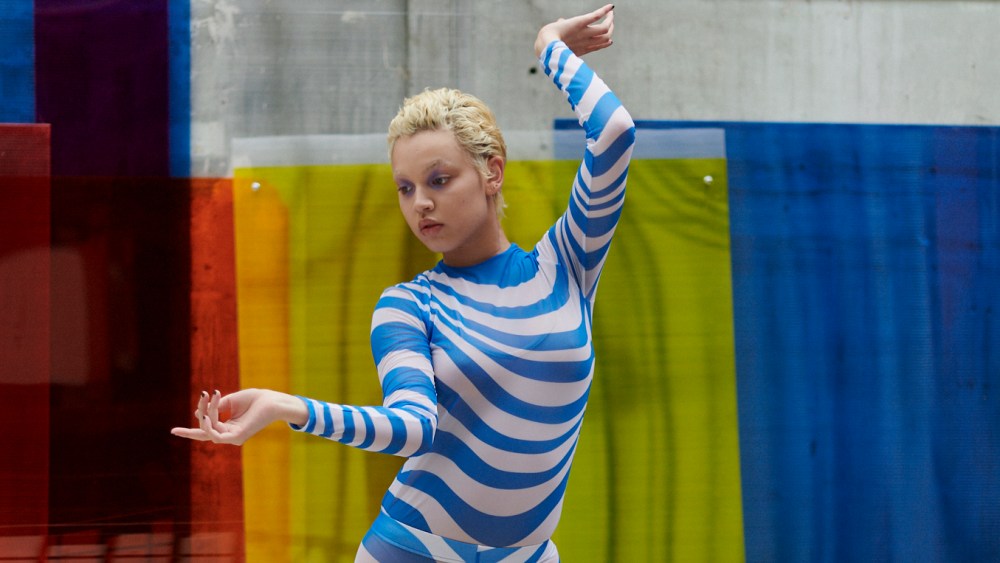 While Marco Ribeiro was getting noticed and gaining traction in the Paris fashion scene before the pandemic, the shutdowns put everything on hold. Ribeiro was filled with self-doubt and waffled on what direction he should take his designs. He decided to follow his instincts, amping up his use of color even during those dark days.

“I thought, ‘Let’s have fun, let’s do something colorful, explore shapes.’ It was a turning point for me, and people were so into the collection, so receptive,” he said. One of those people who noticed was Harry Lambert, stylist to Harry Styles, who wore Ribeiro’s pieces on tour and on album promos.

Now with his first show staged during Paris Fashion Week, the Marco collection was presented as part performance art, part ritual dance and all joy. Dancers emerged from fabric hung from the walls as a rolling rack with the collection sat center stage, while they moved among the looks.

Ribeiro continued to explore the circles that have become his signature, and revisited pompom nipple T-shirts and sheer body stockings. He used stripes as waves as touch points, particularly well on a pink and green pajama-style shorts suit.

To say he toned down the color is a bit of a stretch, but this season he used softer pastels on T-shirts and even debuted his version of a khaki pant, though still embellished with subtle ruffle pleats at the pocket. Titled “Waves of Love,” he was searching for a more feminine energy this season.

Ribeiro’s Afro-Brazilian perspective means he uses dance as inspiration, and plays with fabrics and shapes to explore the relation between the items and movement. At the end of the presentation, dancers came together in formation for a powerful, almost ritualistic finale routine.

“When music comes on something magical happens,” he said. “For me, you put things on and OK, it’s a shirt. But it also needs the human body for movement, because without a body it is just an object. When they come together as a combination, they have fluidity. It’s about coming back to the body.”

“I love the traditional French couture, but I also feel like I bring something as a Black, gay, Latino man — it’s already quite a lot. But the idea is that other brands can do black-and-white looks, but we also have color so why not use that? I’m trying to bring a Latin American spirit to Europe. The colors are positivity and joy, and I feel like it’s important.”

He started out with womenswear, but after stylists started placing pieces on men — including Styles’ stylist Lambert — he has now added more traditionally masculine-coded pieces. But it is clear that the collection doesn’t have boundaries.

“Garments don’t have a gender,” he said. “Human people put an agenda on a garment, but garments are just garments, you know?”

Earlier this year, Styles approached him to collaborate on the first makeup products in his Pleasing skin care line. The result is an eclectic collection of pressed powder pigments, cream colors and multi-use gloss. Ribeiro’s fashion week presentation also doubled as the official launch.

Working with Styles was easy, said Ribeiro, as the singer gave him carte blanche to have creative direction on everything from the products, to the ad images and the packaging.

“It was huge for me, and he was so lovely. It was very fluid and like working with friends. We kind of shared the same beliefs,” said Ribeiro. The scope of work pushed new boundaries for the young designer, though he was clear on his own concepts from the very beginning. “They involved me in the whole process, and that was very beautiful. It was challenging, in a good way. Challenging but joyful within it, somehow.”

He sees connections between the two worlds, and it’s another aspect where he wants to be fluid and break down boundaries.

“Fashion needs beauty, and beauty needs fashion. I want it to be close to people, so it doesn’t feel like this ‘high fashion’ distance somehow. I like this idea that there’s no distance between me and you and people — we are all the same. So that’s what I tried to embrace and they were very happy with the concept,” he said of hosting the Pleasing launch at his show instead of some formal party.

As for having the launch of a makeup line at an event where the face was not the focus, Ribeiro answers with his usual insouciance. “Why be so cliché? OK, it’s a beauty brand, but there are so many things we can do as a beauty brand and as a fashion brand, where we can bend the limits and be more more fluid. You know — why do we need to separate fashion?”