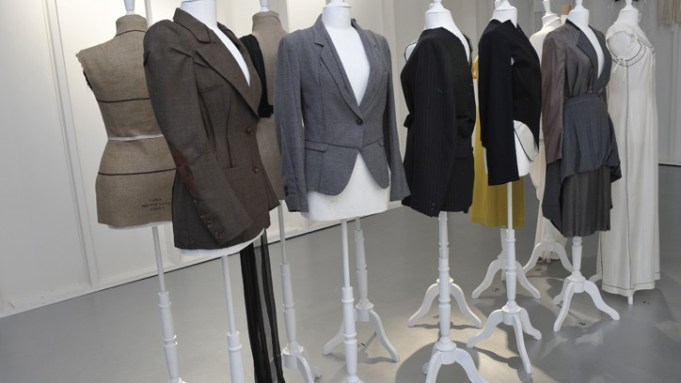 ANTWERP, Belgium — One could be forgiven for imagining that the whole cast of “Grey’s Anatomy” had been teletransported to the MoMu fashion museum here Thursday, such was the number of white coats racing around the building.

The event, which follows a Margiela showcase in Beijing’s 798 Art District in June, marks a poignant, full-circle homage to one of the city’s most iconoclastic, resolutely reclusive and now commercially successful fashion exports, due, in part, to his eyebrow-raising alliance with Diesel’s Renzo Rosso in 2002.

The aim of the exhibition, according to MoMu’s artistic director, Kaat Debo, is to explore the house’s main themes, from its treatment of time and history to the interpretation of the body. The scenography, by Margiela alum Bob Verhelst, is certainly in keeping with the designer’s philosophy.

Employing one of the house’s most familiar leitmotifs, a labyrinth of white wall partitions divides the vast exhibition, some splashed with disorienting trompe l’oeil views of the space when it was empty. White, Margiela’s ruling nonshade, is omnipresent, but grades of silver also come into play, from the glittery silver carpet at the show’s entrance to a mirrored display bar of silver, cloven-hoofed Tabi boots.

“Humor is a very important element of their oeuvre,” said Debo, using the collective term. Margiela always prefers communicating on behalf of the maison as “we.”

Debo said the show has already won the approval of the designer, who was there “on all fours” earlier in the week, discreetly putting in the final tweaks. But as fashion’s consummate Invisible Man, Margiela was not expected at the opening soiree.

Fittingly, Debo chose “incognito” as the show’s opening theme, starting with a dramatic silhouette portrait of the Margiela team — minus Margiela — carved out of white Styrofoam.

Hiding behind the show’s first wall, meanwhile, a group of raised glass cases proffer further signs of the house’s allegiance to anonymity, from a pair of leather boots sheathed in black chiffon to a black sweater tacked with four iconic white pick stitches.

Margiela is also famous for elusive store locations. “I recently went to visit their London store and got lost for half an hour looking for it. They expect an effort on the consumer’s behalf,” Debo said.

Elsewhere, glass cases showcase offbeat invitations from across the years, including a typed letter dating to 1990, signed by all eight of the house’s employees. Today, the firm counts 70 staff members and, as reported, revenues catapulted 50 percent last year to 60 million euros, or $82.2 million at average exchange.

Intermingled among archive pieces throughout the show stand covered busts, which will display spring 2009 looks, fresh from the Paris runway. “This will hold a Plexiglas backstage-pass necklace,” said Debo, motioning to one empty box.

Amid oddball “artisanal” designs, including a waistcoat crafted from broken dishes and wire, are designs that highlight Margiela’s skills as a tailor — if an unconventional one. One dress made from pinstriped suit-lining fabric, for example, its darts exposed, points to Margiela’s love of revealing the production process.

“Back then it was provocative to present high-fashion garments as if they were worn out,” Debo explained. “A tailor traditionally hides all of the tricks used to enhance the body. Margiela opened the box of tricks.”