Designing with both leather and technical fabrics, Marina Hoermanseder offered a creatively embellished spring line featuring looks that ranged from extravagant to prim. 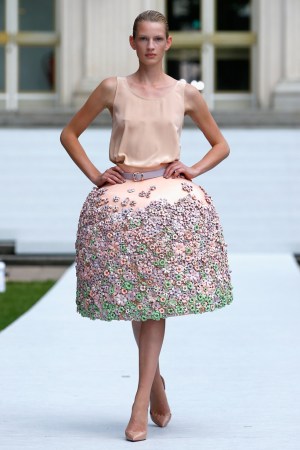 A thousand flowers bloomed at Marina Hoermanseder’s off-site outdoor fashion show. Actually, it was 8,000, and they were leather — wet molded by Hoermanseder and her team by hand. The lovely pastel, neutral and brilliant blue blossoms sprouted from skirt seams and adorned handbags and headpieces. They came sprinkled on shoulders and bedecked the Berlin-based Austrian-French designer’s extravagant bustiers and bell-shaped skirts, also constructed in her favorite material: leather. Hides were punched and perforated, the edges of suede were draped into backless top, and wrap shorts were pinked and scalloped.

But there was a wilder side to this garden party. Hoermanseder is best known for her orthopedic-inspired corsets and restrictive skirts made of buckled belts. Both were on hand this season and yet felt more sweet than salacious, thanks to soft shades and feminine detailing.

While the collection took cues from embellished folkloric garb from the Austro-Hungarian Empire, it also incorporated modern materials. Stiff yet smooth technical fabrics were formed into prim princess-seamed blouses and smocked into peaks on knee-length shorts and a rose gold bodice that had been 3-D printed. A buzzed-about presence since her Mercedes-Benz Fashion Week Berlin debut in January 2014, and beloved by performers such as FKA Twigs, Hoermanseder was one of two designers chosen for the new Fashion Council Germany’s mentoring program, which starts in January.