Razor-sharp cheekbones, killer brows and a dash of je ne sais quoi—the 19-year-old model has it all. 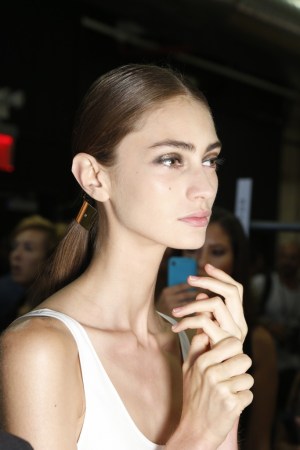 WWD: How did you react when you found out that you had walked the most shows this season?
Marine Deleeuw: I was really surprised. My agency sent me something that said, “Congratulations, you are the top girl.” I was like, “No way guys, that’s not possible.” My friend, Josephine Le Tutour, was doing every show—everything—so I was surprised. But we got coffee and joked about it. It’s not a competition.

WWD: What were some of the highlights of your season?
M.D.: I think my best memory was walking in the Dolce & Gabbana finale. Chanel was one of my favorites. I took a lot of pictures there because it was so nice. Chanel is always so big, and I feel so little. Like, I am nothing compared to this.

WWD: What do you carry with you at all times during fashion week?
M.D.: A phone charger, which is good when you have no battery and everyone is trying to call you. Then, a lip balm, some moisturizer and my phone.

WWD: What do you do after the shows every night?
M.D.: I’ll shower and eat and go right to bed. Next season I think I’m going to try to go [to parties]. Some people will say, “Come to the party, it’s going to be fun!” And I say, “Yes but I have a lot of shows tomorrow and my face is sh-t and I’m tired, so I can’t go.”

WWD: What was your final show of the season?
M.D.: Hermès. It was really nice. Backstage, there was some girl doing massages and Julia Nobis was playing her guitar. It was the last hoorah.

WWD: What did you do to celebrate the end of the season?
M.D.: I went directly home, which is two hours by train. I took the car to pick up my stuff, and then I took the subway to the train because there is a lot of traffic in Paris. But I saw my family and there was a big, heavy French dinner for me. [I thought,] “I’m home.”