Marketing Intelligence: Strip-Club Chic Is Taking Off … A Moving Target

STRIP-CLUB CHIC IS TAKING OFF: Strip-club chic has slithered its way into mainstream fashion marketing over the past year or so, gathering momentum in ads such as a Baby Phat billboard in Times Square featuring Kimora Lee Simmons... 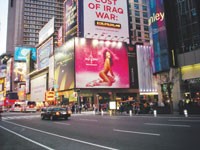 STRIP-CLUB CHIC IS TAKING OFF: Strip-club chic has slithered its way into mainstream fashion marketing over the past year or so, gathering momentum in ads such as a Baby Phat billboard in Times Square featuring Kimora Lee Simmons nude, save for her Baby Phat sneakers, and Galeries Lafayette’s offer of stripping lessons, as well as in music videos like the White Stripes’ “I Just Don’t Know What to Do With Myself,” which portrayed a scantily clad Kate Moss pole-dancing.

Such music video salvos have always served as marketing vehicles, for the bands most directly and for their trappings — fashions, props, settings, etc. They were roundly criticized as thinly veiled commercials when MTV launched back in the ’80s, and signal the swing of strip-club imagery from dive bars and table dancing clubs into everyday life, with an appeal aimed at young adults and teens, observed Allison O’Keefe Wright, senior strategic consultant at Headlight Vision, a London-based brand consultant that counts Nike, Unilever and Nokia among its clients. “Young consumers can see this [phenomenon] as a way to have something slightly edgy or illicit in their lifestyles,” said O’Keefe Wright, who is global editor of D_Code, Headlight’s annual analysis of leading-edge culture and marketing worldwide.

Despite the hoopla, the mainstream potential of the strip-club aesthetic is as yet largely unreflected in the five brands of apparel bought most by the teens and twentysomethings targeted by such marketing, with the exception of the second most heavily purchased, in the 12 months ended this February, according to NPD Group: Victoria’s Secret. Old Navy led the pack, and Gap was third, followed by Express and American Eagle. “There are some categories in which you can push people to be responsive [to strip-club chic], like music and movies; apparel is not one of them,” maintained Marshal Cohen, chief industry analyst at NPD Group. “It’s a question of how far you can push the envelope and still be socially acceptable.”

A MOVING TARGET: Apparel advertisers have yet to get a grip on the Millennials, a group of tweens, teens and young adults, ages 10 to 27, most of whom are too busy indulging in nontraditional media and attending various events to fall under the spell of fashion ads.

The persistence of this symptom, which has been festering for a few years, was borne out by trend forecaster Zandl Group. In monthly mall intercepts of shoppers and mail surveys, conducted between June 1, 2004, and Feb. 10, 2005, a random sample of about 250 females, ages 13 to 17, and 250 young women, ages 18 to 24, showed fewer than one-fifth of either group bought apparel because of advertising. Just 16 percent of the teens and 5 percent of the young adults said they were so swayed.

Further, not one apparel brand was able to parlay an ad into persuading more than a 1 percent share of those youths and young adults to purchase their products. Among those snagging the slim 1 percent of citations were Old Navy, Baby Phat, Express, Gap and Levi’s, among teens, and Express, Old Navy and Victoria’s Secret among young women.

“[Millennials] are more influenced by entertainment: TV, movies and music videos,” said Irma Zandl, president of The Zandl Group, adding these are media yet to be tapped significantly by most fashion players.

The good news for the fashion crowd, uncovered by The Zandl Group, is that a much bigger portion of teens and young adults are moved to buy apparel when they want the newest thing: 26 percent of the girls, ages 13 to 17, and 22 percent of women, ages 18 to 24, said they go for it.