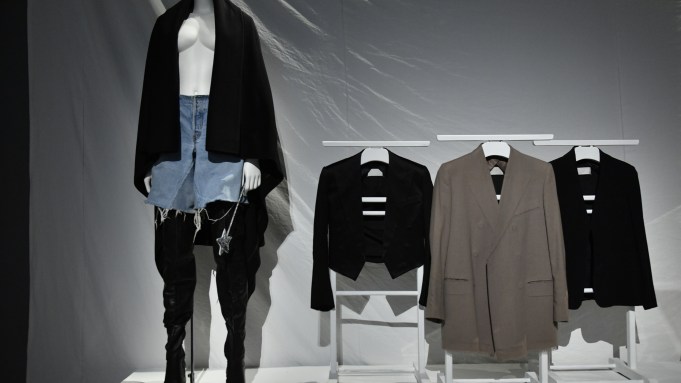 PARIS — Martin Margiela is having a moment, and not just on the catwalk.

The Belgian designer, who left his namesake company in 2009, is the subject of a retrospective at the Palais Galliera, the fashion museum of Paris, which opens to the public on Saturday. “Margiela Galliera — 1989/2009” is the first big exhibition in France dedicated to the designer, who helped to curate the show.

In parallel, an exhibition focusing on his work as artistic director of women’s ready-to-wear at Hermès will open at Les Arts Décoratifs later this month, after debuting last year at the MoMu Fashion Museum in Antwerp. “Margiela: The Hermès Years” is scheduled to run here from March 22 to Sept. 2.

Margiela, now 60, not only questioned the structure of garments, but also challenged the structure of the fashion system by opting to remain anonymous, staging his shows in venues like car parks or vacant lots, and giving his clothes a plain white label with no brand name.

The Palais Galliera show comes at a time when designers from Demna Gvasalia at Vetements and Balenciaga, to Kanye West with his Yeezy lines, are reviving Margiela signatures like oversize clothing and nude body stockings.

But the timing is pure coincidence, according to curator Alexandre Samson, director of contemporary collections at Palais Galliera. The exhibition was planned for 2016 as a sort of guerrilla happening that would stealthily take over the entire venue during the course of almost a year.

“We realized that in order to do the work properly, to find back the pieces across the world, to get in touch with collectors, to track down the information, we needed more time,” he told WWD.

The institution had a head start: with 400 Margiela creations in its permanent collection, it owns one of the world’s largest museum collections of the designer’s clothes.

“Palais Galliera was the first European museum to collect Margiela, as early as his second collection. We systematically bought two or three complete silhouettes per collection,” Samson noted. “We have almost every piece from the first five years of the brand, which are still the rarest nowadays.”

The show, scheduled to run until July 15, is the last before the museum closes for a year for renovations that will see the opening of a permanent exhibition space, sponsored by Chanel, in its basement.

It features 130 complete looks in total, many of them tweaked by Margiela and each displayed on a customized mannequin, thanks to Dutch manufacturer Hans Boodt Mannequins, which sponsored the exhibition. “It’s really a dialogue between the museum and the designer,” Samson remarked.

They are set out in chronological order, though not every collection has been included. Margiela, who true to character declined to be interviewed, also worked closely with the museum’s staff on the catalogue, which features detailed notes on each show in the format of police reports.

“This gave us a glimpse of the extraordinary coherence of Martin Margiela’s work — the extent to which each collection picked up where the last one left off. In the end, you feel like you are really witnessing a creative journey,” said Samson.

“He’s not afraid of repeating himself. To him, if an idea is good, it’s an idea that can be developed over many collections until it has run its course,” he added. For example, the oversize theme Margiela unveiled for spring 2000, to mark the new millennium, was stretched out over five consecutive collections.

His collections in 1997 were both based on reinterpretations of the Stockman dressmaker’s dummy. The one after that consisted of flat clothes, inspired by the paper patterns of the previous season.

“His technique is exceptional. After all, he is one of the rare designers to have come up with new shoulder structures,” said Samson, referring to Margiela’s experiments with linebacker-sized shoulders, funnel-like tops and exposed padding.

Other cherished themes are recycling: the show features tops made from athletic socks and inverted wig tops, and dresses pieced together from second-hand scarves and hosiery. Meanwhile, the “Replica” line consists of copies of vintage outfits such as a Belgian skirt suit from the Fifties.

The design of the exhibition reflects Margiela’s deconstructed aesthetic, with spaces left intentionally raw. Visitors enter through a plastic tarp, and there are rough white brushstrokes on the walls. Exhibits include grainy catwalk footage and Super-8 movies shot by the designer.

There are also three “fan rooms” inspired by the work of Japanese photographer Kyoichi Tsuzuki, which shows people in small spaces with large collections of designer clothes. Here, the rooms are imaginary, serving as time capsules for various collections.

The exhibition closes with items from Margiela’s 20th anniversary show, which turned out to be his last.

“He left it all behind in 2008 because he felt everything had been said and every idea explored. As fashion historians, we are in a position to observe the prism of designers over the course of several decades, and if we’re being very honest, the period when they are truly relevant usually lasts 10 to 15 years,” said Samson.

“He had a solid 20-year run, with the occasional collection that was not as good, but generally extremely interesting and well-developed propositions,” he added.

“I think that beyond his creations, what designers today like about Margiela — and the reason they view him as an absolute reference — is the coherence of his work and above all, his freedom of tone,” he said.

“He’s probably one of the designers who made the fewest concessions to the system. Why? Because he followed his instinct and if people liked it, great, and if they didn’t, it didn’t matter. He listened to people around him, but a lot of the time, he just went for it,” he added.

“I think that freedom of tone is very rare today among young designers. They are always concerned about looking a certain way and saying the right thing,” Samson said. “Martin Margiela always wanted to show what others were concealing, fashion’s hidden side.”