Katrantzou secured a venue that luxury brands and designers had coveted for years, and showed her most ambitious collection to date.

ATHENS — Destination runway shows are no longer big news, but when they’re held against an ancient backdrop by a young British brand, on a small budget, they take on a whole new meaning.

Mary Katrantzou dreamt big for her 10th anniversary show, which unfurled Thursday evening at the Temple of Poseidon, against the backdrop of the Mediterranean. Not only did she manage to secure a venue that luxury brands and designers had coveted for years, she showed her most ambitious collection to date.

The show, held in association with the Greek charity Elpida, was spearheaded by the philanthropist Marianna Vardinoyannis, who reached out to Katrantzou to join forces and mark their respective anniversaries: Katrantzou has been in business for 10 years, while Elpida has just turned 30.

Together Vardinoyannis and Katrantzou succeeded where other European luxury brands failed: They managed to negotiate a complicated process and secure the approval of Greece’s Central Archaeological Council to show at the temple. 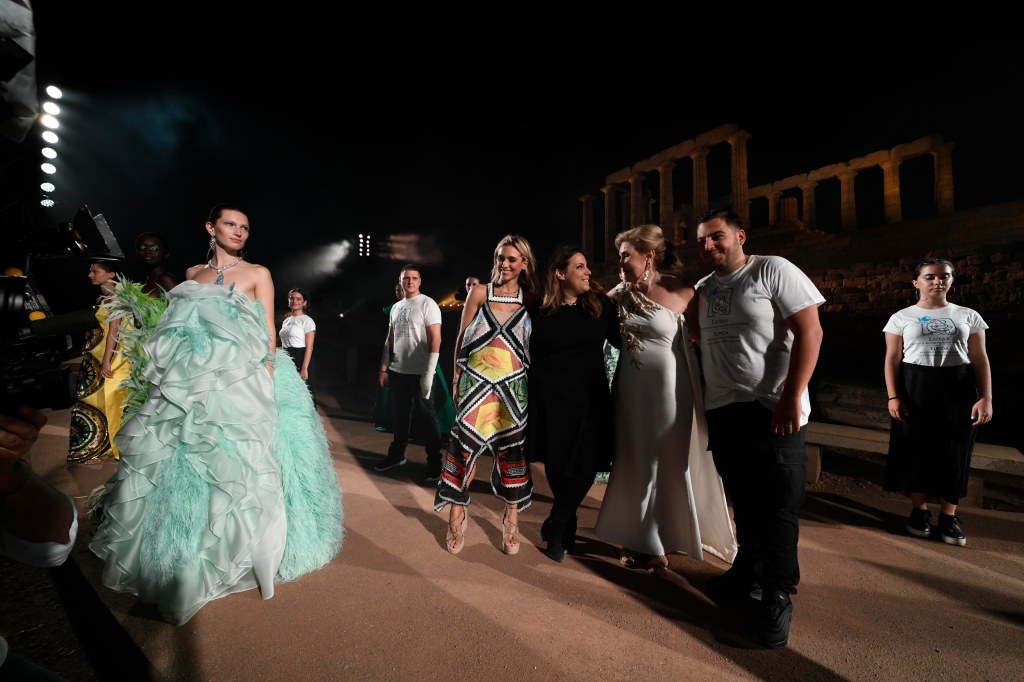 They also lived through an organizational nightmare, including unexpected rain showers and having to obtain approval for every runway shot from an archaeologist.

As if on cue, the rain receded before the show, as a group of glamorous Katrantzou guests, dressed in the brand’s exuberant printed creations, made their way to Sounion, outside Athens, to witness the designer’s emotional tribute to her home country.

“I always thought to myself how wonderful it would be to be able to do something in Greece for a great cause, more than just a dinner with your clients, and invite international guests to discover something new in the country,” the Greek-born, London-based Katrantzou said.

Katrantzou’s fellow Greeks came out in force to make the show happen: Ancient Greek Sandals created the footwear, jeweler Eugenie Niarchos designed the carved wooden boxes that were gifted to guests, while Bulgari, which has Greek and Roman origins, provided the jewels. Aegean Airlines chartered the flights that transported some of the guests to Athens.

“There are a lot of conversations around shows and the carbon emissions of flying people or the pieces being wasted, so we wanted to do it in a very intimate way with a small number of guests. And we tried to involve great local companies, and to do it in a sustainable way,” said Katrantzou. “For me the real meaning was also doing a show dedicated to charity, as a designer you connect to the collection differently and start aiming higher.” 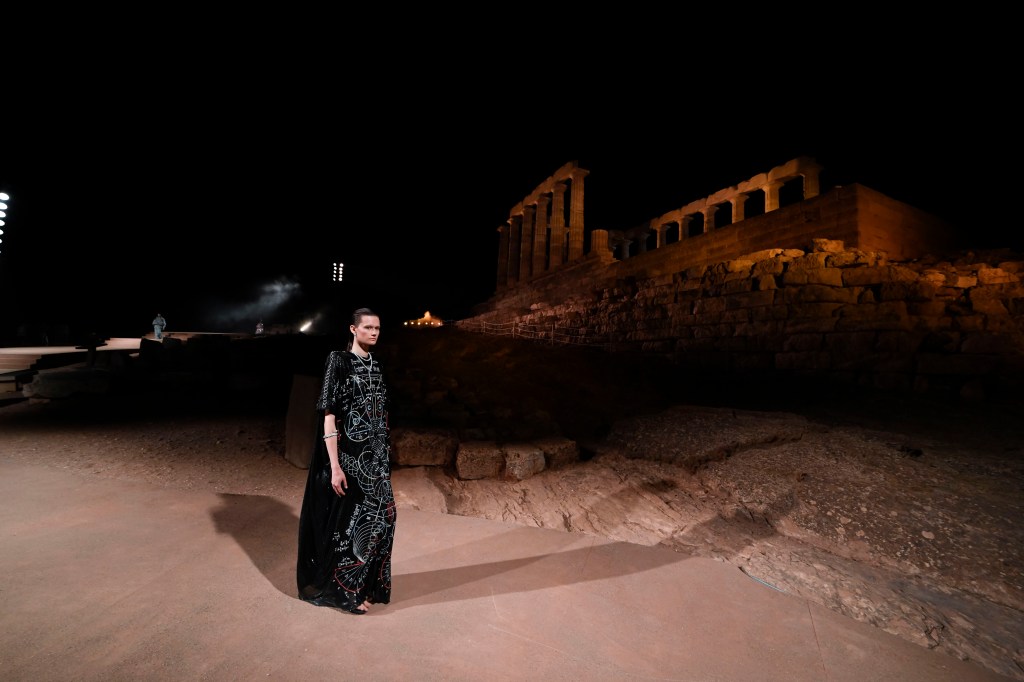 She did aim for the heavens, presenting a couture collection of 23 looks, each of which explored a different technique or idea originating from Greek philosophy: A quote from Aristotle was transformed into beaded fringe; ideas from algebra or trigonometry influenced the drapes and geometrical structures in the silhouettes, while intricate feather embellishments were made to resemble olive branches, a symbol of peace and victory in ancient Greece.

“Every piece is extremely technical, and with a very short amount of time to prepare, it meant we were really pushing it,” said Katrantzou.

Katrantzou has been teasing her couture ambitions for a while: She staged a retrospective after her spring 2019 show in London that highlighted her flair for embellishment and intricate construction techniques, while in February the brand’s show was heavy on all-feather demi-couture pieces modeled by the likes of Natalia Vodianova.

This time, the collection was more forward-thinking and helped to highlight the potential of the brand as it enters its second decade. Katrantzou is looking to explore the promising opportunity of made-to-measure and of building her private clientele.

“Women absolutely — I think — come to us to have something that is uniquely designed for them, so we’re looking at made-to-measure more and more,” said the designer, explaining that while the pace of the industry might not allow her to take on all private commissions, or go on to develop two couture collections a year like other big luxury houses, she sees opportunity in servicing clients one-on-one, and taking on private orders for the more elevated pieces she shows on her runways.

“I live in London and everyone can come here and buy the pieces. Our VIP service in terms of buying from our web site or visiting our atelier and making a personal order is excellent, so I’m more interested in developing this than thinking about a store. It’s not a conversation about retail being irrelevant, but the amount of investment and time you’d need to dedicate to one [store] wouldn’t — I feel — be equivalent to what you get in return,” added the designer. 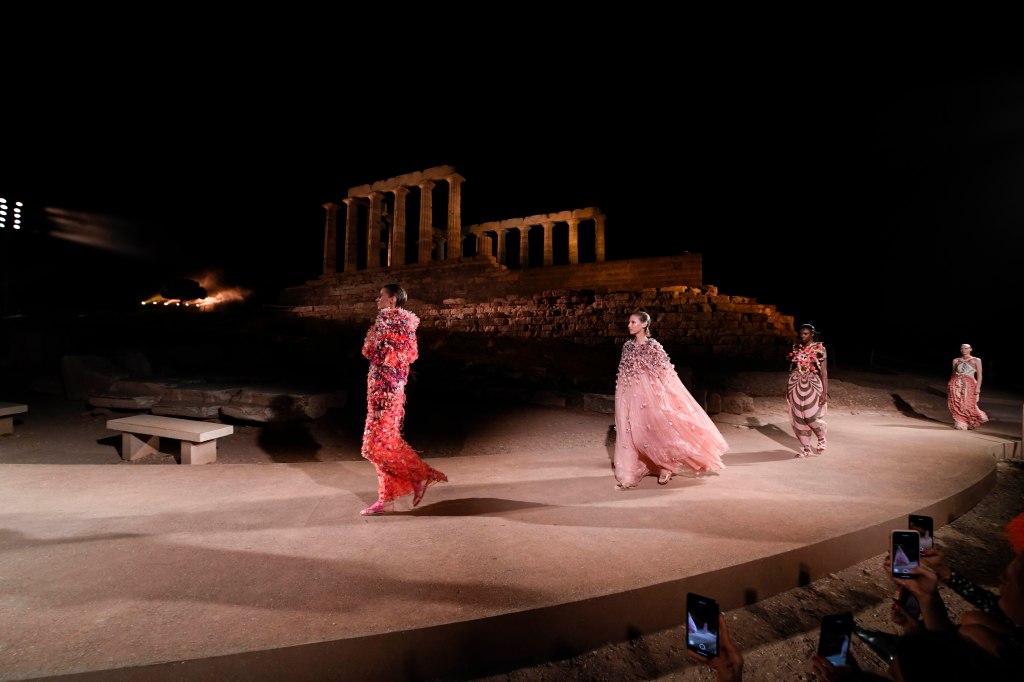 Instead, when it comes to the more commercial part of her business she is looking at developing her new Mary Mare resort line further and doing “dedicated boutique pop-ups” around those collections, which feature more size-inclusive, fuss-free silhouettes, as well as lower price points.

“Mary Mare was important to me. It’s basically a collection you can wear on holiday or at a hot climate and it’s simply easy pieces, easy-to-wear prints in all-natural fabrics,” added Katrantzou. “It’s more democratic in terms of size and price, so it will open up our audience a bit and offer more direct-to-consumer opportunities. We can now do destination pop-ups. Instead of having a store that needs to fit in everything, you do something that’s place-appropriate and part of an experience.”

After 10 years of having fun with all sorts of different collaborations, from lending her prints to Victoria’s Secret lingerie and Adidas sportswear, Katrantzou is now also aiming to forge longer-term partnerships, particularly in the home and interiors sector.

“Because of my architecture studies, it’s something I always wanted to do. We have a huge archive of prints that can translate into home and it’s about being able to enter men’s and women’s lives, not just through their wardrobes, but through gifting or interiors objects they collect,” said the designer, adding that a partnership with a rug company is already in the works. 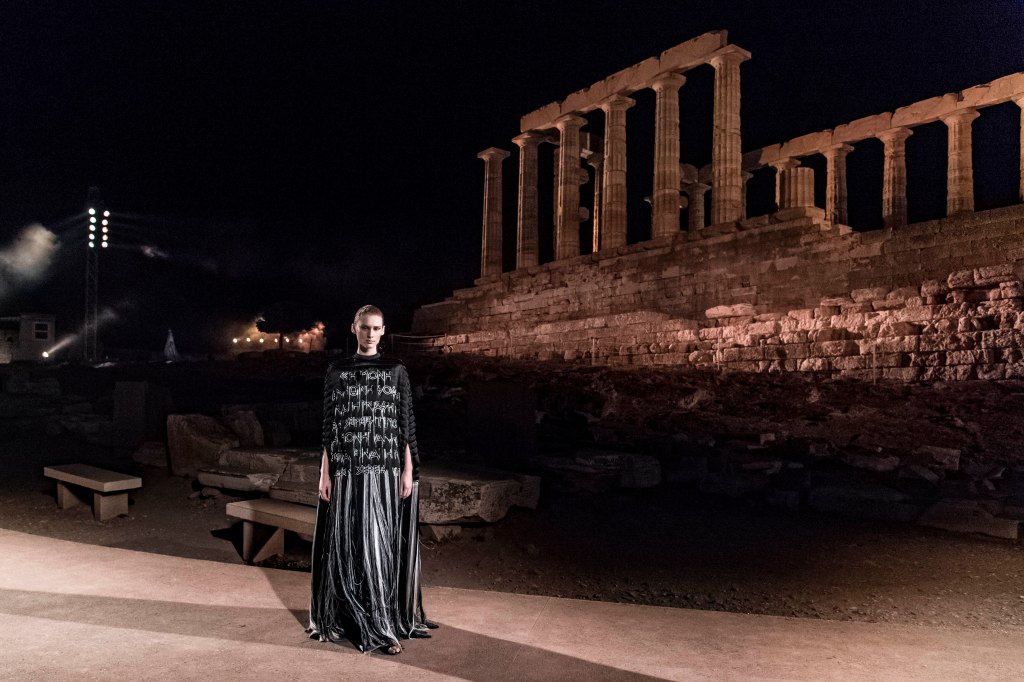 As she builds more confidence to forge her own path, Katrantzou is also rethinking the traditional show format — and the meaning behind it.

“I’m thinking now, will I just do a normal show next season? I’m not sure. When the show has a different purpose it makes your voice more meaningful. At this stage, after 10 years, it doesn’t inspire me in the same way to do a traditional show,” added designer, who said she would like to explore the opportunity of destination shows and collections every couple of years “in a way where it doesn’t become about appropriating a culture, but working closely with it, and being inspired by it.”

She said it all comes down to taking your audience on a journey and learning to stop ticking the industry’s boxes. “You have to pick and choose what you do instead of doing what you’re supposed to. It’s the only way to create newness and innovation because there’s so many of us it’s not possible for everyone to have the same path.” 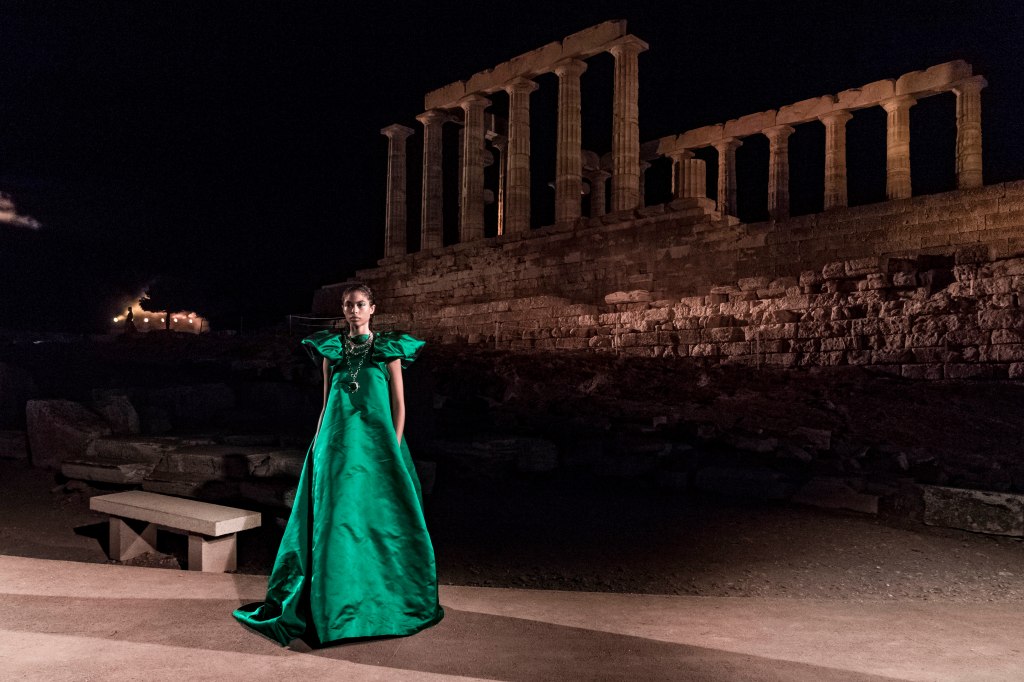 Realizing this next chapter would also require a fresh investment round, Katrantzou brought in Wendy Yu as a strategic investor last year to help build the brand’s presence in China. The designer is already in the process of talking to potential, new investors and raising a second round.

“Everything is currently at a standstill because the Temple of Poseidon show came in the middle, but we will continue when we’re back. It’s important to have strategic partners so we are looking to raise a second round, I don’t think you ever stop really. Doing it alone and having an independent brand is very liberating, but equally to achieve growth you need partners where your strategy and vision are aligned.”