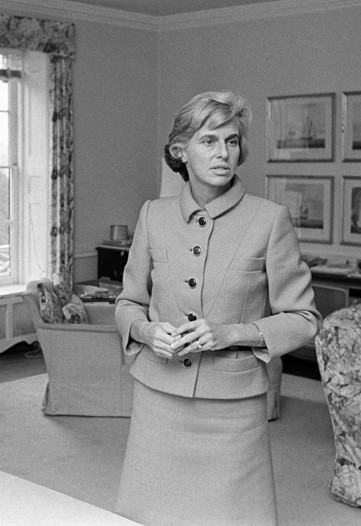 Under the cheery front-page headline “Her Friendliness,” WWD introduced its readers to New York Mayor John Lindsay’s feisty wife, Mary, in a free-wheeling interview at Gracie Mansion that ran Nov. 3, 1967. Long before Donna Hanover Giuliani and, more recently, Diana Taylor, made names for themselves as the independent significant others of New York’s most powerful player, Mary Lindsay — possessing “an abundance of energy and a refreshing sense of the incongruous,” according to WWD’s reporter — was multitasking on her husband’s behalf (case in point: she had her own office at the campaign headquarters in the Hotel Roosevelt during Mayor Lindsay’s 1965 campaign).

WWD clearly approved of Mrs. Lindsay’s segue from campaign spouse to the city’s first lady: “Mary is the same today…except she’s improved her taste in clothes and her hair is blonder,” the reporter wrote. With an affinity for Roger Vivier shoes and Valentino suits (she chose an orange one for the interview), Mrs. Lindsay admitted that her style upgrade made a dent in her budget. “‘My clothing bills have tripled since I got here.  It’s a real problem. It just gets too expensive,’ sighs Mary,” the reporter wrote.

Despite her interest in fashion and habit of being “not one to mince words,” Mrs. Lindsay frequently cut a traditional figure during her husband’s tenure (she also smoked, offering the reporter one before curling up on an armchair and lighting up). “The first thing is to try and run the house and have a family life as much like anyone else’s,” she explained. “It’s very important for John and for the children. If I’m rushing around and doing all sorts of little things, things sort of fall apart.”