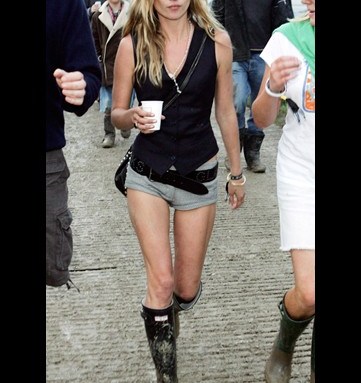 If you stage it, they will come. It was but one lesson learned from Woodstock. Sure, the masses came for the music, but they stayed for what quickly became a legendary event. It’s a lot for the music fests that have followed to live up to. Yet in the 40 years since Woodstock, festivals championing every genre of music and targeting every social niche have popped up, from the Erie Canal Soda Pop Festival (1972) to Live Aid (1985) to Ozzy Osbourne’s ongoing OzzFest and Sarah McLachlan’s female-friendly Lilith Fair (1997 to 1999). The list goes on. Here, a glimpse into some of today’s most popular festivals.

Glastonbury founder Michael Eavis hadn’t heard of Woodstock when he decided to mount a music fair at his family’s farm in 1970. Instead, he was inspired by the nearby Isle of Wight Festival and the 1970 Bath Festival of Blues. “It had all the best bands in the world — Led Zeppelin, Frank Zappa, Jefferson Airplane,” says Eavis. “It had a massive impact on me. I was just a Methodist, going to chapel in the village.” Eavis produced his first event several months later, rigging a stage from a tarp-covered farm trailer and charging a mere pound for admission. “It was a farmer’s attempt,” he says. “It was all tied up with string and stuff. It wasn’t a proper job at all.” What his first go lacked in sophistication, it made up for in “the charm of the farm,” as Eavis calls it. “We gave away cow’s milk for free.”

Thirty-nine years later, Glastonbury is one of the largest festivals in the world. More than 170,000 fans flock annually to Eavis’ Worthy Farm in Somerset, England, many camping on-site for six to seven days. And at 73, Eavis is still very much involved in creating the lineups. “I do write a personal letter and follow it up with a phone call,” he says. “I try to deal with the headliners myself.” As for that style arbiter Kate Moss, whose Glastonbury getup — Hunter Wellies and short shorts — launched a major trend when she was photographed traipsing the grounds in 2005, Eavis acknowledges that “young hippie girls are very well dressed.”

“It was unbelievable,” says Perry Farrell of the US Festival, a three-day concert held in San Bernardino, Calif., in 1982, which featured the likes of The Ramones, David Bowie and The Kinks. For Farrell, then a wannabe musician waiting tables in Los Angeles, attending the Steve Wozniak-sponsored festival was a revelatory experience. “I bopped around on LSD and I had this precognitive [idea] that I’d be up there one day and putting shows together, ” he says.

In the late Eighties, Farrell envisioned a roving multicity fair with music, art and alterna-culture (tattoo artists, pro wrestlers) — “like taking a Woodstock on the road,” he says — that would showcase his popular band, Jane’s Addiction, and others like it. And from its debut in 1991, Lollapalooza enjoyed a strong run as the venue for Nineties grunge and alt-rock. That is, until increased competition, industry corporatization and dwindling ticket sales led Farrell to shelve the concept after 1997. Despite several revivals, Lollapalooza didn’t hit its stride again until 2005, when Farrell and his new partners, Austin-based promoters C3 Presents, anchored the festival in Chicago’s Grant Park. Now, he says, “Our business has never been better, and the quality of our festival has never been better.”

That’s not to say Farrell doesn’t have issues with the state of music today. Take the dwindling drug culture, for example. “They’ve clamped down so much that the youth of today, they’re just not as experimental,” he says. “I know that drugs cause a lot of problems for people, but if I look at it as an artist and as a musician, I would tell you that music that does not have a trace of drugs in it, which is the pop music of today, it’s not very good. It’s not very creative.” He maintains that festival fashion, too, has declined: “The kids at the original Lollapaloozas did not look like [they] had just come off the street; you looked like you had been underground. Kids today, it looks like everything is prefabricated for them, even their look.

“I’m a little sad about it,” Farrell muses. “I’m supposed to be the guy who’s getting older and afraid of the youth, and I’m wishing that they would be wilder.”

As Perry Farrell says of his Lollapalooza partners and Austin City Limits Music Festival founders C3 Presents, “You know, in Texas, they like to do things large. But in Austin, they like to keep it freaky.” The result is this eclectic and bluesy fall festival, founded in 2002 in the Lone Star State’s most laid-back city. “We started doing our festivals from the ground up, not the top down,” says Charles Attal, one of the three Cs at C3 Presents, who got his start playing and later booking club gigs. “We always went for the meat of the lineup first. Then, if the headliners came in, great. If they didn’t, it was OK, too, because we knew we had 80 to 120 bands that were really cool and that were selling 1,000 or 2,000 tickets a night [playing] nightclubs.”

It’s an outlook that has earned the annual event, which owes its name to the renowned PBS concert series, a reputation as the go-to festival for indie rock acts on the brink of stardom. “If something’s popping at the club level, we want it,” says Attal, adding that a well-balanced lineup is as important as keeping the names fresh and new. “It’s like putting a puzzle together.”

“We wanted to do something that was a little different,” says Paul Tollett, president of Los Angeles-based concert promotion agency Goldenvoice, of Coachella. “[We wanted] something that had a heavy dance component to it, but also rock, indie rock and hip-hop — what everyone was listening to out here. And we wanted to make it a little higher-end.”

And as festival launches go, Tollett, who had previously promoted raves and other concerts in Southern California, lays claim to one of the most harrowing. He and his company launched Coachella mere months after Woodstock ’99 went up, quite literally, in smoke — bonfires and crowd violence were so severe, even MTV fled the premises. The event also lost $800,000, forcing him to shelve the project until 2001.

“It was kind of bad timing,” acknowledges Tollett, who grew up watching festival documentaries like D.A. Pennebaker’s “Monterey Pop” (1968) and Michael Wadleigh’s “Woodstock” (1970). “[I was nervous] that our show might get canceled. We were trying to sell tickets and people were saying that festivals were over. Like, ‘Look at what happened at Woodstock — this stuff should be outlawed.’ And even if it’s not outlawed, who would want to go to something like that?”

The show went on, albeit after a one-year hiatus. Coachella is now one of the best-known and fanciest festivals in the country, luring A-list musicians, Hollywood stars and the most fashionable fans out there to the desertlike Empire Polo Field in Indio, Calif., several hours east of Los Angeles.

Of all the Stateside music festivals, Bonnaroo’s four-day camping/music/hippie fest comes closest to capturing the Woodstock peace-and-love ethos. Situated on a 700-acre farm in Manchester, Tenn., Bonnaroo was created by Superfly Productions, a concert promotion company with roots in jazz and jam-band music, and AC Entertainment. Rick Farman, a partner in Superfly, explains: “We started to see bands that were attracting an audience that wanted to travel to see them play and to be at an event where a lot of different music was being presented.” They were right: In 2002, Bonnaroo’s inaugural year, the jam-band-heavy festival grossed $9 million. “[People are] coming for the music and all the activities we have going on,” says Farman. “But a lot of it is about living there for four days, meeting people, going to a farm and camping.”

Sound familiar? “Obviously there were other political factors driving that moment [at Woodstock],” Farman says. “But the [Bonnaroo] concept of trying to get young people to peacefully camp together and build their own sort of city out of nothing has a very similar feeling.” Thus, corporate presence is subtle and potential sponsors, thoroughly vetted. “We always come from the standpoint of, What are you doing for the fan? How is the fan benefiting from that particular company’s presence?” says Farman, noting that Garnier, which has a multiyear deal with Bonnaroo, has upgraded shower facilities on the campgrounds and provides free bath products and a hair salon, where attendees can get blow-outs and cuts — amenities one would have been hard pressed to find at Woodstock.