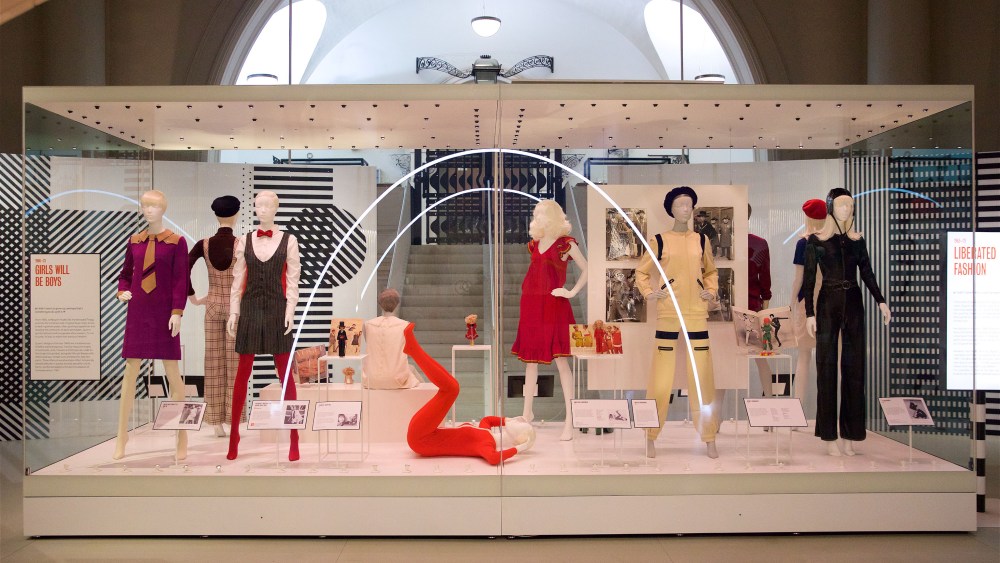 LONDON — With fast fashion under fire for clogging closets and landfills, retailers collapsing up and down the high street and “less-is-more” becoming an industry incantation, the Victoria and Albert Museum is reexamining the work of designer Mary Quant, who was all about marketing, selling and dressing the masses from the tips of their berets to their shrunken hemlines, right down to their go-go boots.

It’s been nearly 50 years since the V&A’s last Mary Quant show, and the retrospective that opens Saturday and runs until Feb. 16, 2020, underlines how much consumer society has evolved, and the extent to which Quant laid the groundwork for fast fashion, lifestyle branding and even streetwear trends. Mod queen Quant was about so much more than the miniskirt.

Not only did the designer embrace mass manufacturing and easy-care synthetic fabrics such as PVC, Crimplene, acrylic wool and acetate, she thought far beyond clothing, developing a license-heavy lifestyle brand that came complete with lingerie, tights, footwear, accessories, costume jewelry, color cosmetics, interior designs and a Daisy toy doll range meant to rival Barbie. After the lean and dreary war, and postwar, years when everyone had to “Make Do and Mend,” and with food rationing having dragged on until 1954, Quant was playing to the masses who were hungry for fashion, design, music, color — and fun.

Together with her marketing ace husband Alexander Plunket Greene and their business partner, the connected and commercially minded Archie McNair, Quant inked a host of licensing deals and collaborations, created subbrands and expanded into the U.S. with the J.C. Penney catalogue. The designer landed in the U.S. in 1960 marketing British fashion and eccentricity to the masses, four years before The Beatles came.

Those deals, and her thriving wholesale business, kept the designer so busy — and prosperous — that by 1970 she had shut all three of her Bazaar retail shops in London, on the King’s Road, in Knightsbridge and on Bond Street. Her dresses weren’t cheap, either, costing double the price of ones from Marks & Spencer.

The museum, which is exploring Quant’s work between 1955 and 1975, said it was the right time to take a fresh look at the designer, given the #MeToo movement, and the new momentum behind women’s rights.

“She has been sidelined because she’s not a couture designer,” said Stephanie Wood, who cocurated the V&A show with Jenny Lister. Wood said it was the right time to view Quant in the “post #MeToo era, given the fact that she liberated women from stifling rules and regulations.”

She could say that again: Quant’s heels were low and her bras and underpants lightweight and supportive, thanks to Lycra. She dressed customers in colored, textured tights — no garter belts there — and relegated painfully constricting girdles to history. “Foundation garments needn’t be surgical,” reads one ad for Quant’s Q-Form underwear range. “Get a birthday suit and be your own sweet self (minus six pounds).”

That’s not exactly PC in the context of today, but those words must have come as a relief to the teenagers, students and young working women who had long been forced to stuff themselves into thick, elasticized underpinnings to please the male gaze and conform to convention.

Quant, a graduate of Goldsmiths college, part of the University of London, also encouraged her customers to take their fashion cues from one another — rather than from their mothers and grandmothers — and dress to please themselves.

According to cocurator Lister, the exhibition has been designed to show how Quant and her brand “connected with her customers.” In this social media-saturated age, creating a loyal and engaged “customer community” has become a holy grail for brands and retailers. Quant knew that instinctively.

The V&A show has been built partly around those early adopters: Last July, the V&A did a call-out on social media with a “WeWantQuant” campaign to collect rare Quant garments. They received more than 1,000 responses, whittling them down to 35 looks from 30 women, including a short dress with a frilled neckline and sleeves, and rainbow lineup of A-line PVC raincoats and capes. All 35 items are on display with charming personal stories and photographs.

The bulk of the show was drawn from the archive of Mary Quant, who turned 85 earlier this year and who eased out of the business after selling Mary Quant Ltd. to Japanese investors in 2000. Those investors would later roll out branded stores in Japan and internationally, and put much of their money behind the color cosmetics business.

Quant remained a consultant to the business, and during a 2003 trip to open branded spaces at Henri Bendel told WWD: “Fashion rules are gone. The mini has evolved. It is infinitely renewable. Although it is simple, it is a very strong look.”

There are many minis in this show, with one display charting Quant’s rising hemlines as the years go by. “It gets to peak mini in 1966,” said Wood. Elsewhere there are perky Banana Split dresses with ring-pull zip fronts, short-sleeve wool or jersey ones with acetate linings for slide-on, slide-off comfort, and other, printed styles with cascading ruffles down the front.

The designer also took the radical step of producing tailored trousers and suits, in wools meant for men’s wear — which she used to buy at retail from Harrods and then dye in bright colors. She stretched that men’s wear aesthetic into gray tweed dresses with tops like suit vests, and made blouses with oversize neckties, always poking fun at convention and looking to unleash female power.