BOSTON — Two years ago, when activewear buyer Roger Taylor joined J.C. Penney Co., the small section looked perpetually "like a clearance sale," he recalled. Some 15 brands fought for space on eight racks, causing a jumble of fits, styles and... 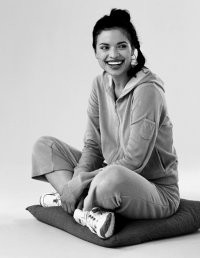 BOSTON — Two years ago, when activewear buyer Roger Taylor joined J.C. Penney Co., the small section looked perpetually “like a clearance sale,” he recalled. Some 15 brands fought for space on eight racks, causing a jumble of fits, styles and colors. It was turning in the worst performance in the women’s department, but Penney’s management had an inkling the category was due for a resurgence.

“We knew elsewhere it was starting to be a hot-trending area and we needed to cover it in a better way,” Taylor said. “We hired design teams and a sourcing team to focus on activewear and to go after a younger customer. At the same time, we cut back from 15 brands to four.”

The Plano, Tex.-based retailer’s timing was ideal, catching the active-casual trend on the upswing and meeting its customer with a clean, focused assortment. The presentation now consists of Adidas, New York Laundry and St. John’s Bay, a private label that is about 70 percent of the volume, according to Taylor. The department soared ahead of sales plan and the average of 12 fixtures per store will double to 20 to 25 for fall.

While terry hoodies and drawstring pants are a dime a dozen these days, mass retailers aren’t planning to back off. They contend the trend fits with the national yen for ease, that it is perfect for a mass audience because it flatters a wide range of figures and ages and that it has enough fashion momentum to stay fresh.

Mass retailers are paying attention to the look’s fashionable side: cargo pockets, satin trims, raw edges, snaps and motocross-style “kissing zippers” crops. Textured fabric like waffle and looped terry are among the updates expected in stores in coming months.

The Freestyle by Danskin bodywear collection hit Target stores 12 months ago. Dispensing with its usual test strategy, the retailer opened all doors immediately and has boosted the stockkeeping unit count since, according to Danskin chief executive officer Carol Hochman. The collection, produced by New York-based Jacques Moret under license, is fashion-forward, with Asian-inspired embroidery and colors like rust, cognac and harvest gold.

Spurred by strong sales of the cover-ups, Freestyle will expand to loungewear in April. This collection will push more sportswear-influenced styles, using fabrics such as corded velour, poodle sherpa and baby waffle.

Activewear is “huge” for Kmart, said Kathy Douglas, who oversees women’s trend and product development for the Troy, Mich.-based retailer. “Active looks and influences can be seen in all of our brands — from Joe Boxer to Jaclyn Smith.”

Although finances remain tight for the bankrupt retailer, the company believes enough in the category to invest heavily in promoting Joe Boxer lifestyle loungewear. Vibrant, high-energy TV commercials underscore that casualwear can have personality, not just be something mundane in which to sweat or snooze.

Active-casual is “a segment Mervyn’s is looking to grow,” said a spokeswoman for the Hayward, Calif.-based chain. Pursuing its “big brands, small prices” strategy, Mervyn’s stocks Nike, Reebok, Adidas, Jockey, Essential Gear by Vital, yoga-inspired line Lotus and Cheetah, its private label. The retailer will add to this brand buffet for fall with Russell Athletic and Gloria Vanderbilt.

One of the reasons active-casual is so appealing is “it’s no longer so masculine as it was five years ago, when we were all wearing basic sweatpants,” the Mervyn’s spokeswoman said. “It’s about fun and casual, but at the same time, looking pulled together.”

Sears, like most mass retailers, moved back into activewear in 2001. The store carries Reebok, Avia, Everlast and Classic Elements, and has begun carrying Lands’ End yoga pants and French terry separates, which were catalog bestsellers. Drawstring shorts and Reebok’s side-stripe Raccula pants are flying out, the spokeswoman said.

They’ll add active-casual pieces to the Covington house brand, a mid-priced product range, in the fall.

The trend is “very positive,” said a spokeswoman. “It’s about apparel that you can lounge in, run errands in or work out in comfortably because it moves with you.”

Kohl’s Department Stores, which opened 28 stores in California on March 7, is using active-casual merchandise as one of its main draws. The retailer added 50 percent more styles in California doors and racked the goods at store entrances.