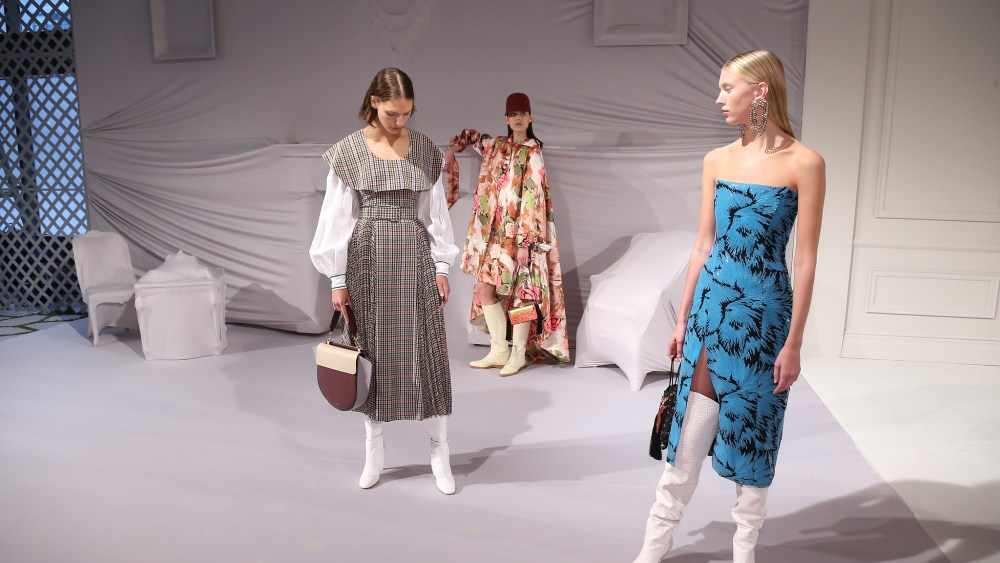 It’s been four years since Matchesfashion.com began staging seasonal press days in various cities and markets to present its buy to press, influencers and in some cases clients, with varying degrees of fanfare. For the most part, the presentations have featured looks and exclusives on static mannequins or racks, though in 2016 the online retailer took over the WOM Townhouse in Manhattan’s SoHo for a private press day, and then opened it up for consumers — essentially a pop-up — for a weekend of programming and previews of the site’s merchandise. Last year the company did something similar, hosting a series of “In Residence” programs in New York, Paris and Los Angeles that included industry and consumer-focused events, conversations with designers, editors and even a florist demo.

For fall, Matchesfashion.com changed it up again, with a two-hour live presentation featuring 40 models — 20 female, 20 male — in New York on Thursday. The models were arranged in vignettes in an open space at 100 Sixth Avenue in SoHo and styled in multibrand looks, many of them exclusives, giving the event the feeling of a fashion week installation rather than a retail press day. The company flew in international press as well as influencers and customers for the occasion, as it will replace the multicity press-day road show of seasons past, although there will be a similar event in the summer held at Matchesfashion.com’s new London townhouse at 5 Carlos Place.

Casting and styling 40 models and flying in editors, influencers and clients for the event is a big investment. It’s not a model typical of many retailers, online or bricks-and-mortar. Matchesfashion.com sees the event as an opportunity to create content for its various digital channels while engaging with press. “Storytelling is very much part of our brand DNA and we felt that this season it would be interesting to move on from the static presentations,” said Matchesfashion.com’s chief executive officer Ulric Jerome. “We are producing a wealth of content in New York including a look book, behind-the-scenes imagery, social editorial and main fashion shoots for our weekly magazine The Style Report.”

“It’s an opportunity to create original content that we can then use across all of our different platforms, whether social, video, daily content on the designer’s landing page,” said Jess Christie, chief brand officer of Matchesfashion.com. “Because we do work with so many new designers and do so many collaborations, the key purpose has always been to introduce the press to these brands right from the beginning and start the storytelling process. We feel it’s almost our responsibility to make the relationship between the designers and the press and obviously, ultimately, the customer.”

Some of the new women’s designers and collections featured in the presentation included Germanier, a Swiss label; Kwaidan editions, which made the short list of the LVMH Prize; Colville, by Lucinda Chambers and former Marni designers Molly Molloy and Kristin Forss, and Giuliva Heritage. For the first time Matchesfashion.com will carry Raf Simons for women, as well as Wales Bonner. There were exclusives with Halpern and looks from designers including Matty Bovan and Richard Quinn.

Matchesfashion.com’s women’s and men’s buying directors, Natalie Kingham and Damien Paul, respectively, were on hand to talk through the designers and looks, and there was a food installation by Laila Gohar. Meanwhile, the company had its in-house content team there to shoot a digital look book, create videos and live-stream the event on Facebook Live.

“We’ve always been a company that believes in relationships with people,” said Christie. “For us, the biggest sort of brand marketing has always been these relationships and storytelling opportunities rather an ad campaign, which we’ve never done. We need to do something that’s more engaging.”

An estimated 250 editors attended the event and each left with $200 gift cards.