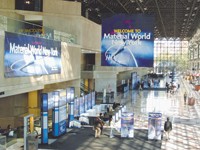 Fabric fairs point to growing numbers as a sign of a strong domestic textile market.

NEW YORK — The size and strength of the American market continues to fuel optimism among organizers of domestic textile shows, and is enticing newcomers to enter the fray.

German trade show organizer Messe Frankfurt is hoping a biannual version of its Texworld show will have the same kind of success here that Texworld Paris has enjoyed over the years. In its most recent four-day run in February, Texworld Paris drew some 688 exhibitors and more than 17,000 buyers.

Texworld USA, although a much smaller event, has already exceeded organizers’ expectations. When Messe Frankfurt announced plans for the show in February, David Audrain, president of Messe Frankfurt’s U.S. business, said approximately 100 exhibitors were projected for the first effort. By April, however, the company announced that additional exhibition space at the Penn Plaza Pavilion, where the event will be held July 11-13, had been obtained to accommodate increased interest from exhibitors. At the time, 110 exhibitors had confirmed their participation. That number has since ballooned to more than 150, according to Daniel McKinnon, vice president of North American trade shows at Messe Frankfurt.

“The U.S. remains very strong and interesting for people who are exporting to this market,” said McKinnon.

Messe has partnered with Lenzing Fibers and will incorporate Lenzing’s Innovation Asia show, which has been running out of a second-floor gallery space here for the past five years.

“We’re bringing a very strong brand that’s done well in Europe to a perfect spot,” said McKinnon. “Paris and New York are the fashion capitals of the world, and we’ll bring our same concept from Paris to New York. We’ve gotten tremendous feedback.”

McKinnon also believes the show will fill a void created by the departure of the International Fashion Fabric Exhibition, which had its last showing in May 2005. McKinnon hopes to avoid the fate of IFFE by limiting exhibitors to those that will offer the most value in terms of quality and service to buyers.

“We’re trying to offer the world — opportunities from A to Z for the buyers,” McKinnon said of the exhibitor list, which includes mills from 17 nations. McKinnon concedes that the majority are from Asian countries, including India, but that the show will also have mills from the Czech Republic, Ukraine, Israel, Turkey and Brazil.

Texworld USA will take place in July and January, and will focus on cotton, denim, embroidery, fibers, functional fabrics, knits, lace, linen, prints, silk, wool and accessories. Like its sister event in Paris, Texworld USA will cater largely to mass retailers and middle-market manufacturers. McKinnon hopes the show will attract 2,000 buyers over the three-day event.

The Turkish Fashion Fabric Exhibition will be returning to the Grand Hyatt New York for the 10th edition of its show, July 11-12. Ahmet Oksuz, a committee board member at the Istanbul Textile & Apparel Exporters’ Associations, a group of 28,000 manufacturers that organizes the event, said he expects approximately 40 mills to exhibit and between 1,000 and 1,500 buyers to attend.

The Turkish textile industry has been hard hit by lower-priced competition from Asian mills. The sluggish European retail market and high taxes on workers’ wages have added to the woes. An estimated 40 yarn factories closed in 2005 and at least 100,000 workers lost their jobs.

Unable to compete with China’s manufacturing might, Turkish mills have sought to reposition themselves as producers of high-quality fabrics that have the advantage of being close to the European market. Focusing on producing fabrics for the higher end of the fashion spectrum translates into higher costs, but Oksuz believes Turkey is still competitive.

“Price-wise Turkey is not the cheapest, but we’re not the most expensive,” said Oksuz. “We are in an acceptable range.”

Oksuz is also seeing buyers return to Turkish mills after finding inconsistency and poorer quality with cheaper Asian mills. “In the past three years especially, [buyers] have focused more on the cheap prices, but they have realized that this is not the only key,” said Oksuz. “They realize to be the cheapest is not the solution.”

“In the beginning, the companies were only coming and presenting the collections at the show,” said Oksuz. “Most of the companies have seen an establishment in New York is very necessary. The shows have helped them see that having an office and personnel here works.”

Direction, the textile design show that will run at the Penn Plaza Pavilion Aug. 1-3, has steadily experienced growth since its first fair six years ago. Lisa Mainardi, producer of the event, said 14 exhibitors attended the first show. This year, however, a dozen more designers have signed up and pushed the number of exhibitors to more than 100.

“We’re totally maxed out,” said Mainardi. “We haven’t been exclusive, because we had room, but we will have to be a little more exclusive going forward.”

Seminars have become a major facet of Direction, with 20 sessions scheduled to take place over the course of the show. Although buyers may want as much information as they can get about the trends for upcoming seasons, Mainardi has noticed that they don’t immediately act on that information.

“Our forecasters will sell the spring colors in January, but people won’t start using them until April,” said Mainardi. “They want the info, and they’re holding on to it, maybe to see that they’re on the right track.”

Mainardi has worked with forecasters and exhibitors to produce a mini magazine that buyers can use as a reference for upcoming trends. The pamphlet also helps some of the exhibitors advertise their services. During the show’s last run in January, 11 companies participated, resulting in a 40-page pamphlet, Mainardi said. More are expected to participate in the August edition.

Attendance at Direction has also been on the rise, fluctuating between 2,400 and 2,500 people in recent years. This year, Mainardi expects between 2,500 and 2,700, and she projected the show is on pace to top the 3,000-person attendance figure soon.

Although attendance appears to be on the rise, Mainardi said exhibitors are working harder to make their sales, as buyers have changed the way they purchase.

“[Buyers] used to go and buy a ton of stuff,” said Mainardi. “That has changed. Now they’re buying only what they need.” As a result, said Mainardi, exhibitors are selling smaller quantities, but may get additional orders from the same buyer in subsequent weeks. “They’re buying more carefully, which I think makes it harder for the studio.”

Material World will return to the Jacob Javits Convention Center for its second New York show Sept. 26-28. Tim von Gal, president of Material World and a partner with Urban Expositions, its organizer, said the show’s first run was a success, despite having only five months to bring it together.

“Now that we are no longer a freshman and have the experience behind us … we’re looking for a show that could easily be twice as large as our first show, with a real comprehensive international representation as well,” said von Gal, who expects to have 400 companies exhibit.

“The great challenge any company faces when they start playing on the international stage is to make sure they are technologically capable and ready to meet the needs and demands of domestic brands,” said von Gal. As a result, roughly 20 percent of Material World’s exhibitors are technology providers. The goal, he said, is to give both fabric producers and buyers the opportunity to find new systems that will allow them to interact with greater speed and efficiency.

Buyers are increasingly interested in hearing about sourcing opportunities outside of Asia as well, according to von Gal. Many are looking for small domestic manufacturers or mills located in Central and South America to provide rapid response.

“As much as we hear about the importance of sourcing from Asia … there is still a very strong call for us to make sure we’re providing a range of suppliers from around our region as well,” he said.

European Preview is scheduled to take place July 12-13 at New York’s Metropolitan Pavilion and will give buyers a first look at winter 2007 offerings that will be on display at the Première Vision show in Paris.