Material Girls: The Stars of ‘The Beautiful Life’

Despite Mischa Barton's hospitalization, the new CW show "The Beautiful Life" will go on. 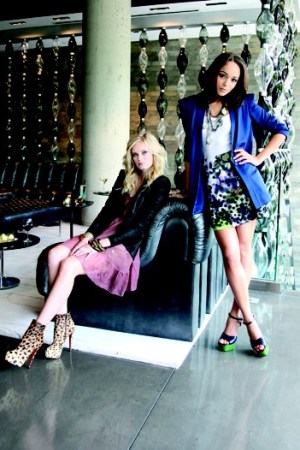 The show must go on.

And according to the executive producers of the highly anticipated CW series, “The Beautiful Life,” it will, despite star Mischa Barton’s recent well-publicized hospitalization. “We are happy to report that Mischa Barton is doing well and excited to start work, as we all are,” Mike Kelley and Karey Burke wrote in an e-mail to WWD on Monday. “Production for ‘The Beautiful Life’ will begin on Friday, July 31.” The e-mail also noted Barton is expected on set on Aug. 3.

Real-life intrigue aside, the show’s other stars were plenty enthusiastic at a shoot for WWD that took place the day after the Barton news broke. “I don’t know what’s going on. I hope she’s OK,” Sara Paxton offered before turning to the topic at hand, her own role in the show, and the day’s shoot, which included a sequin, animal-print Elise Overland cocktail dress and studded Cesare Paciotti booties. “I love myself in this!” she squealed while looking in the mirror. “I’m so cool! I love myself!” The edgy look was a departure for the pretty blonde, 21, who describes her everyday uniform as “grunge-meets-grandma equestrian,” but then again, she was expecting to undergo a major fashion transformation for “The Beautiful Life.”

The show chronicles a group of models as they rise and fall in the international fashion arena and, much like in the real world, outrageous drama will be as much a part of the story lines as fabulous duds. It’s the creation of Ashton Kutcher and Kelley of “Swingtown” and “The O.C.” fame, and inspired by the real-life modeling experiences of Kutcher and model-turned-writer Adam Giaudrone. “It’s about the struggle,” said Kelley. “These aren’t privileged people who have money or are trying to win a contest on a reality show. These [characters] are kids who don’t have a lot of opportunities outside of their looks, and they are trying to parlay whatever success they have into an actual future.”

Among these fictional models are Sonja Stone, Raina Collins and Marissa Delfina — played by Barton, Paxton and Ashley Madekwe, respectively. Not surprisingly, the characters’ style choices mirror their spots in fashion’s hierarchy. “Each girl is at a different level in her career, so the designers she has access to tells us what her experiences are going to be in the industry,” said costume designer Tom Broecker, whose credits include “30 Rock,” “Saturday Night Live” and “In Treatment.”

For Sonja (Barton), a supermodel who has returned to the fashion scene after a mysterious disappearance, that means a rocker-chic look. To wit, she’s often seen in skinny jeans, leather jackets, washed T-shirts and biker boots culled from the likes of Azzedine Alaïa, Roberto Cavalli and Balmain. “I looked to Kate [Moss]” while developing the Sonja character, said Kelley, who worked previously with Barton on “The O.C.” “[Kate] was abandoned and then re-embraced after the cocaine photos and rehab. Her story is one of resurrection like the phoenix.”

Raina, on the other hand, is a newcomer with a softer, all-American style, who makes a splash closing the fall Zac Posen show (Posen actually does a cameo in the pilot episode). “Raina is romantic and whimsical,” said Paxton, who previously starred in “The Last House on the Left” and “Sydney White.” “She loves flowy dresses, boyfriend blazers and men’s wear shoes. She’s not like the other girls; motorcycle boots are as edgy as she gets.” “Raina almost has a little girl-like quality,” added Broecker. She mixes European labels such as APC and Isabel Marant with contemporary American designers like Phillip Lim and Rebecca Taylor.

The ambitious Marissa, who is still trying to find her place within the modeling stratosphere, is the most avant-garde of the group. “She’s very adventurous,” said Madekwe, known best for her role as Bambi on Showtime’s “Secret Diary of a Call Girl.”

“She wants to be different. Whether it’s a Michael Jackson-inspired red leather Alexander McQueen jacket or sky-high, Louboutin ankle boots, anything goes. She’s just never going to be in skinny jeans.” Befitting her sassy, sexy personality, Marissa will flaunt pieces from designers and firms known for their body-conscious styles, such as Altuzarra and Preen. “She’s the one in the red dress when everyone else is in black. She will always stand out,” said Broecker.

To gather all of these looks, Broecker turned to magazines like W and British Elle for inspiration, and scoured the latest collections on Style.com. His fall favorites included Givenchy couture and Rodarte, and he hopes to include them in looks for upcoming episodes.

Like their costume designer, Paxton and Madekwe are going through a crash course themselves. “This is the first time I’ve actually met people in the industry or worn designer clothes,” said Paxton. “I have never even been to a fashion show. I just can’t even believe I get to live this life without actually living it. I’m superexcited to wear awesome clothes and meet amazing people. I knew nothing except for buying magazines at the grocery store.” Madekwe, who was drawn to the series because of its emphasis on fashion, had only been to graduate fashion shows in London, but was a voracious fashion magazine consumer. “I read every magazine, even the ones from France and Italy,” she said. “I don’t even care if I can’t understand them. My bag is full of a bunch of pictures that I’ve ripped out.”

Fittingly for both actresses, their own sartorial fare has changed with exposure to the series. Just like Raina, Paxton is also finding her fashion footing. She prefers a more eclectic style and mixes high-end labels such as Chloé with fast-fashion labels including Topshop. On the set of this shoot, she shrieked over tougher pieces, including a jewel-encrusted Tom Binns skull necklace and leopard-print Louboutins, which she said are “like Jesus.”

Like her character Marissa, Madekwe, for her part, is a bit more fashion-forward. She prefers Alexander Wang, and declares herself the ultimate bag lady. “I have more Balenciaga handbags than one person should own,” she said. “I will always sacrifice clothing for the bags.” However, she was intrigued by an architectural corset minidress by young designer Frank Tell. Overall, Madekwe is loving that her relationship with fashion will change as a result of “The Beautiful Life.” “I hope,” she said, “that we become better friends than we already are.”