Dressing Professional While Pregnant Is Harder Than It Should Be

A new maternity brand from two experienced retail execs wants to be the go-to option for millions of working, pregnant women out there.

Courtesy of Superkin/Photo by Blair Heagerty

Women have been more than half of the workforce in America since the late Seventies, but maternity wear has remained oddly steeped in ideas of what pregnant women should be doing, namely just being pregnant.

But that’s not the typical reality of modern pregnancy. Women work hard while pregnant, with only 10 percent of the 70 percent of those who continue to work doing so part time. Nearly all women also work the entirety of their pregnancy, according to Census Bureau data. So it was for two women, both with years of experience working in fashion, online retail and logistics, who felt they had few options of what they could buy to wear while pregnant and in a work environment.

“When we were in our mid-30s, starting to have kids, it was a record scratch moment of wait, why is this category so dismal?” recalled Miriam Williams, cofounder of new maternity brand Superkin with longtime friend Tara Henning. Williams started her career in merchandising at Coach before working at Louis Vuitton and J. Crew in New York for several years and most recently working in San Francisco for e-commerce logistics company Narvar. With all of her experience in and around retail, Williams was particularly surprised at the dearth of maternity choices for women that were in need of professional options. “There are so many incredible retail experiences now, but nothing in this space.”

Henning also worked at Louis Vuitton (where she and Williams met) and Narvar, with a stint in e-commerce for Walmart, and while trying to shop for clothing while pregnant realized that retailers and brands “view maternity as a throwaway category.” Since starting Superkin only a few months ago, she’s also noticed a general lack of understanding from merchants about the maternity space and what women actually want and need to wear when it comes to working while pregnant. When Destination Maternity filed for bankruptcy late last year, it chose to partially blame its long-suffering business on lower birth rates in the U.S. despite the decline being marginal, down only 2 percent in 2018.

“2018 was the first year that more women in their 30s had kids than women in their late 20s and now 70 percent of moms are in the workforce,” Henning explained. “It’s a very different customer than existed even 20 years ago.” 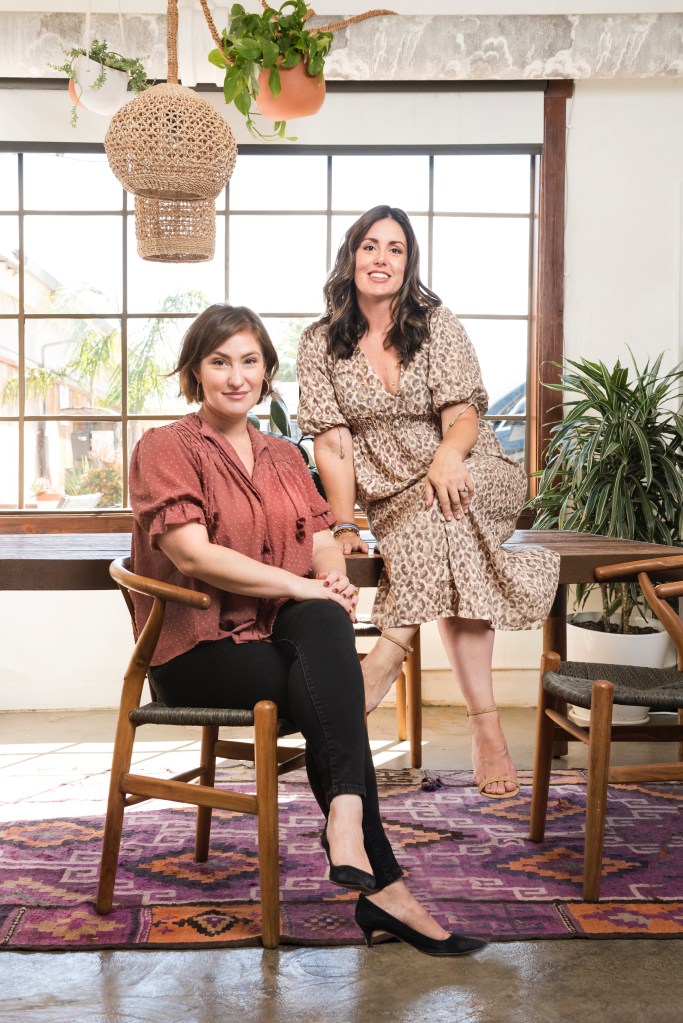 But maybe maternity wear is on a downslide because women today would rather make non-maternity fashion work during pregnancy? The famous and Instagram famous among us are posting pregnant selfies wearing Chloé, stilettos and bikinis, not maternity blouses, and even Vogue’s Anna Wintour is said to have worn only Chanel skirts with the waist unzipped while pregnant years ago. Henning said women who can make regular clothes work throughout a pregnancy are the exception and certainly not the rule.

“You have to have the style and time and be a little more savvy about where to buy things and then know what will fit,” Henning said. “Even for me, when I got pregnant I was like ‘Oh dear, this isn’t going to be fun.’”

Speaking as women who worked in high-level corporate roles throughout their pregnancies, they have a feeling they know a new generation of maternity customers well. With a focus on working women, they’ve also been successful in seeding out pieces to Silicon Valley executives and a few athletes. Alysia Montaño, an Olympic runner and national running champion who last year wrote an New York Times oped criticizing Nike’s maternity leave policy for athletes, wore Superkin early this year during a TV appearance, as did Meghan Duggan, captain of U.S. Women’s Hockey Team, during an NBC panel late last year.

Kate Whitcomb, chief executive officer of San Francisco-based Cocoon Health, is a fan of Superkin. Having worn it through her recent second pregnancy she called it “a game-changer for me from a wardrobe standpoint.”

“As the ceo of a tech start-up, I need to look professional but my maternity clothing needs to be functional and durable,” Whitcomb said. “I need clothes that look and feel good during presentations, networking events and long commutes. Somehow Superkin has found that perfect balance of function and style.”

Generally when shopping for maternity clothes, Whitcomb said she’s disappointed in the brands offering it, the selection and the quantity, often finding the few pieces she wanted to buy would be sold out in the sizes she needed.

“I found it hard to find anything that matched my regular style,” she said. “Maternity clothes seem to come in two styles: unflattering and sack-like or cutesy and outdated. I had a hard time finding basic, stylish pieces that I could mix and match and maybe even want to wear after the baby was born.”

“I underestimated how frustrating it would be,” Vardhana said. “It’s a brief period in someone’s life, so I think a lot of investment hasn’t gone into it.  And sadly, we live in a world where numerous women’s issues are overlooked or neglected. The fact that you are juggling a changing body, shifting hormones, while mentally and emotionally preparing for a whole new addition to your life is under appreciated. If clothing, which you have to wear every single day, can bring normalcy and comfort during that experience, it could be powerful.”

Williams and Henning have also surveyed more than 700 women, friends, friends of friends and acquaintances who’ve had children. Turns out, shopping for something to wear to work while pregnant, wanting to be comfortable but also professional and able to stand in a room of coworkers or clients with dignity intact or maybe even feeling better about themselves, turned up nothing of the sort.

“We got visceral responses from our survey,” Henning said. “These women are essentially forced to shop at Gap and Old Navy and Target, places they don’t shop for clothes normally.”

Williams and Henning have plenty of their own bad memories of maternity shopping. Henning recalled being pregnant with her second child, not feeling great and wanting something that would give her a boost of confidence — a role frequently filled by fashion non-pregnant women, too. She spent $130 on a top at Pea in the Pod (a subsidiary of Destination Maternity and part of its bankruptcy) and on first wearing the top to work was hit with the comment: “That’s such a mom top.”

“I was pissed but it was true; it was matronly,” she said. “And that’s why these maternity stores are struggling, no modern styles.”

For Williams, it was not only the overall styles she found available in maternity, but the quality. “I went into Seraphine with my mom and after crying in the dressing room I bought these bamboo leggings. They were soft, but they pilled immediately and basically fell apart. People aren’t investing in fabrics in this category.” 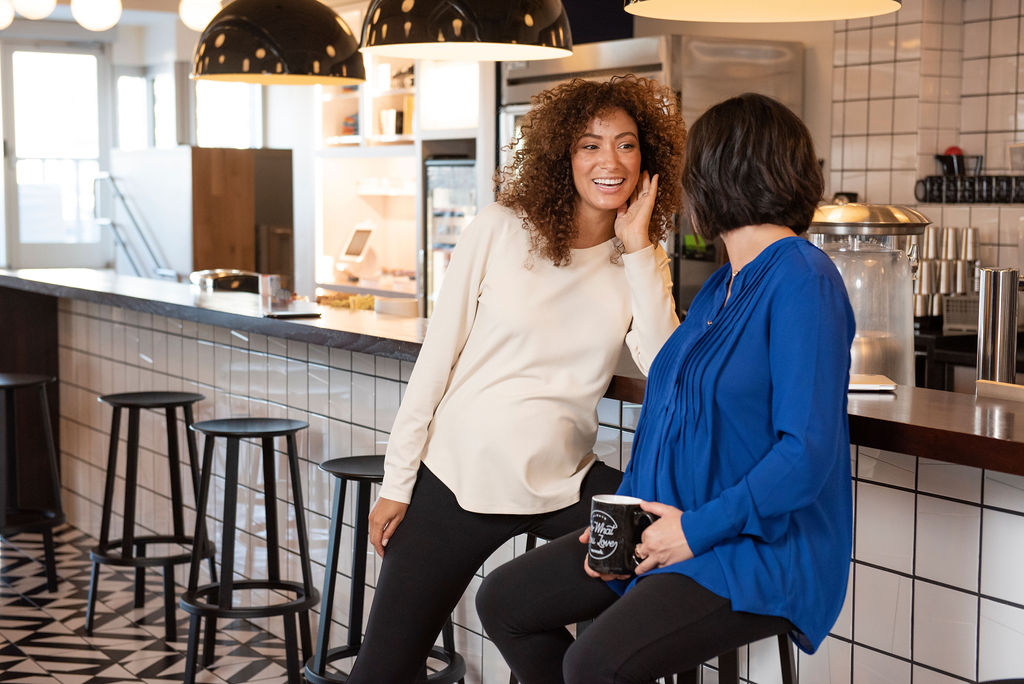 So Williams and Henning last year decided to start a maternity line, using their combined experiences and knowledge of the industry. They raised a small investment round of about $200,000 and are now part of an accelerator program through the Wharton School of Business. Williams and Henning are looking to raise a friends and family round of $500,000. Both women see the company as being a big part of the space for “new parent products,” estimated to be worth around $46 billion.

“Yes, we have to sit down as two female founders and moms and explain to investors that we’re creating a product specifically for women and sometimes people get uncomfortable, but things are starting to change,” Henning said. “We’re part of this new parent ecosystem.”

“We think of this as a mom acquisition company,” Williams chimed in.

Williams and Henning keep a slack channel now of all the terrible maternity wear they happen upon — muumuus and ill-fitting pants, spandex T-shirts with patronizing phrases like “I swallowed a watermelon seed” and “I like to think wine misses me, too.” With a year of research and a few months of a very soft launch with a handful of basic but professional and quality pieces available online, the cofounders are certain there is a lot of space to fill and the category is nothing more than an afterthought in apparel. Even for the big retailers that actually produce and sell maternity.

“We talked to designers and they said it, it’s an afterthought,” Williams said. “Some places take it on as a pet project but then it just goes away. It happened when I was at J. Crew and now Madewell is trying it, but I have friends who’ve bought the jeans. They fall down. It’s never really well executed.”

Superkin is working with a designer, a Gap alum, for the look of the pieces and a technical designer for the fit. They want to ensure that the brand is an easy solution to what is a sartorially trying time, not to mention an awkward physical and often emotional one.

“We’re pleasantly surprised by how much she’s buying from us,” Henning said of the current Superkin customer. “She’s not coming and just buying one shirt, it’s like ‘Thank god. I’ll but the whole capsule.’”

Williams said the average purchase order is more than $200 and the pieces per transaction is roughly three, even with only six pieces currently on offer. An additional capsule of four pieces is coming in May, and more will be added through this year as Williams and Henning get customer feedback and, of course, as time and money allow.

“We’ve seen double and triple growth month over month,” Williams added. “One of the things that’s also been ignored with this customer is she doesn’t have a lot of time and she probably doesn’t know what to buy.”

The hope is that Superkin will provide a solution to both problems for pregnant women, and maybe in the future the brand will be a single stop for all things maternity.

“We’re talking having a baby and working, not climbing Mount Kilimanjaro — it happens every day,” Henning said, bemused. “It’s really bizarre that this has been such an overlooked category.”