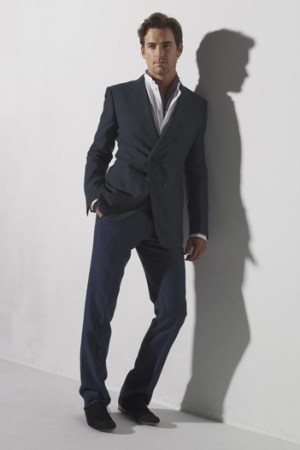 Matt Bomer exudes a certain mastery of self-control. On a Saturday afternoon dressed down in a Splendid Mills T-shirt, A.P.C. shorts and John Varvatos boat shoes so old “they’re molded to my feet,” Bomer maintains a sterling-straight face throughout the photo shoot for this story. (It helps that his face mirrors the kind of Greek aesthetic ideals that render any expression marble-worthy.)

“This is the most I’ve ever liked pleated pants,” he says, without a trace of mocking as he admires a pair by Gucci.

“I’ll do just about anything. I don’t do Jesus sandals,” he says, still poker-faced, when a pair is suggested and promptly whisked away.

The only time his unwavering features break is when the photographer suggests an existential directive for a shot.

“I’m going to stand here perched in my white loneliness,” he instructs Bomer to take as inspiration.

Cue actor cracking up before reclaiming his poise.

A mixed salad, an iced coffee and an Organic Avenue green juice later, Bomer is in relaxed mode, sartorially and otherwise.

“My compass is usually comfort. So if it looks nice and comfortable, I’m into it,” he explains of his unassuming off-duty style. “I’ve certainly learned that when you need to step it up, it’s fun to be able to do that with your own personal sense of style, flair and flourish.”

All are qualities of which his character, Neal Caffrey, would approve. Now in its second season, USA Network’s “White Collar” follows Caffrey, a big-time con artist who trades a hefty jail sentence for consultancy work with the FBI. Partnered with agent Peter Burke (Tim DeKay), Caffrey uses his forgery, art-heist and jewelry-stealing knowledge to help solve crimes while keeping the FBI and the audience in suspense as to whether he’ll return to this thieving ways.

“He is what you would expect on the exterior: hyper-confident, intelligent, charming, full of social graces. But underneath, he’s a three-year-old who doesn’t have a lot of impulse control,” explains Bomer. “That childlike quality to him was one of the things that really drew me to him and that I thought would be a fun duality to play.”

“Neal tends to act on the moment without thinking about the consequences, while Matt is more deliberate in his approach. He’s not an actor that simply throws his lines out there,” says Jeff Eastin, creator and executive producer of “White Collar.” “Everything he does has a purpose, and that is one reason why he can play an impulsive character like Neal.”

And he does so in some pretty spiffed-up duds, from Paul Smith, Calvin Klein and Simon Spurr suits to a recurring vintage fedora (his other less-fashionable accessory is a tracking anklet — he is an ex-criminal after all).

“It’s really how I slip into the character at the beginning of the day: once I have the suit and the tie and the tie bar, that’s when I really start to feel that character,” says the actor. “It feeds the sense of confidence that you have to have as a con artist.”

Also fueling his performance is a mélange of cinematic inspiration (he and Eastin were influenced by “To Catch a Thief,” “The Sting” and even a dash of Ferris Bueller), literature (Frank Abagnale’s “Catch Me If You Can” and Kevin D. Mitnick’s “The Art of Deception”) and some good old-fashioned Web surfing (“There was a lot of Wikipedia work going on at night in my apartment”). This season, they even brought in a real life ex-con to show Bomer the ropes.

“As great as it’s been to learn how to pick a lock or spot a fake gem or whatever the day may call for, the most interesting thing is to see how he maneuvers in the world and how he interacts with people,” says the 32-year-old. “Everything is so buoyant with him.”

Growing up the middle of three children in Spring, Tex., (his father is a former member of the Dallas Cowboys), Bomer was always working his artistic and athletic muscles. He played all manner of sports and, starting in sixth grade, spent hours in his room studying for acting competitions. His senior year, he was cast in a production of “A Streetcar Named Desire” at Houston’s Alley Theater and broke the news to his parents that acting was his chosen career.

“I sat them down and told them, ‘This is what I want to do, this is how I’m going to do it.…I’m going to audition for conservatories and then I’ll get an agent,’” recalls Bomer. “I guess they were kind of impressed with whatever pitch I gave them.”

He studied at Carnegie Mellon’s conservatory before moving to New York, where he did theater while keeping up a day job as a bellman at the Hudson Hotel. When that gig fell through, he tried television.

“A casting director on a soap had said, ‘If you ever want a job, call me.’ And I had been doing Shakespeare for the past four years. I’m not going to just jump onto a soap opera,” says Bomer, who did just that on “Guiding Light.” “I called him and I’m so glad I did.”

More opportunities came along, including a role in “Flightplan,” and on the TV shows “Chuck” and “Traveler.” He now divides his time between his home in Los Angeles and five-month “White Collar” shoots in New York.

And though he has no plans to put his newly gleaned criminal knowledge to practical use, he can’t help but note the overlap between acting and conning.

“To pull a good con, you have to do a lot of homework and research, you have to know your mark and you have to be able to project a certain sense of confidence in whoever you’re playing,” explains Bomer. “There are inherent similarities there.”