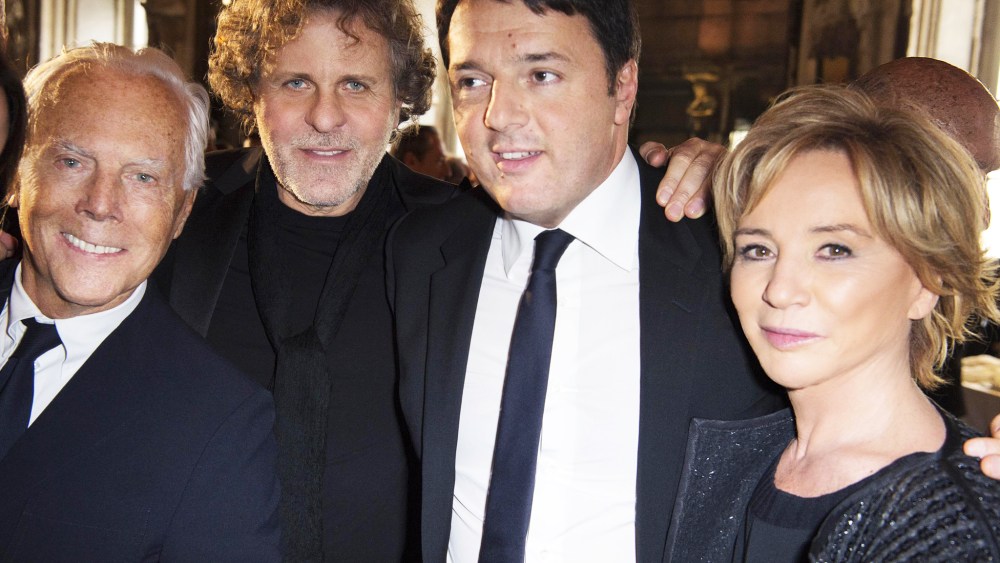 Never has a sitting Prime Minister inaugurated Milan Fashion Week and rarely have so many power players from the Italian industry gathered under the same roof. A lunch held Wednesday in honor of 41-year-old Italian prime minister Matteo Renzi saw Milan’s fashion elite reveling in what many describe as a new energy in the city and the sector. Exhibit A: Donatella Versace poured in a tight sage-green suit between Giorgio Armani, in a dark suit, Valentino’s Maria Grazia Chiuri and Pierpaolo Piccioli and Vogue Italia’s Franca Sozzani. Exhibit B: Tod’s chief Diego Della Valle sitting next to Prada’s Patrizio Bertelli, opposite Diesel’s Renzo Rosso.

“This is fashion, to speak to one another,” said Versace.

“There are few opportunities to spend some time together, our job requires evolution and revision, but when we do see each other, I see in our eyes the same thoughts, that we are happy to have walked this path, but it’s one of sacrifices and hard work,” said Giorgio Armani. A point the designer reiterated to the popular Renzi, who wove his way through the Sala delle Cariatidi, inside the city’s Palazzo Reale facing the Duomo, shaking hands, exchange a few words with designers and company chiefs. In conversation, Renzi asked Armani what the government could do to support fashion and the designer underscored the seriousness of the industry and the number of people it employs.

After a light lunch of lobster salad and pasta, the mayor of Milan, Giuliano Pisapia, confessed that he discovered fashion through this political role, underscoring how more approachable the industry is today, “less closed in the ateliers” than in the past and as a result opening up more opportunities to the younger generation.

Carlo Capasa, president of the Camera della Moda, praised Renzi’s “pragmatic and operative job. Italy is very different from a few years ago,” ticking off the association’s achievements, including his “Mission Impossible: creating a fashion committee where all associations sit together at the same table.” Capasa gave a shout-out to former deputy minister of economic development, Carlo Calenda, who was in the audience.

“Italy wants the future, it is hungry for it, curious about it,” Renzi said from the stage. “It’s strange that I am the first Prime Minister [to inaugurate Milan Fashion Week], but the important thing is that I should not be the last, that this can become a tradition.”

“We should never think that this is a divertissement for few,” he said, pointing to the “the faces of men and women, the talent and genius, the sweat” behind the industry statistics and numbers.

Renzi highlighted three issues, starting with Italy’s onetime fear of globalization. “This was seen as a menace or an enemy but it offers great potential. The world is asking for fantasy and beauty.” He pointed to the “extraordinary weight of the past in this sector,” remembering how Beppe Modenese, honorary chairman of the Italian Chamber of Fashion, recounted the early days of fashion and the first shows in Florence’s Sala Bianca. “I know how big the value of the past is, but we bring it to the future. The past teaches us what the future of Italy is and there is no nostalgia.” Renzi lamented the number of opportunities lost in the past to underscore the existing “extraordinary potential,” leveraging Italy’s manufacturing prowess. Fashion, he said, “brings richness and well-being, Italy’s characteristics. They say we will live longer, but the challenge is to speak of the quality of life and you [as an industry] teach us the direction. The time of pronouncements is over. This is the time of results and I believe fashion still has to write its most beautiful pages.”

Renzi also touched on the subject of terrorist attacks, which “hit our way of life – theaters, museum, schools. We should demonstrate what we can do, emphasize it. Italy’s come back after polemics and scandals, it’s a country we love and believe in the future. It’s our most important challenge.”

As a mayor of Florence first and in the two years since his appointment as head of state, Renzi has won the approval of the industry. “I am a fan, he is a very intelligent man. Yes, he’s interested in fashion but not only that, he is the right person for Italy at this moment,” said Ferruccio Ferragamo, chairman of the Salvatore Ferragamo Group.
Brunello Cucinelli said that Renzi had already helped promote men’s wear with his work with Pitti Uomo when he was mayor of Florence. “He’s going to do the same for women’s wear, I am sure. This is truly a new cycle for the country, it’s Italy’s Renaissance.”

Francois-Henri Pinault, chairman and ceo of Kering, was among prominent French executives in the room – and for good reason.

“We’re more an Italian company than a French company, employee-wise,” said the executive, estimating about 7,000 members of its workforce are in Italy out of a total of almost 39,000 worldwide. (By comparison, Kering has about 2,500 employees in France.)

Alberta Ferretti remarked on Milan’s renewed energy, reflected by the fashion industry. “It’s fundamental to be positive because without fresh energy you don’t create new situations.”

“This is great: The first time we get the government behind fashion,” enthused Laudomia Pucci, saying of Renzi: “He related to what we’re doing.…It’s more than just fashion shows: It’s a vertical industry.”

“It’s my favorite room in Milan. I love the decadence,” said Giambattista Valli speaking of the venue, the tables appointed with hedges, and tumbles of kumquats and crystals.
Young designers, some of whom have two fashion shows this week, were out in force despite the time pressures.

“We’re all sitting a little bit on pins and needles,” said Arthur Arbesser, who was awaited for fittings for Iceberg ahead of his signature show. “There’s a sense of unity here.”