Rifat Ozbek's job as creative director of Pollini's ready-to-wear collection keeps him hopping between Italy and his London home. 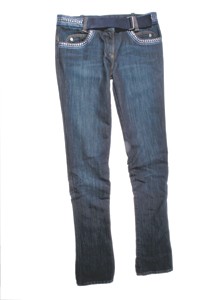 Rifat Ozbek’s job as creative director of Pollini’s ready-to-wear collection keeps him hopping between Italy and his London home. For his collaboration with Mavi on a limited-edition collection that will launch this spring, Ozbek added stops in Turkey.

“Our first meeting was at an airport,” said Elif Akarlilar, Mavi’s global brand manager. “I was going to New York, and he was coming from Italy and going to London.”

In that meeting, the two zeroed in on Ozbek’s inspirations for what would become his first full denim collection and worked out a time line that would allow him to be hands-on in creating and developing the line, from fabrics to fittings.

Rifat Ozbek for Mavi, a 30-piece collection, is the second project Mavi has undertaken as part of the brand’s 15th anniversary celebration. It also marks Ozbek’s first collaboration with a Turkish apparel brand. Ozbek’s design pedigree was more than enough to make him an attractive partner, but he also had a connection to Turkey that made him an appealing fit for Mavi.

Ozbek was born in Istanbul in 1953. He moved to England in 1970 to study architecture at Liverpool University before diving into a career in fashion. For the collection, Mavi looked to Ozbek to draw on his Turkish roots. The result is a line built around a Mediterranean theme, mixing the ideas of the sea and wind.

“We’re very similar,” Akarlilar said. “He has been a global player and has a Mediterranean origin that we like.”

The collection is built around three groups of products, including shorts, dresses, skirts, jackets and long gowns. A denim and linen capsule line includes jeans, trousers and miniskirts and uses a high-quality denim Mavi produced exclusively.

“His inspiration was the mountain breezes in the Mediterranean,” Akarlilar said. “[The wind] takes the waves and puts in different kind of blues.”

Ozbek was eager to work with denim and develop the line, Akarlilar said. She approached Ozbek in June and he began working on the concept two weeks later.

“He wants to explore more in denim,” said Akarlilar, who added that Ozbek traveled to Turkey for fittings and to work with Mavi’s team.

The project has Mavi’s management eager to do more with Ozbek and possibly other designers. The company is already speaking with Ozbek about doing another collection for next season.

“We would love to do this more,” Akarlilar said. “This was very encouraging.”