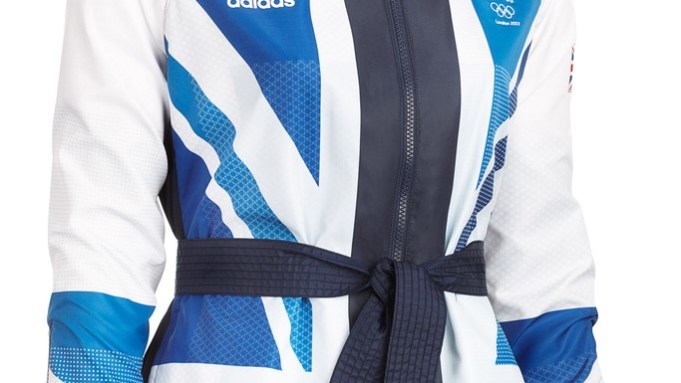 LONDON — Stella McCartney made history at the Tower of London Thursday as the first fashion designer to create the uniforms for Britain’s Olympic athletes.

McCartney and Adidas, the official sportswear partner of Team GB and ParalympicsGB, unveiled a series of environmentally friendly uniforms for Britons taking part in the 2012 Olympic and Paralympic Games.

McCartney, creative director on the project, and Adidas displayed performancewear for the more than 900 athletes who will be taking part in 46 different events in London this summer. The pieces, which have been engineered to suit the individual sports, all feature an abstract take on the Union Jack in blue and white, with red details.

“It was important for me to stay true to that iconic design, but also to modernize it and present it in a contemporary way. Ultimately, we wanted the athletes to feel like a team and be proud with the identity we created,” said McCartney in an interview.

Some 30 Olympians including heptathlete Jessica Ennis, swimmer Ellie Simmonds, and the triple-jumper Phillips Idowu showed off the uniforms during a launch event at the Tower.

McCartney has been working on the project for more than two years and has created training kit, presentation suits, footwear, and accessories in addition to the event uniforms.

The designer said creating the uniforms was a challenge.

“The athletes have so many different needs and disciplines, and the technology that Adidas uses can also be challenging: You can’t print over certain seams, for example, and the scale of what you are designing differs with each sport,” she said.

Adidas used materials including Techfit PowerWeb, which is designed to mirror muscles’ movements, and Climacool, which draws heat and moisture away from the body.

McCartney said she’s particularly proud of having added a dose of femininity to the women’s wear: Jackets are belted and gently flared at the waist, gymnasts’ leotards feature sequins, and hockey shorts are disguised as tiered miniskirts.

“In the past, I think the women were handed men’s jackets and that was it — the look was very masculine,” she said.

McCartney said the jackets for men and women all have detachable linings and ticker tape messages inside saying: “Only the best for the athletes.”

The collection also has its green credentials. McCartney said tennis player Andy Murray’s shirt is made from 100 percent recycled polyester, and the equivalent of 500,000 plastic bottles has been used for other fabrics and trims.

Replica ranges of the British team uniforms will go on sale next month, including soccer, tennis, cycling and swimwear.