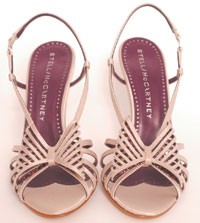 LONDON — Nylon, vinyl and techno canvas aren’t words that set the average luxury customer’s heart aflutter, but thanks to Stella McCartney, that may be about to change. The designer, famous for her love of animals and loathing of leather, has unveiled her first major accessories collection, a mix of man-made and natural fabrics with details such as heavy stitching, chunky chains, punk studs, and jet beading.

“I’m not trying to take over the world, but I do want to show that accessories can be made from a more ethical viewpoint — and be sexy and cool,” McCartney said in an interview Monday. “The myth of leather — that every bag and shoe needs to be made from it — needs to be broken down. It’s a bit caveman.”

McCartney also said she believes there’s a gap in the market for accessories made from non-leather alternatives.

“I don’t think it’s strange for a consumer to ask for a good-looking, non-leather handbag. It’s sad there aren’t 20 other fashion houses making non-leather products,” she said.

The highly textured, brightly colored collection features handbags, purses, luggage, shoes, belts and jewelry. It will launch for fall. Retail prices range from $95 for some of the jewelry to $1,595 for the satin, or moiré and canvas, embroidered shoes. Dollar figures have been supplied by the company.

The line will sell in the Stella McCartney flagships in London, New York and Los Angeles, in addition to select retailers, including Selfridges and Le Printemps, starting in June.

Handbags range in price from $195 for the nylon Golborne bag, trimmed in black ribbon or velvet, to $1,395 for the vintage-inspired Appaloosa, made from shiny, high-tech strop patent fake leather.

“A bag is as important as a shoe, a coat or a dress,” said McCartney. “Women rely on a bag to express themselves — especially in winter when we’re all covered up. It’s a statement piece that reflects a woman’s personality, and it needs to be both individual looking and wearable.”

To wit, McCartney said the bags all have inside compartments for keys, makeup, a wallet and phone. On the outside, the branding is subtle, and the logo is engraved on an antique-finished brass medallion. “I don’t think my customers want to scream about having a designer bag,” she said.

In tune with McCartney’s love of horses, the nine handbag styles have all been named after different breeds: Appaloosa, Dartmoor, Morgan, Brumby, Palomino, Mustang, Falabella, Pinto and Golborne.

Footwear, of which there are 10 styles, starts from $395 for the leopard print satin shoe. McCartney said she’s given her beloved high-heeled shoes new toe shapes, and addressed flat shoes.

“I’m like every other woman: I want a good flat boot for winter and a flat ballerina for summer,” she said.

Prices of bags and shoes are in line with other designer collections and, in some cases, they’re more expensive because of the material or treatment. “Often, the price that’s put on the skin of an animal is not that high,” she said.

Texture plays a major role across the entire collection, with materials such as velvet, soft patent, crackle patent, metallic vinyl, stonewashed denim or canvas, and techno canvas. Shoes and boots come in satin with glitter details, waxed canvas and vinyl.

Color, too, plays a big role in the new collection. There are deep clarets, cornflower and peacock blues, sea foam greens, and leopard prints.

In addition, there are 13 styles of belts, made from materials including chains, elastic, studs and velvet. There are three styles of jewelry made from precious metals including sterling silver, onyx, crystal and brass.

“The jewelry just evolved. We were playing with the details on the bags, and thinking, ‘Wow, that would make a great bracelet or necklace.’ I love doing jewelry, and I think these pieces really complement the collection,” she said.

The accessories line is produced in-house in Italy. As reported, Marco Bizzarri, chief executive officer of Stella McCartney, believes accessories will generate some 30 percent of the company’s annual sales in less than three years’ time. Accessories currently account for about 16 percent of annual turnover.

In an interview with WWD late last year, Bizzarri said the reasons for launching the accessories line are simple.

“Our customers have been asking for it. There is a huge opportunity for growth here,” he said. “We think we’re in a unique position, and we’re ready to exploit our strengths.”

McCartney admitted that creating non-leather accessories has been a challenge.

“It has a lot to do with the mind-set of the artisans themselves, who have a history of working with leather. And even when they’re making a canvas bag, for example, they’re used to it having a leather trim,” she said.

“Leather stretches, shrinks and is stitched in a different way, and often the machines they’re using are adapted to leather,” she added.

Animal-rights issues aside, however, McCartney said she hopes the non-leather element of the collection will be secondary to the style.

“Yes, non-leather is a point of difference for us, but I want people to buy this collection because they love it, because it’s cool, and because there’s a must-have bag or shoe,” she said. “For autumn-winter ’05, our thigh-high boots sold out, and I’m willing to bet that 90 percent of the customers didn’t even know they were non-leather,” McCartney said.

The company has rapidly been preparing for this collection. As reported, last year Stella McCartney reinforced its accessories team — poaching two Italians well known in the industry — in preparation for the launch. It hired Veronica Bertozzi as worldwide sales director. She was formerly the sales director of Iris, the Milan-based shoe licensee for labels including Chloé and Marc Jacobs.

The company also took on Caterina Seghezzi as product development manager. She was formerly fashion accessories coordinator for Dolce & Gabbana.