A spokeswoman for the designer, who is in town for Academy Awards festivities, confirmed she has signed a lease for her third store, an... 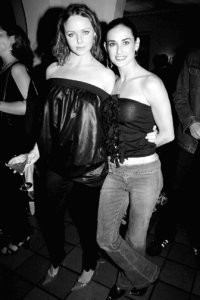 A spokeswoman for the designer, who is in town for Academy Awards festivities, confirmed she has signed a lease for her third store, an ivy-covered cottage at 8823 Beverly Boulevard in West Hollywood, which will open this fall. The freestanding building is a 3,000-square-foot, two-level space with a back parking lot that’s paved in bricks and surrounded by dense landscaping.

“The charm and the appeal and privacy of the rear motor courtyard will work well with her high-profile and celebrity clients,” said Chuck Dembo, partner at Beverly Hills real estate firm Dembo & Associates, who facilitated the lease.

The designer, on a short sabbatical “somewhere in California,” could not be reached for comment Tuesday.

McCartney’s camp said the building’s exterior would remain intact with some modern twists thrown inside. “She likes contrast and a paradox,” noted James Seuss, chief executive of Stella McCartney Ltd., speaking from the company’s headquarters in London on Tuesday. “It has a charming English feel to it. That, with something interesting on the inside, is the concept. But we haven’t defined the concept in its entirety.”

The design for McCartney’s two other outposts has tended to vary according to the geographic location, clientele and physical space.

Like the New York store set in the heart of the Meatpacking District and the London boutique perched on a road not too far from Bond Street with several art and sculpture galleries, McCartney favors locations on the outskirts of developed fashion thoroughfares. Sources close to McCartney said she had been searching for a space for several months before settling on an area better known for its interior design acumen than tony fashion outposts. Rodeo Drive was never an option, she insisted last October, on a visit here to celebrate her Absolut ad campaign — and covertly check out the local real estate. Her most distinguished neighbors include Diva, a boutique specializing in modern Italian furniture, and Armani Casa, Giorgio Armani’s home concept.

“I think the L.A. girls get my stuff. I like it here, but you can’t hail a taxi,” she smirked back in October. “Now that’s a venture to consider — there’s definitely a market here for a good taxi business.”

Not that fashion clusters are far off. Two blocks south are Hogan, Ghost, Curve and dozens of other retailers that have turned Robertson Boulevard into one of the city’s hottest shopping destination. A block north sits high-end institution Maxfield on Melrose Avenue.

McCartney and her parent company, Gucci Group, have set out to brand the name with more than ready-to-wear. An as-yet-unnamed perfume is set to bow in June. Skin care and lingerie collections are under development and McCartney is focusing on growing her accessories collection made of non-animal alternatives. Footwear made its debut on the runway this month with “Suitable for Vegetarians” emblazoned across the soles. The store here is expected to dedicate rooms to the various categories.

Seuss said Gucci is behind McCartney’s retail expansion, but there are no other store openings planned for 2003. “We want a good balance between retail and wholesale and we want to make sure that we have the right product,” he said, noting there is room for future retail growth and priorities include Paris, Milan and Tokyo.

McCartney’s company is 50 percent owned by Gucci, with the designer owning the other half. As with other Gucci subsidiaries, the company declined to forecast the store’s first-year sales. But Dembo estimated annual sales at area apparel stores average between $600 and $700 a square foot. Assuming Stella McCartney reflects the average, the store could pull in between $1.8 million and $2.1 million in sales its first year.