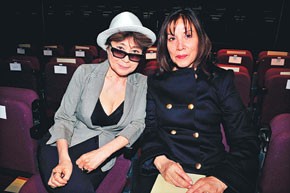 LIVERPOOL, England — The worlds of fashion and music collided in a spectacular way here Sunday with a McCartney double-header: a frisky, musical-chairs style show by Stella, followed by a rousing, hands-in-the-air concert by hometown musical hero Sir Paul.

“I wouldn’t say it’s double billing: I think I’m the supporting act,” demurred the designing daughter, who strung balloons spelling out “Stella [Hearts] L’Pool” over the stage at the Liverpool Institute for Performing Arts, the site of her afternoon fashion event and, formerly, boys’ school of her father and his brother, Michael.

“It’s so funny seeing Stella here in this building where we spent seven or eight years looking at that,” uncle “Mike” said as he snapped photos of his niece against a backdrop of classroom windows smudged with rain.

Despite the dreary weather, McCartney’s show was a high-octane affair, with the stage rocked by boy band Palladium, romanced by velvet-voiced singer Candie Payne and then ripped up by frenetic Cornwall dance troupe Flava.

Some 400 Stella fans, including some from as far away as Japan, turned out for the benefit fashion show, timed to coincide with Paul McCartney’s concert to mark Liverpool’s status as this year’s European Capital of Culture.

Backstage, as his daughter put the final touches on her looks, Sir Paul confessed to sometime pangs of nervousness on her behalf. But not many.

“She’s the biz,” he declared, gathering her up in a hug.

McLoughlin was mum on details about her wedding dress — she has an exclusive with OK magazine — but revealed plans to launch a makeup range and style guide this fall. And what exactly do Liverpudlians like to wear? “They like to be glamorous: make the most of themselves,” she explained.

For her part, McCartney cheered the fact that girls from northern England aren’t shy about showing off their legs and shoulders — and seemingly impervious to evening chill. “It would be great if everyone were like that. There’d be no need for fur coats,” she mused.

As McCartney signed autographs and posed for photos with fans, other guests filed downstairs for Champagne and a vegetarian brunch featuring her late mother Linda McCartney’s signature meat-free foods.

The Sunday events were a family affair, with Sir Paul’s convoy leading a tour of his childhood homes and other stomping grounds. “We could fill this entire auditorium just with my family and kids alone,” Stella McCartney, who had her three children in tow, said during rehearsals.

Later, the McCartney clan joined a raucous crowd of 36,000 at the Anfield football stadium for the Liverpool Sound concert, featuring The Zutons and Kaiser Chiefs before Sir Paul took to the stage for his first performance in Liverpool in five years.

“Is everyone looking forward to Paul McCartney?” hollered the Chiefs’ lead singer Ricky Wilson, a question met with a shriek of delight from his daughter.

But ever the working mom, the designer took a few moments to look over the lineup of models for her spring 2008 presentation slated for today in New York.