Kiefer Sutherland turned himself in to face an assault charge brought by designer Jack McCollough over a head-butting incident.

By Nick Axelrod and Matthew Lynch on May 8, 2009
View Slideshow 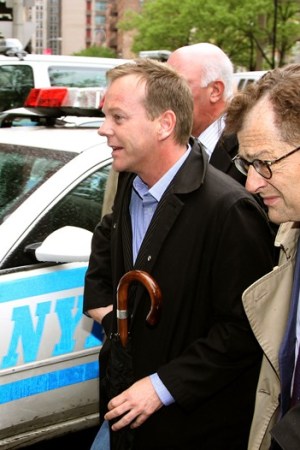 On Monday night, paparazzi swarmed the Metropolitan Museum of Art to take photos of Kiefer Sutherland and others on the red carpet, but it was an entirely different story Thursday afternoon. Dozens of shutterbugs and reporters huddled in the rain outside of TriBeCa’s First Precinct, awaiting the arrival of Sutherland, who was expected to appear to face an assault charge brought by Proenza Schouler designer Jack McCollough over a head-butting incident. And at around 4:15 p.m., Sutherland finally arrived. Emerging from a black car dressed in blue jeans and a black overcoat, he showed a slight grin when the swarm of photographers yelled at him, but walked briskly from the curb to the station door. Inside, police fingerprinted Sutherland and took his mug shots. After nearly two hours, during which he was formally charged with third-degree assault — a misdemeanor — and issued a desk summons, Sutherland was released. And with a few waves and smiles for the crowd, the actor slipped into the backseat of an idling car around 6 p.m. The case now moves to the District Attorney’s office. A court date has not been set.

Both Sutherland and McCollough attended the 2009 Metropolitan Museum of Art’s Costume Institute gala, as well as an after party at the Mercer Hotel’s Submercer Bar, where the “24” star allegedly struck the designer in the face early Tuesday morning for jostling fellow partygoer Brooke Shields. However, any wrongdoing on McCollough’s part appears highly questionable. When reached for comment, McCollough’s rep Pierre Rougier told WWD, “There was no altercation. This was a violent assault, pure and simple.” (And on Wednesday, Shields’ publicist told gossip Web site TMZ McCollough “did absolutely nothing to her,” adding, “It’s not clear what caused Kiefer to do what he did.” Shields herself was silent on the red carpet at the Leaves of Change event, as advised by her lawyers not to address the situation.)

While feuds are nothing new to the fashion biz, incidents of physical violence are few and far between (excepting the occasional Naomi Campbell flying phone). And when fists have been raised, the ensuing stories have ranged from serious, as with McCollough, to the absurd. Just take the recent travails of Kelly Killoren Bensimon, star of Bravo’s “The Real Housewives of New York City” (and Gilles Bensimon’s ex), who allegedly socked her 30-year-old beau Nicholas Stefanov during a quarrel in her apartment. Stefanov filed a complaint and Bensimon, who turned herself into authorities two days after the incident, was charged with misdemeanor third-degree assault, the same crime Sutherland now faces. (At a March 31 pretrial hearing, Bensimon entered a plea of not guilty.)

One of the least likely figures to get mixed up in an altercation (as victim, not perpetrator) was New York Times photographer Bill Cunningham, in the early Sixties when he was employed as a columnist for WWD. Cunningham had written about a personal appearance by Pierre Cardin at the now-defunct Bonwit Teller department store. The wife of Bonwit Teller president William Smith had apparently pitched in and given the salespeople on the floor a helping hand to manage the crowd scene, which Cunningham duly reported. William Smith evidently took great offense his wife was mentioned in such a context and actually punched Cunningham, an event that shocked the industry at the time.

Then there was the more amusing industry scuffle between Ron Galotti, then-publisher of GQ magazine, and Godfrey Deeny of Fashion Wire Daily. At a 2002 Etro trunk show at Bergdorf Goodman, Galotti, WWD reported, approached Deeny to air his grievances about what Galotti felt had been negative coverage of GQ in Deeny’s Internet pub. Or perhaps, others said, it was Deeny who was miffed he wasn’t invited to a 45th anniversary bash for GQ. Either way, things escalated when Galotti stepped on Deeny’s foot, setting off a shoving and punching match between the two middle-aged men, neither of whom, onlookers remarked, was an able combatant. After being physically separated from Deeny by attendees, Galotti got back to making the party rounds, even posing for a photo with Kean Etro in his mussed-up suit.

And perhaps one of the most outrageous fashion fights was at a birthday party for actress Rosario Dawson in 2006, when, according to reports, Tommy Hilfiger allegedly duked it out with Axl Rose after the Guns N’ Roses front man moved a drink belonging to Hilfiger’s girlfriend (or bothered someone in Hilfiger’s posse). The brawl was diffused by club security, who escorted Hilfiger out to the street. Rose was unharmed. “It was the most surreal thing, I think, that’s ever happened to me in my life,” Rose told Los Angeles radio station KROQ after the fracas.

Kiefer Sutherland is no stranger to legal problems — he is currently on parole in Los Angeles for a 2007 DUI charge for which he spent 48 days in jail. The “24” star could face more slammer time for Tuesday’s incident if found guilty here or in violation of his parole in California.