MCM is moving on up in the global accessories marketplace. 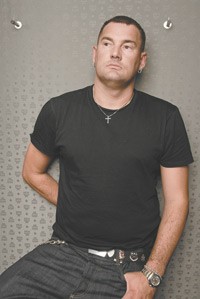 BERLIN — MCM is moving on up in the global accessories marketplace.

And that includes Berlin’s Kurfürstendamm, where the German accessories brand has relocated several blocks north to become a neighbor of Chanel, Chopard, Sonia Rykiel, YSL, Louis Vuitton and Hermès.

Founded in the Seventies by Michael Cromer in Munich, the logo-studded luggage and leather accessories brand exploded in the Eighties, slowed in the Nineties and then went into a decline. South Korea was the exception.

In that country, MCM license-holder and, since 2005, owner Sungjoo Design Tech & Distribution, has built it into a $65 million business. Sales in South Korea are up 45 percent this year, said Michael Michalsky, the former Adidas global creative director brought in by Sungjoo as creative director last year to jump-start the brand.

Michalsky was in Berlin to check on what he said will be “the nucleus, the blueprint for all new MCM stores.” A duty-free shop based on the Berlin model is to open next month in Seoul, the search is on for a new location in Munich and the MCM shop in Düsseldorf is slated for a renovation. The U.S., where MCM had a store on Rodeo Drive during its heyday, is in Michalsky’s sights for a small, selective launch a season or two down the road.

The Berlin store will officially open this month, including features such as a floor-to-ceiling curtain studded with 5,000 MCM badges for the back wall. Nevertheless, with MCM hot pink or black-and-white soccer balls sharing the spotlight with Michalsky’s first capsule MCM bag and ready-to-wear collection, the 1,000-square-foot store was making the most of World Cup action.

The new décor and merchandise is a far cry from the tacky image most Germans associate with MCM. Not that Michalsky has anything against tacky. “These days there’s no clear definition between good and bad taste, especially if it’s taken out of context,” he said.

The Barcelona chairs — now upholstered in MCM black vinyl — would probably horrify their creator, Mies van der Rohe, Michalsky admitted. “It’s a bit sacrilegious, a bit tongue-in-cheek, but we did it on purpose.”

Other new signature interior features: the black shag rug like the one Michalsky has in his TV room at home; the “futuristic baroque” black Murano glass chandelier with black tulle shades; the dressing rooms padded floor to ceiling with vintage MCM vinyl; the bare concrete floor; the monolithic mirror, and the windows that function like a glass wall opening directly into the store. “Especially with a brand like this we need to immediately invite people in or they’ll see MCM and say ‘Oooh,'” he said wrinkling his nose in mock horror.

While the brand still has to overcome image problems in Germany, MCM has been picked up by some important trend stores like Petra Teufel in Hamburg. And Michalsky was particularly proud of selling MCM “into 55 of the best stores in Italy” last season, and more important, selling out.

From the start, Michalsky has said that he wants to gear “this brand to where I and my friends would use it.” So what did he change? First, he got rid of the cognac monogram. Then he reissued the MCM black-on-black logo series, and came up with the Munich series. This incorporates a bi-color stripe — “like travelers used to paint on their luggage to identify their baggage,” he explained, as well as a heraldic Munich lion. He also pumped up the color, introducing the logo in white and raspberry or white and lime green.

The raspberry-white series is already a top 10 seller in South Korea, he said, “which tells me that people want a more youthful, funky feeling.”

Logos. Monograms. Michalsky can’t get enough. “I’m a kid of the Eighties. I’ve always loved monograms … and in accessories especially, people are interested in logos, which have been there a long time. They want something with history, whether it’s good or bad.”

MCM Holding is headquartered in Switzerland, with production in Asia and Europe, though Michalsky said “we’re in the middle of shifting more and more production to Europe.” As for design, “we’re doing it all over the world. It’s a small and precise team, and we meet in Milan, Korea, Berlin, wherever. I’m used to working like that.”