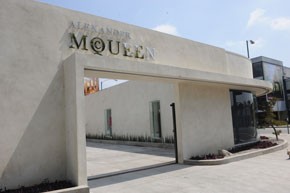 Alexander McQueen knows how to make an entrance.

The British designer has heralded his arrival on Los Angeles’ luxury retail landscape with his signature flair – installing a nine-foot-high metal sculpture of a naked man literally through the roof at his flagship at Melrose and Orlando avenues, which opens Tuesday.

“Angel of the Americas,” the stainless steel work by artist Robert Bryce Muir, is suspended from a circular skylight, its head, outstretched arms and torso visible above the structure’s rooftop. The lower body of the anatomically correct sculpture is inside the store.

“L.A., like London, has so many art collectors, and I wanted to give a focal point to the store,” McQueen said in an interview. “I was also inspired by the Jesus Christ statue in Rio de Janeiro. Los Angeles is the City of Angels and I wanted something to reflect that.”

The sleek and futuristic 3,100 square-foot space is clean and simplistic – architect William Russell’s signature handiwork – with a curved exterior façade and few straight lines to be found inside.

Hand-smoothed white plaster walls arch into cathedral-like vaulted ceilings, and clothing racks and display cases suspended from the ceiling give an ethereal floating effect to the fixtures.

Huge curved glass doors and curved windows bring a soft natural light into the space, which features muted tones and floors of gray terrazzo marble inlaid with mother of pearl. Speakers and ventilation are hidden, as are the store’s cash registers.

McQueen’s first store opened in New York in 2002, followed by boutiques in London and Milan. The brand has 20 stores worldwide, some franchises and others brand owned.