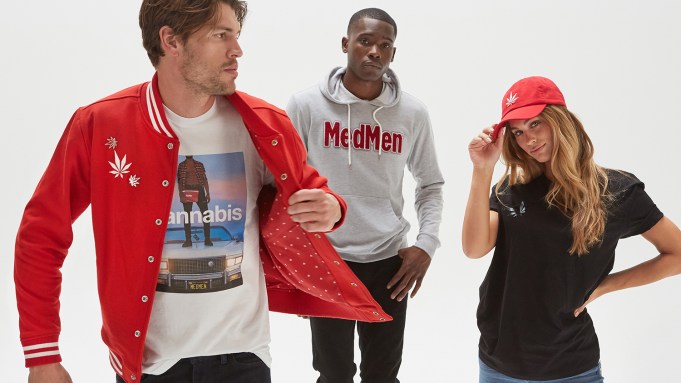 Is cannabis-branded apparel the next fashion frontier?

MedMen thinks so. The $2.2 billion cannabis retailer — with operations across the U.S. and flagship stores in Los Angeles, Las Vegas and New York — is launching its first clothing collection with eight pieces, $15 to $129, including a varsity jacket with custom pot leaf-print silk lining, a fleece hoodie, graphic T-shirts and a dad hat, plus a yoga mat, pins and key chains, all incorporating the signature red MedMen logo that is becoming its own in-the-know status symbol.

The full collection will be available online at Medmenshop.com — a different web site than the main one since, as a cannabis company it can’t process credit card transactions on its main site — as well as in MedMen stores.

The brand extension — from the purveyor destigmatizing cannabis with clean and minimal retail boutiques often compared to Apple stores — is the vision of MedMen president and cofounder Andrew Modlin, who leads the company’s 12-person design team at the Culver City, Calif., headquarters. The idea was driven, at least in part, he told WWD in an exclusive interview, by customer demand for apparel created for store employees, including letterman jackets and location-specific T-shirts featuring brand advertising starring cannabis users from all walks of life, from DJs to doctors.

But Modlin sees the collection less as the cannabis equivalent of a Starbucks souvenir coffee cup and more like SoulCycle’s in-house performance apparel line.

“It’s ath-leisure,” he said of the comfort basics. “We want to tie the collection into the overall wellness category and we want people to feel proud about wearing it,” he said, admitting that being the Supreme of cannabis clothing would be a dream, adding, “We’re the only cannabis company that can do this because of our scale.”

MedMen, which has more than 1,000 employees, owns and operates 20 licensed cannabis facilities in cultivation, manufacturing and retail. Its stock trades on the Canadian Securities Exchange. “We were the first cannabis retailer to have an all glass storefront instead of blackout windows, to make people feel like they are not doing something wrong buying cannabis. We’re doing the same thing with apparel, changing what you think you know about marijuana culture and who would be wearing it on their sleeve,” he said.

Marijuana for recreational use is legal in 10 states, including California but not New York, and the federal government still categorizes it as a Schedule I drug, like heroin, making interstate commerce impossible and brand-building challenging. But business has been booming around the country for beauty and wellness products infused with CBD (a non-psychoactive cannabis compound touted for a range of medicinal uses) that many retailers also sell, and which had increased visibility during this New York Fashion Week. There were Sakara Hemp chocolates on the seats at Jeremy Scott and Grassroots CBD goodies in Kitchen Toke gift bags at the Prabal Gurung postshow dinner. And legal or not, the smell of weed was thick in the front rows at Palm Angels, and other shows.

CBD products, fashion and accessories have moved out of head shops and into luxury stores including Barneys New York, which will open a cannabis lifestyle and wellness shop called The High End in its Beverly Hills flagship in March, selling an exclusive vape pen from Beboe, a range of CBD-only products (the retailer will not be selling products containing THC), jewelry and accessory items from sterling silver pastille dispensers to grinder necklaces from Hoorsenbuhs, Miansai, Barton Perriera and more.

“We see growth opportunities in this category across the board, whether that be from a product development, customer engagement or commerce perspective,” said Barneys creative director Matthew Mazzucca. “Cannabis is only going to become more acceptable and a bigger part of our customers’ lifestyles, so there is an enormous opportunity here.”

California, where MedMen is based, legalized recreational marijuana in January 2018, but the green rush hasn’t delivered the economic windfall some had hoped for, at least not yet, because of the level of taxation and burden of licensing red tape.

But Modlin said he’s pleased with MedMen’s growth, which includes plans to open a dozen stores in 2019. He left the door open for other lifestyle categories, too, perhaps even a hotel.

“Hospitality is already an interest. We call people who work in our stores ‘hospitality representatives’ because we want to bring a hospitality feel to the retail experience,” he said.

Asked if MedMen ever might appear on the fashion runway, Modlin didn’t rule that out either, saying, “Maybe one day. It’s only the beginning as more states legalize and open up opportunities.”

“As the cannabis industry evolves, it is only natural that brands will capitalize on their equity by beginning to merchandize apparel,” said Cynthia Salarizadeh, cannabis industry consultant/entrepreneur and managing partner of KCSA Strategic Communications, pointing out that cannabis producers like Beboe and Canndescent could also get in the fashion game. “It may not be long before we see celebrities wearing hemp couture by the House of Saka or high-end handbags created to carry your cannabis responsibly by Défoncé. As cannabis continues to trend into every industry, it will be interesting to watch how creative entrepreneurs capitalize on the opportunities.”