WWD goes behind the scenes with the man who lit up some of fall's biggest runway shows. 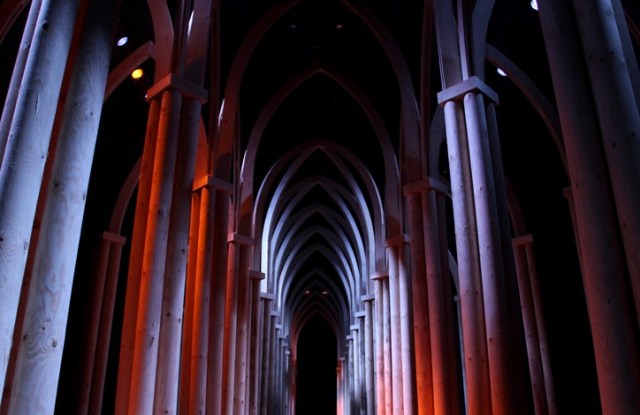 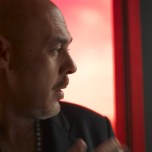 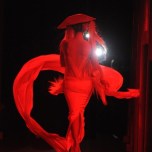 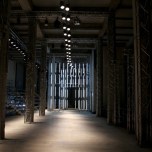 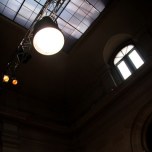 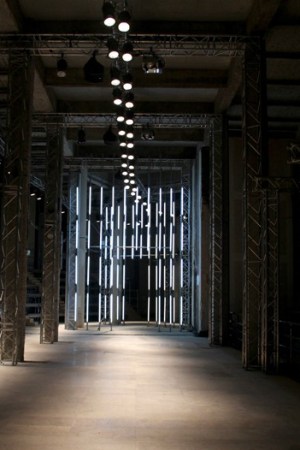 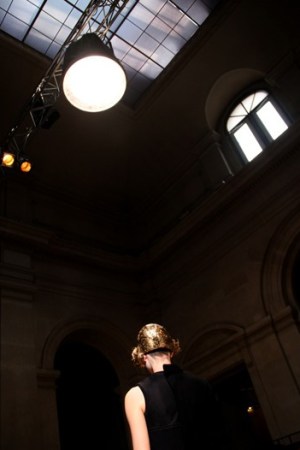 “It’s huge. It’s going to be such a sh-t show. The greatest show on earth is going to happen!”

This story first appeared in the March 23, 2011 issue of WWD. Subscribe Today.

That’s Lady Gaga speaking, to anyone who will listen, two-and-a-half hours before she’s due to walk in Mugler’s fall runway show at Gymnase Japy, an old gymnasium in Paris’ 11th arrondissement. The singer, dressed in a sheer black Maison Martin Margiela dress over a black bra and black underwear with her hair in an upswept beehive, is in tutorial mode. House creative director (and Gaga stylist) Nicola Formichetti is showing her how to vamp her way through the arch-filled runway. He writhes against one column like it’s a stripper pole. She follows and does her own take, in sky-high wedges. “The zeitgeist is here,” she utters, eventually being shuttled off to a private room backstage, aka locker room number three.

Closer to showtime, a leather jacket-clad man, burly enough to rival her security guards standing outside, knocks. “I’d like to speak to her,” he requests, and then is quickly ushered in. A few minutes go by and he’s out. “I told her how to be specifically on stage,” he explains, before correcting himself with a smile. “Not how to be on stage. She knows how to do that.”

If anyone can give Lady Gaga a few pointers tonight, it’s Thierry Dreyfus, the man who is running the show. Literally. He’s doing this with his colleagues Marie Meresse and Rodrick Diallo, who make up the core of Eyesight Paris, a production firm that handles everything from lighting to set design, including the imposing forest of pinewood arches on Mugler’s runway, which many in the press likened to a cathedral. “It has nothing to do with church or religion,” clarifies Dreyfus, 51, noting that the initial inspiration came from Rick Genest, Formichetti’s other muse who’s tattooed to look like a skeleton (thus the nickname Zombie Boy). “I thought of Gothic bones and then the lungs, breathing of a whale.”

And what about the criticism that it was difficult to see the clothes with the models winding in and out of all those pillars? “That was on purpose,” Dreyfus says. “To make people see, not see, see, not see. The object was frustration.” Come again? “If you want to see the collection, you go to the showroom, do you know what I mean? Do your job.”

Dreyfus, one soon learns, is far from filtered when it comes to his thoughts. On a motorcycle ride from the Rochas show, also an Eyesight client, to Mugler, for instance, he prattles on about John Galliano’s recent flameout from Dior. (If it wasn’t this reporter’s white-knuckled first time on such a ride, there might be more to that story.) At Mugler’s close, though, Dreyfus appears tapped out. “I’ve got no thought after the show,” he says. “It’s just the moment of crystallization for me.”

While the Mugler spectacle went down as one of Paris Fashion Week’s most entertaining, to Dreyfus, it was just one of his many jobs since the start of the fashion show circuit in New York. He was behind the cool lighting seen at Proenza Schouler and Versace, while he and his Eyesight team staged Alexander Wang’s runway setup and flagship launch party. In Paris alone, the company produced 16 shows, including Roland Mouret (chevron-patterned mirror runway), Vionnet (two-tone printed steps), Emanuel Ungaro (held at the Italian Embassy) and Arzu Kaprol (whose soundtrack included vocals by Dreyfus).

By the morning after the Mugler show, Dreyfus has somehow found the time to transform the barren basement of contemporary art museum Palais de Tokyo — known as “la friche” or “wasteland” — into a red-curtained, salon-style runway for Zac Posen. Later that night, he flips the cavernous space for Maison Martin Margiela, this time with high, bleacherlike seating rising in the middle. Surrounded by a dozen or so construction workers hammering and sawing away as the evening nears midnight, Dreyfus is overseeing the placement of every single spotlight for Margiela. A lot more complicated than that sounds, since even the flaps on each light are individually and precisely positioned. “There are two important things in lighting,” says Dreyfus in his gruff French inflection, which occasionally swings British. “The first is instinct — you learn by experience. And the second is that the sun is a warm light, the sky is a cold light, so daylight is a mix of the two.” Between puffs of Marlboros — many are consumed this week — he explains that he subtly adjusts the lights on the models and audience as the shows move from New York to Milan to Paris “because the skin is getting more and more tired” as the season continues. His show approach: “Audiences need emotion,” he says. “I take the fingerprint of the designer and put it inside the heart of the people.”

Aside from working with Eyesight (which also has a satellite office in New York), Dreyfus is best known as a lighting designer. He was the one responsible for Helmut Lang’s iconic runway brights and has lit everything from the Grand Palais 2005 reopening to fires in the fountains at the Château de Versailles in 2006 to Notre Dame Cathedral, which he plunged into darkness and lit from within for last year’s Nuit Blanche celebrations. Earlier this month, Dreyfus won a state bid to create an installation in Northern France later this year and, after that, he’ll get started on a 2012 lighting project planned for Istanbul’s historic Galata Tower.

“With his use of lights,” says New York-based artist and friend Simon Chaput, “Thierry makes you see things in ways you’ve never seen before.”

Born in Paris and raised in the countryside near Chartres, Dreyfus notes that his entrée into the field was largely pragmatic. At 19, he began assisting Hervé Audibert, who was then the lighting designer at the Strasbourg Opera. “The door was open and I went inside. At the time, you worked, nothing else,” he recalls. “There’s no ‘When I was a baby the sun come in my window’ story.” Still, there was one opera in particular that he helped stage at Nantes where “I remember trying to think about how to do more with less lamps as possible,” says Dreyfus, who sports an oversize tattoo with the word “Silent” on his left forearm. “It was about the images and emotion.”

That same year, in 1985, American designer-in-Paris Patrick Kelly asked Dreyfus to light his first show; he did so with a dramatic backdrop of candles. From there, the Parisian acquired more and more fashion clients and fewer and fewer theatrical ones. “They didn’t ask me to work with them anymore,” he says. “At that time, if you go in fashion you were a commerçant and no longer somebody who belonged to the [theater] family.”

He could have done worse. Dreyfus has spent nearly three decades working in fashion. The highlight, he says, was producing Yves Saint Laurent’s final hour-long couture show-slash-retrospective in 2002, which ended with Catherine Deneuve rising from the front row to sing a cover of “Ma Plus Belle Histoire D’Amour” by famous French chanteuse Barbara. Few know this, but Deneuve’s turn at the microphone was Dreyfus’ idea, one he kept a secret from nearly everyone, including Saint Laurent and partner Pierre Bergé. He talked Deneuve into the performance by spontaneously bursting into song himself over dinner. “Can you imagine the stress? No one knew,” says music producer Henri “Scars” Struck, who collaborated with Dreyfus on the show. “The emotion in the room was unbelievable.”

Ask Dreyfus to compare his experiences working with designers as far-ranging as Jil Sander’s Raf Simons, Andrew Gn, Miguel Adrover, Hedi Slimane and a pre-Givenchy Galliano, and he nonanswers, “How many boyfriends do you have?” He does admit, however, that his most challenging show during the Paris collections is Rei Kawakubo’s Comme des Garçons, “as usual.” He can only see the collection for the first time the day before, during a nearly silent dress rehearsal. Kawakubo doesn’t explain her concept and Dreyfus doesn’t ask. “It’s like seeing a piece by Maurizio Cattelan or Gerhard Richter,” he says. “You don’t need to have the art explained to you to have a connection.”

That night, Dreyfus will work on her lights until 1 a.m. (creating a moon- and sunlike fixture to complement the gold touches throughout), before motoring off to build Cacharel’s complex set with the rest of his Eyesight team and then, at 6 a.m., onto Tsumori Chisato. By the time Kawakubo’s show rolls around the next afternoon, Dreyfus announces that he has not slept. No matter. “My work is my breathing,” he remarks.

In addition to his self-described role of “supplier in fashion,” Dreyfus is an artist, photographer and product designer. He just closed his first solo exhibit in New York and in April will move on to Milan for Euroluce, the international lighting show, where he will unveil a new lamp with Flos, inspired by a table he designed for last year’s Design Miami/Basel showcase in Switzerland, which was in turn inspired by artist Lucio Fontana. He hopes to make a video to accompany the Kaprol track. And sometime next year, perhaps earlier, he plans to also release a book of his photography.

But that won’t be his first time working in publishing. In 2007, he wrote a memoir, published it and then decided he didn’t want anyone to read it. “I think it was too private,” he says. So he bought the whole lot and had it destroyed. But it wasn’t all for naught — he ultimately made an art project out of it, filming the books’ destruction at a recycling plant outside Paris.

“It was destroyed at the same moment as the telephone books,” he recalls. “A lot of sh-t was going on in there. For me, it was such emotion.”